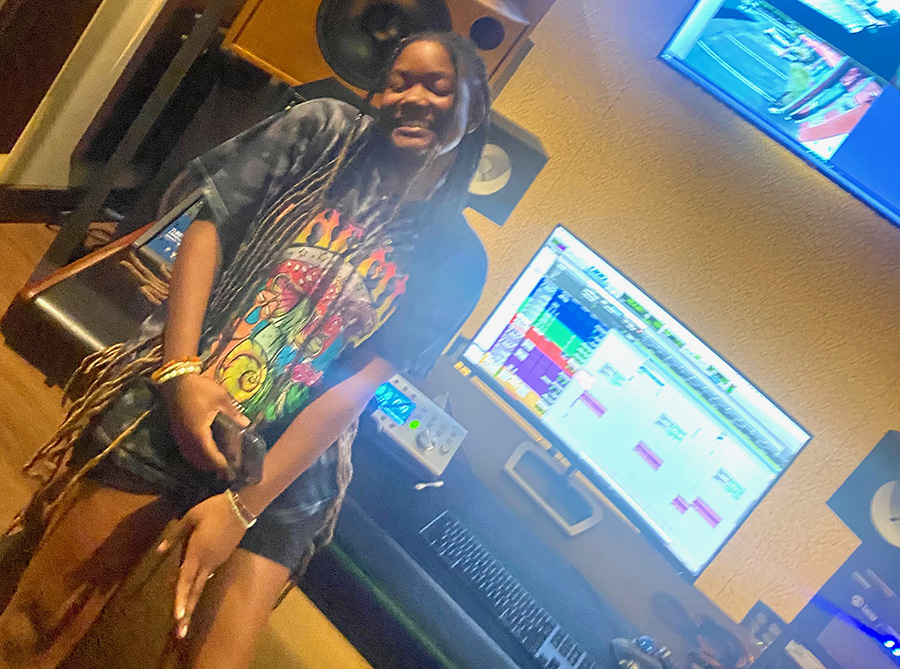 In October of last year, senior Christine Jackson released her new song “Money Showers” on Soundcloud. The song talks about Jackson and her successes and, much like the name, making money.

What was the creative process like in creating the song?

I was at [senior Kaden Milne’s] house. We were making music for a long time and just started writing. That was pretty much it.

Recording it was fun. It was kind of new and I didn’t really know what to do. [B]ut then we get to this studio in Atlanta and we met this guy named Trey and he kind of just walked us through everything. I was really picky about it when I was recording it, but he was like, “That’s what you’re supposed to do.”

Is this your first time recording a song?

Yeah, in a professional studio. I’ve written a lot of songs, but I haven’t really recorded any songs besides the ones we did in that one session.

Are you wanting to do more with recording songs and releasing them?

Yeah, I just need money. It’s an expensive process and I have a job and then I have school, so I have to find time out of my day to go do stuff.

Can I ask why?

Well, Nicki Minaj is Nicki Minaj. I like Doja Cat’s style and the way she raps. J Cole… like the way he does bars and stuff, that kinda made me wanna do stuff like him. He was the first rapper I ever really learned [from] and the first rapper I ever really memorized lyrics to, him and Notorious B.I.G. So like some of the songs, other than the [one] you listened to when I do more lyricism stuff it kinda is based [on]- I’m like not imitating him but [I] kinda like get inspired off of him. As for the other stuff I want to do in life besides music, [because] music is like the basis thing, but I feel like something I really want to is kinda be like an all-around type entertainer. Which means like, clothing line, doing stuff like having businesses, and I get that kinda inspiration from other people outside of music like Kylie Jenner [and] other people.

Who would you compare your sound to?

Um, I don’t know. When we were in the studio, Trey said I sounded like Jack Harlow in some parts. I really love Jack Harlow. That’s another one of my inspirations. I still am figuring out my style myself, so I don’t really know who to compare it to.

What is the song about?

The song is about… I don’t really know. Honestly… okay that’s not true. The song is about like, uhh me, and me being good at what I do and basically, me lowkey bragging but not really bragging. [It’s] about how I’m not above that but like different than that. How when I talk, I actually am saying something, and it’s [also] about making money, which I like to do.

When you were writing this song, how did it come about?

Kaden was there. [For] all the songs that I write, Kaden is usually there. But surprisingly enough, a lot of the songs I also write are just bars that I’ve written out of nowhere. When I’m bored they’ll just come to my head and I put them all together. That particular song I had actually written all in one session. We went to the studio two months after I had made it, and we had actually made a rough draft of the song that was the basis of how I wanted it to sound. The engineer, who I mentioned earlier, Trey, he put it all together which was fire. We were just in Kaden’s closet, no weird type stuff, but we were in his closet and we were thinking of how I wanted to put [out] the first song I released. Like how I wanted it to sound [and] what I wanted to be the basis. We wanted the introduction to be something that had a vibe to it where you could listen to it a lot of different areas. So we found the beat and we just started writing. My inspiration for that song specifically was Travis Scott. It kinda had a Travis Scott kinda tone to it, because that was the type beat he has.

What does the song mean to you?

Well, the day I released it, it was a random day. I hadn’t planned on releasing it. I actually planned on never releasing it. Kaden kept telling me to, but I never wanted to. So then one day I was just in school, sixth- uh, fifth period and I don’t know, I saw a video of one of my favorite artists and they were talking. It was like a documentary-type thing and it kinda just inspired me. And a couple days before, I had been talking with Kaden about art, like cover art, so I just had the last one that we chose. I just released it on Soundcloud and I just told everybody about it because I figured if I really wanted to do this, like actually make this a career, then I just had to get over all that so I just released it. To me, it means getting over being afraid to do stuff. Kinda like taking a leap, so to speak, and just doing what I wanted to do and not really worrying about what anybody would say.

What was the inspiration for the cover art?

Well, there was a lot of different cover arts that I made and they were all dookie so the last one was this- I kept, obviously you know, I kept showing Kaden because he’s my right hand and he was like, “No, it’s not the style,” and then he would tell me why he thought that and I would agree. So we kept changing it and changing it and then the last one that we came up with, it was like an issue with whether to put stars on it. I asked everyone around me, and some people were saying no stars, some people were saying stars but I like the stars so I put the stars on there. One of the pictures on there is the dollar, or it’s the hundred-dollar bill which obviously the song is “Money Showers,” so that’s gonna be on there. Another picture is me and Kaden as children put over the faces of Kanye West and Lil Pump in their little costumes that they did for that one song. We like that picture and we’re like Lil Pump and Kanye, so I put it on there. I think there’s a dog on there and I like the dog so we put the dog on there. That’s one of my favorite memes. It’s just something I wanted to just do for fun.

What is your and Kaden’s partnership like when it comes to making music?

We’ve been friends since freshman year and before freshman year I wanted to do music but I didn’t really want to do music. It was just something I had thought about. It wasn’t really anything that I was actually seriously planning on doing. Beforehand, I just had a whole bunch of songs with no real direction. Then I met Kaden and he had no direction whatsoever so we just clicked and we became best friends. We kinda just had the same personality and like the same goals that we wanted to do in life and he motivated me to actually take the music seriously. So, he’s always around, everywhere I am. I write something and I put it on the beat, and he tells me if it’s hitting or if there’s anything I need to change or if there’s any input he can give me. When we were at the studio I kept getting nervous and not wanting to do things and [almost] wanting to back out. He was the one who kept reassuring me that this was a good thing to do.