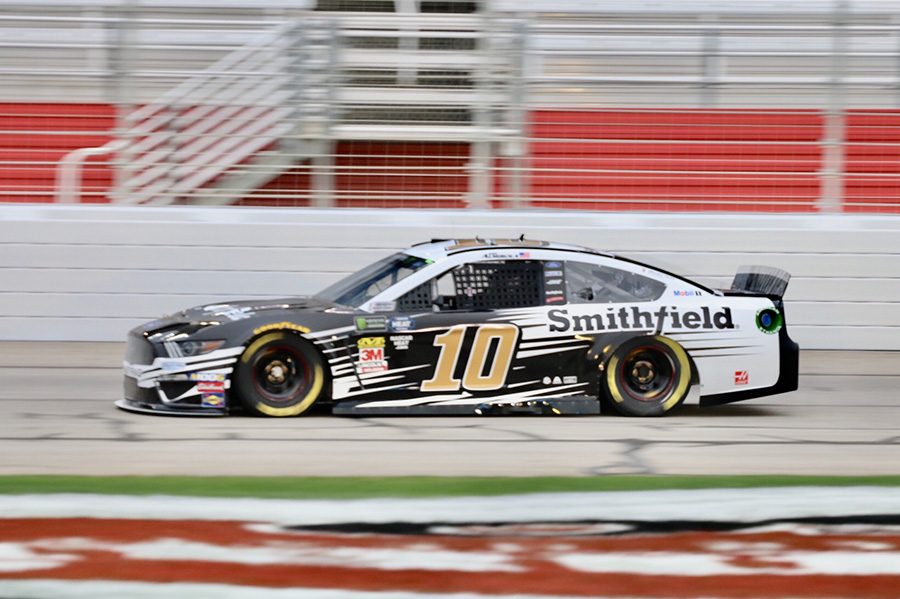 Aric Almirola, driver of the No. 10 Smithfield Ford for Stewart-Haas Racing, won the pole with a time of 30.550 seconds. He lead a pack of Fords that crowded the top five spots, with Denny Hamlin’s No. 11 FedEx Ground Toyota for Joe Gibbs Racing being the only non-Ford top-five finisher.

After monopolizing the Monster Energy NASCAR Cup Series practice on Friday, it was Ford that had drivers littered throughout the top finishers after qualifying. Most notably, Aric Almirola, in the No. 10 Smithfield Ford for Stewart-Haas Racing, finished first with a time of 30.550 seconds and a top speed of 181.473 mph.

“We had a really good car right off the truck and carried that speed through the final round,” Almirola said. “We knew our car had a lot of raw speed in it.”

His Stewart-Haas teammates, Clint Bowyer, in the No. 14 Haas Automation Ford, and Daniel Suarez, in the No. 41 ARRIS Ford, finished in third and fifth place, respectively. Bowyer finished with a time of 30.730 seconds, and Suarez trailed closely at 30.763 seconds.

“It doesn’t matter what rules they throw at us, at the end of the day it’s about people,” Almirola said. “That’s one of the best parts of our organization–you give 400 really talented employees a challenge with a new race car, a new rules package from NASCAR, and they just go to work.”

Rounding out the top five, Ricky Stenhouse Jr. finished second in the No. 17 Little Hug Ford for Roush Fenway Racing with a time of 30.727 seconds. In fourth, Denny Hamlin, driver of the No. 11 FedEx Ground Toyota for Joe Gibbs Racing, finished with a time of 30.744 seconds at a top speed of 180.328 mph.

“[The speed of our team] says a lot about organization, the hard work in the off-season, and the effort put forth,” Bowyer said.

Kyle Busch in the No. 18 Snickers Creamy Toyota for Joe Gibbs Racing finished in sixth place with a time of 30.810 seconds. Behind him was Kyle Larson in the No. 42 McDonald’s Chevy for Chip Ganassi Racing who finished at 30.827 seconds and reached 179.942 mph. Kurt Busch, driving the No. 1 ComSurv Chevrolet for Chip Ganassi Racing, came in eighth with a time of 30.835 seconds. Completing the top-10 were Martin Truex Jr. in the No. 19 Bass Pro Shops Toyota for Joe Gibbs Racing who finished at 30.852 seconds, and Austin Dillon in the Dow Chevy for Richard Childress Racing who placed tenth at 30.869 seconds.

Jimmie Johnson in the No. 48 Ally Chevrolet for Hendrick Motorsports rebounded from a poor practice and finished 11th. His time and speed were 30.900 seconds and 179.417 mph, respectively.

“This place is challenging because you’re constantly working on how you work the throttle and how [the car] is underneath you,” Dillon said. “This track eats tires alive, and you’re really going to have work mechanical grip now.”

Last year’s race winner, Kevin Harvick, driver of the No. 4 Busch Beer Ford for Stewart-Haas Racing struggled in practice and qualifying. After battling handling in the opening practice session, he finished 18th in qualifying with a time of 30.991 seconds.

These drivers will hit the track one more time on Saturday with final practice scheduled to start at 1:20 p.m.