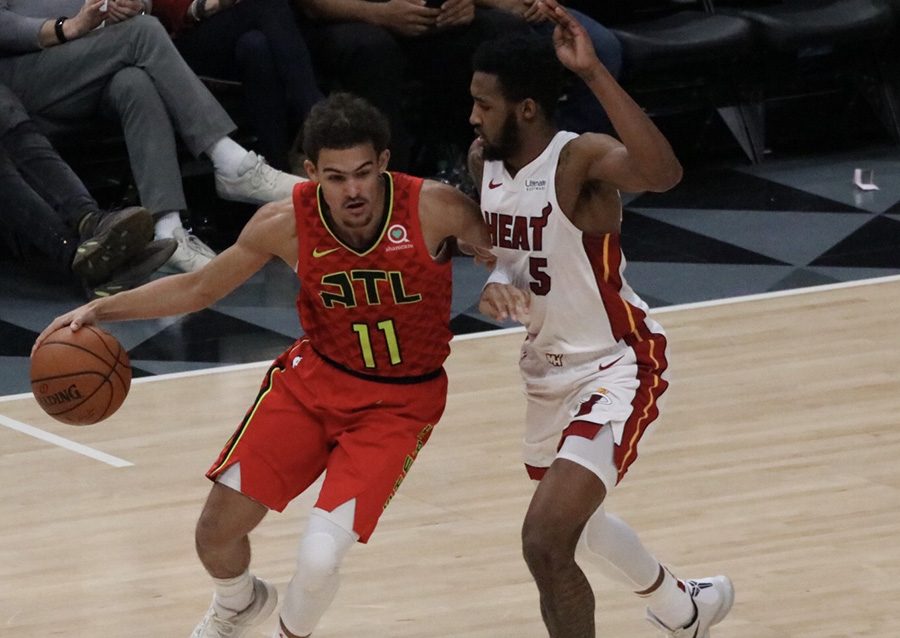 Miami Heat forward Derrick Jones Jr. defends against Atlanta Hawks rookie guard Trae Young. The two led their respective teams in scoring. Young led the Hawks with 19 points, and Jones contributed 14 for the Heat. The 106-82 win was the third time this season the Hawks defeated the Heat.

After defeating the Miami Heat in the first two meetings of the season by a slim margin both times, the Hawks defeated the Heat 106-82 Sunday night in a game where three pointers made the difference in a dominant third quarter performance.

Rookie guard Trae Young led the Hawks in scoring with 19 points and went 2-2 from the three-point line in the second half, as well as contributing two assists throughout the game.  Forward and center John Collins led the team in rebounding with 13. Collins shot 5-6 from within the arc.

“You have to give credit to Atlanta and their locker room in all three games,” Miami Heat head coach Erik Spoelstra said. “They just played at a different pace and intensity level and urgency level than we have and we paid the price in all three games.”

Atlanta started every quarter with a basket, but in the first half, they struggled to prevent the Heat from scoring or finding the right shots. In the second half, the Hawks dominated the scoring, and they were able to sink shots. The difference in the game came down to the number of three-point shots Atlanta was able to make in the third quarter.

Throughout the game, Atlanta led in rebounds and ended the game with 51 rebounds. The game against the Heat is the seventh game out of the last 10 that the Hawks have had over 50 rebounds.

“I thought neither team scored in the first half,” Hawks head coach Lloyd Pierce said. “It was just 31 percent and 32 percent for them in the first half so none of the shots are falling, which helps your defense.”

The Hawks dominated the first five minutes of the game, as they jumped out to a five-point lead with Young scoring all five points.

Miami called a timeout with seven minutes left in the first quarter, after Atlanta had scored five out of the first 12 shots that were taken. However, out of the next 12 shots that the Hawks took, only two fell in the basket. On the other hand, Miami scored two baskets right after the timeout to attempt to push back against the Hawks.

“I thought we played casually on the offensive end tonight as we had a lot of turnovers and took poor shots,” Spoelstra said. “These are things that ailed us early in the year and they all seemed to come back and all that came down on us in the second half and the Hawks totally outplayed us tonight.”

The second quarter started with a 9-0 run for Miami, and they scored five free throws by the time that the Hawks were able to score. Atlanta scored for the first time of the quarter with eight minutes left. The lead changed four times throughout this quarter, and the two teams were tied three times.

The change from the first to the second quarter was the number of turnovers for the Hawks. In the first quarter, the Hawks had four turnovers, but in the second, they had nine. Miami used these turnovers to keep control of the ball the majority of the quarter. At the half, the Hawks led by one point, 38-37.

“He told us at halftime that all of the guards were coming off ball screens and looking to pass to the bigs and [Miami was] getting deflections and turnovers,” guard and forward Deandré Bembry said. “At halftime, he told us just attack the rim and be aggressive and that’s what we were doing.”

In the first half, the Hawks were unable to consistently find shots and keep the Heat at bay. However, the second half was dominated by Atlanta, and the Heat was unable to sink shots. This domination was really seen in the third quarter when the Hawks outscored the Heat 41-21.

“I’ve called [Lin] a stabilizer all year,” Pierce said. “He changed the pace of the game. It’s a little bit slower. It’s more under control. He’s effective getting downhill in the paint.”

The largest lead that the Hawks had throughout the entire game occurred in the fourth quarter when they opened up a 30-point lead. Miami was only able to slightly battle that number back down to 24 to end the game with a score of 106-82.

The Hawks have now defeated the Heat three times this season, and have a record of 12-27 overall.

Miami will face the Denver Nuggets next tomorrow at 7:30 p.m. This game will be the first of two games against the Nuggets this season. In the 2017-2018 season, the two teams split the series, and the Heat is 33-29 all-time against the Nuggets.

The Hawks will face the Toronto Raptors tomorrow at 7:30 p.m. In game 19 of the season, Toronto and Atlanta faced off for the first time of the season, and the Hawks lost 124-108. Atlanta currently has a 45-42 all-time record against the Raptors. The game will be televised on Fox Sports Southeast.