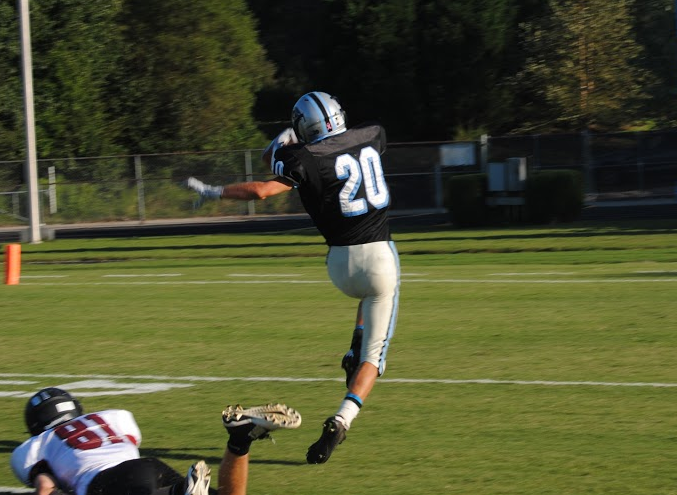 A second quarter touchdown pass by Panther freshman quarterback Sean King keeps the game against Whitewater from being scoreless at halftime. The game was a defensive battle, ending at 15-8.

The Starr’s Mill junior varsity football team started their season with a win, beating the Whitewater Wildcats 15-8 at home on Sept. 17. The first two of their scheduled games were rained out, so this was the first competitive game for the Panthers.

The first game was a learning experience, especially on the offensive side of the ball.  “We learned where certain kids can play certain positions,” head coach Shane Ratliff said. “We learned a little about what we actually have as a team. We kind of figured out what we do well and hopefully take it to the next game.”

The start didn’t look good for the Panthers, as Whitewater’s Jamal Jenkins nearly took the opening kickoff 100 yards for a touchdown. However, sophomore Johnny Muska knocked the ball out of Jenkins’ hand, causing him to fumble the ball out of bounds in the endzone.

On the ensuing drive, the Panthers made consecutive first downs, keeping the ball and moving down field. The drive stalled, however, when Whitewater’s defense intercepted a pass from freshman quarterback Sean King.

The Wildcats could do little on their next drive, as the Panthers held them to a three-and-out, forcing them to punt.  The first quarter ended in a 0-0 tie with both defenses showing some strength.

To start the second quarter, the Panthers continued to drive down the field, but the drive stalled and they were forced to punt.  The offensive struggle continued throughout the quarter with both teams trading possessions, but neither team could find the end zone.

The Panthers broke the scoreless tie when King connected with junior wide receiver Kennon Golden for the first touchdown of the game with 31 seconds left in the second quarter. However, the Panthers missed the extra point and took a 6-0 lead into halftime.

To start the third quarter, Whitewater, starting almost inside their own endzone, tried to run the ball, but the Panther defense forced a fumble. The defense caught the ball in the endzone for a safety, increasing their lead to 8-0.

Through the rest of the third quarter the Panthers stuck to the ground attack and kept the clock running.  The Panthers held onto their 8-0 going into the fourth quarter.

Early in the fourth quarter, the Panthers increased their lead when King scored his first rushing touchdown of the game. The extra point put the score at 15-0.

“I’m hoping that one of the things we will learn is resiliency, and that they can take a little bit and then bounce back and play really well with it,” Ratliff said.

Whitewater had the ball again, and it became a must-score situation for the Wildcats. Eventually, the ball was handed off to the Wildcat’s running back Ali Musa, who ran the ball and scored their first touchdown of the game. However, the extra point was no good, making the score 15-6  with 7:07 left in the game.

Following a safety by Whitewater, making the score 15-8, the Panthers repeatedly threw the ball to freshman wide receiver Austin Shriver to try and chew the clock. However, the Whitewater defense stopped the Panthers.  After the punt, Whitewater took over with a chance to tie the game.

On the next drive, Whitewater completed a pass to Jenkins, but fumbled the ball after being tackled by Starr’s Mill  junior Justin Yoggy. Sophomore Charlie Mizzle recovered the ball as the Panthers regained possession and the opportunity to seal in their victory.

The Panthers ran the ball and  picked up first downs to drain the clock and end the game.  This gave the JV Panthers their first win of the season, beating Whitewater 15-8. The Panthers started their season with a win, wanting correct their mistakes for the next game.

“[I’m] hoping that we will improve offensively,” Ratliff said.

However, the Panthers, on their next game lost to the Northgate JV team ending with a close score of 14-27. The Panthers played Sandy Creek next and did not bounce back as Ratliff hopes, ending with a score of 7-42.

Their next game is against McIntosh County Academy on Thursday, Oct. 15 at home starting at 5:30 p.m.