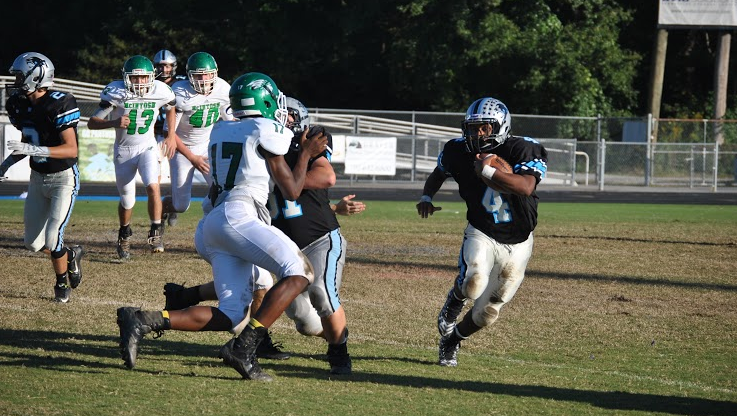 Sophomore running back Nick Brown races for the sidelines in attempt of reaching the first down.

The junior varsity football team concluded their 2-3 season with a disappointing loss on Oct. 15 to cross-town rival McIntosh. “A lot could be learned from this game,” head coach Shane Ratliff said. “We can transfer this experience into next season.”

The opening home game against Whitewater played on Sept. 17 resulted in a 15-8 win for Starr’s Mill and started off the season strong. However, the spirits fell after two consecutive losses to Northgate and Sandy Creek. “Although those losses came at an unfortunate time right before McIntosh, it did push us to prepare harder for McIntosh,” Ratliff said.

The game consisted of smash-mouth offenses and an intense rivalry. Starr’s Mill received the ball on their first possession, but after driving past McIntosh’s 40 yard line, Starr’s Mill threw an interception. Although Starr’s Mill’s defense forced a three and out, McIntosh quickly regained possession with a three and out of their own.

The Chiefs drove down the field through their option game. With only one pass attempt– which the quarterback threw away– the Chiefs managed to reach the red zone. Although a holding penalty pushed them back, in two more plays the Chiefs scored a touchdown, putting the first points on the board.

“Our players hadn’t seen the option run much this season,” Ratliff said. “Defending it is a high priority next year.”

The half would end with a 7-0 McIntosh lead, and the coaches were unsatisfied.

Unfortunately for the Panthers, McIntosh returned the kickoff for a touchdown to start the second half. However, the Panthers would not give up. After McIntosh’s touchdown, Starr’s Mill received the kickoff and began driving down the field. After several rushes for first downs, the Panthers finished off the drive with a 20 yard touchdown pass from quarterback Carson Walter to wide receiver Kennon Golden.

Now with the lead cut to 14-7, the Panther’s defense was eager to stop the option attack, but it proved too difficult to slow down. Starr’s Mill initially halted the Chief’s offense to three consecutive third downs before they reached the 50 yard line.

It took three plays for the Chiefs to score again. The quarterback kept the ball every play until extending the lead to 21-7 with a 15-yard run.

“It’s been an issue all year,” Ratliff said. “We would get so close to making a big stop on defense or converting to keep our drive alive. It’s definitely something we will work on going into next season.”

The next Starr’s Mill possession would end in a fumble at midfield, setting up another scoring drive for McIntosh. A 30-yard gain by the McIntosh running back immediately followed the fumble. Although the Panthers stuffed the quarterback for a loss, in the next play the McIntosh quarterback kept the ball again, this time reaching the 7-yard line. McIntosh finished off the drive with a 7-yard quarterback touchdown run. Victory seemed inevitable for the Chiefs, but the Panthers continued to play hard.

Starr’s Mill immediately threw down the field to Golden for a 30-yard play. The Panthers attempted one run play and two pass plays, all of which gained only nine yards, and they eventually faced a 4th down and 1, but a bold run up the middle resulted in a Panther first down. The next play was a slant route ran by Golden where he caught the ball about 10 yards short of the endzone but juked his way in for a 20-yard touchdown.

The following onside kick was unsuccessful, but Starr’s Mill once again had the ball with 1:25 remaining in the game. The Panthers’ last drive ended in the second interception of the game, finalizing a 28-14 defeat.

With the end of this season, returning players cannot wait for next season. Although the game offered experience, “the loss stung,” sophomore running back Mitch Provant said. “We came into the game hyped and faced an unexpected loss.”

For players hoping to join varsity next year, they will miss their current teammates next year. “The team we had this year was full of great teammates,” Golden said. “I felt like a leader for the underclassmen this year, and I’ll miss the opportunity next year.”

The junior varsity team ended their season with a 2-3 record, but they have plenty to look forward to next season. The team as a whole agrees there was more they could have accomplished this season as far as wins go. “We were all disappointed, we all felt we should have performed better,” Ratliff said. “This group has the potential to play great football.”