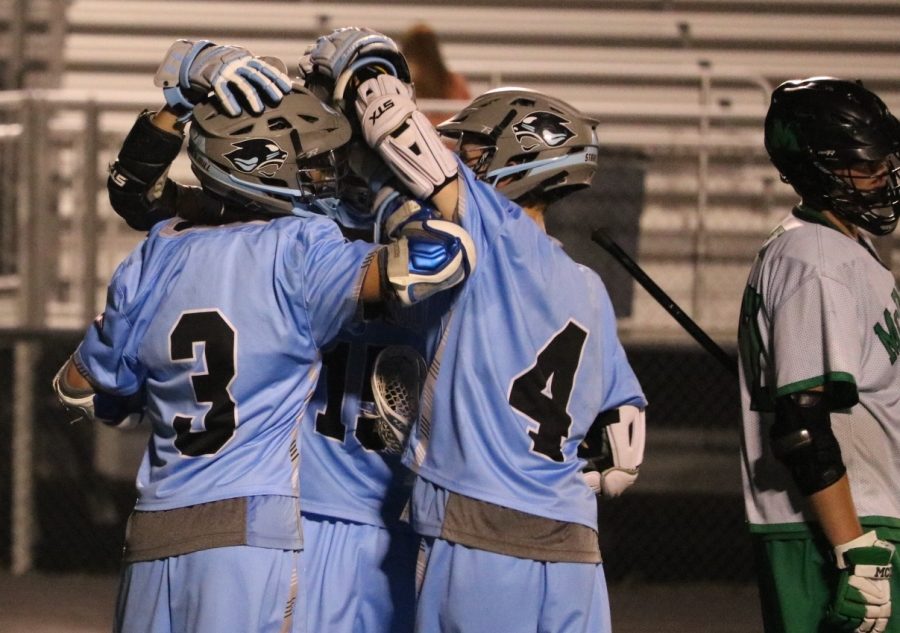 It seemed as if all odds were against the Panthers. They had never won their area, they had never beat McIntosh two years in a row, and they had never managed to win a game in Chief Stadium. However, the Panthers lacrosse team put all of that behind them on Thursday at McIntosh. A strong second half led Starr’s Mill to a 15-10 win over the Chiefs, and their first ever area championship.

Starr’s Mill went into the game outscoring their opponents by an average of 14.8 goals, but the 12-5 Chiefs were ready to compete with the 14-2 Panthers. Despite the records, the winner of the contest would be crowned area champions.

Junior Garrett LeClaire led the way for McIntosh, scoring five goals for the Chiefs. Sophomore Tanner Price added two of his own goals during the match. However, a scoreless third quarter put the Chiefs out of the game.

Junior Avery Jenks scored five goals for Starr’s Mill while juniors Joey DeLuca and Ryan Cockes each tacked on two more goals. Sophomore goalkeeper Derek Saylor played a great game and earned the game ball from Schmidlkofer. Defense would prove to be the key factor in the Panthers’ win.

“It [took] a lot of hard work,” Schmidlkofer said. “[It required] a lot of work at practice. No one gave this to them.”

The Chiefs started quick, and within the first minute of the game LeClaire scored his first goal. The Panthers responded with four goals over the next 10 minutes, three of which were scored by Jenks. They used long possessions to catch the Chief defense off guard. Price scored his first goal with seven seconds remaining in the first quarter to cut the Panther lead to 4-2.

Sophomore Logan Sandal opened the next quarter with a quick goal to bring the Chiefs within one. Three minutes later, senior Evan Torres answered with a score of his own for the Panthers. McIntosh started to disrupt the Panther offense and eventually tied the game at 5-5. Senior James Outlaw and Torres traded goals in the last three minutes of the half, and the score was 6-6 at the break.

After halftime, the Panther defense stepped up. Saylor made multiple saves and Starr’s Mill simply out-hustled McIntosh. Jenks scored the first goal of the second half, and his strike into the net would give the Panthers the lead for good. Senior Justin Yoggy and DeLuca each added a goal, giving the Panthers a 9-6 lead after three quarters.

“Talent wins games,” Schmidlkofer said. “We [as coaches] just try to guide them in the right direction and get them playing together.”

Jenks’ fourth goal gave the Panthers their largest lead of the night, and junior Ethan Sack followed up with another Panther score. Price stopped the 5-0 Panther run with his second goal, cutting the Chiefs deficit to 11-7. However, Sack was able to answer with his second goal of the match. Both teams traded goals for the last eight minutes, but when the buzzer sounded, the Panthers were champions.

“McIntosh is kind of the king of the county in lacrosse,” Schmidlkofer said. “They always have been. We were very fortunate to win tonight.”

Up next for the boys is East Coweta tonight. The Indians look to spoil Senior Night in Panther Stadium. Following that match, the Panthers host the first two rounds of the state playoffs. Seeking redemption, the Panthers are on the prowl for a state championship.

On the girls side, the Lady Panthers took an unblemished record onto McIntosh’s home field. After blowing two multi-goal leads, the Panthers rallied in the last two minutes to steal a game from the Chiefs.

Trailing 13-12 with under two minutes left, freshman Ryanne King attempted to throw a pass over goal, but the Chief goalie accidentally deflected the ball into the goal. Then, in the last 30 seconds of the match, the Panthers scored once more to squeak by the Chiefs 14-13.

The win dubbed the Lady Panthers area champions as well, and their first two playoff games will be played in Panther Stadium.

Both lacrosse teams have earned home field advantage for the first round of the postseason. Opponents, dates, and times have not been announced.