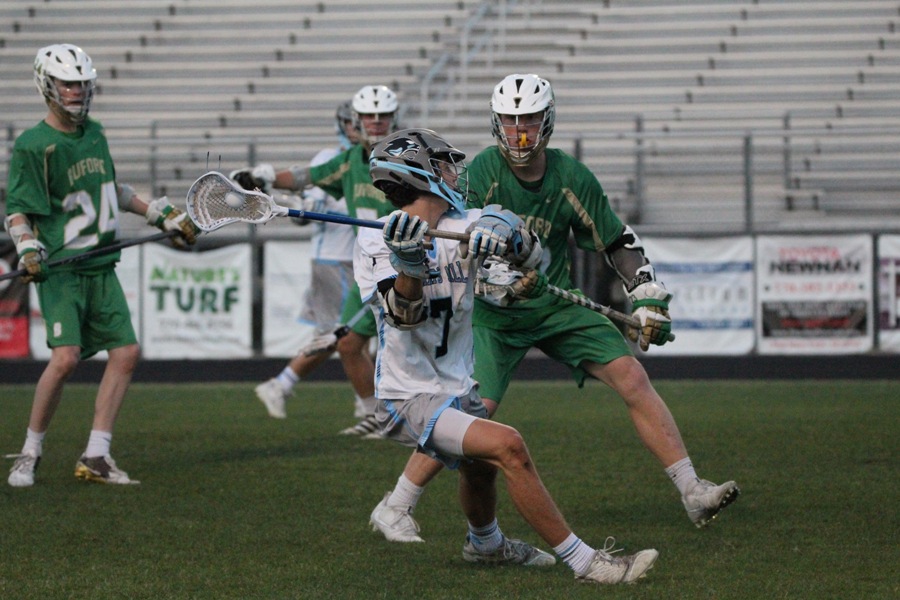 Senior Evan Torres lines up a shot during the match against Buford. Torris led the way for the Panthers, scoring four goals in their 16-11 victory.

Around this time last year, the Starr’s Mill lacrosse team took a record breaking 17-1 record into the playoffs. However, their historic season came to an abrupt end. The Panthers lost their first round game despite the contest being a home game. This year, the entire Panther roster had redemption on their mind. The Panthers finished 16-2, one less win than the year before, but this team had a completely new mindset.

The Buford Wolves traveled to the Mill for the first round of the Georgia High School Association State Playoffs. They had been floating around .500 for most of the season, but won five of their last seven games coming into the postseason matchup. Grant Breyo, who made first team all-state, led the Wolves into Panther Stadium.

“[Buford] is a very good team,” head coach Jeff Schmidlkofer said. “They have a lot of weapons, but so do we.”

One of the biggest weapons for the Panthers is senior Evan Torres. After an excellent junior season, Torres was disappointed with the team’s result. His response included four goals to help the Panthers take down Buford 16-11 and avenge last year’s first round exit. Juniors Ethan Sack and Ryan Cockes each tacked on three of their own goals as well in the win.

“We’ve been struggling to get past the first round,” Torres said. “It’s great to have another game, especially at home.”

Breyo responded with his first of four total goals to put the Wolves on the board with 9:48 left in the first quarter. Four minutes later, Gavin Kesselring launched a shot that tied the game at 2-2. With 3:26 left until the second quarter, Max Whalen gave Buford a 3-2 lead. However, Cockes answered 23 seconds later, and the game was knotted at 3-3. Torres and Breyo traded goals, but with just one second left in the quarter, junior Panther Avery Jenks put Starr’s Mill up one going into the second quarter.

“Our guys have confidence, and that’s huge,” Schmidlkofer said. “Sometimes confidence is the hardest thing to beat.”

After scoring to end the first quarter, Jenks opened the second quarter with an assist on a goal scored by junior Joey DeLuca. The Panthers held their two-goal lead for the next six minutes, until Gavin scored again. The Wolves brought the game within one goal, but still had no answer for Torres, who scored his third goal just moments after Buford’s score. A two point advantage didn’t satisfy the Panthers, as Cockes and Torres each scored to put the Panthers up 9-5 with 2:30 left in the first half.

Breyo earned his hat trick as the first half came to a close, but the Wolves till trailed by three goals. The Panthers were one step faster than Buford, who couldn’t keep up with the quick ball movement of the Starr’s Mill offense.

The third quarter saw a change of pace, as both teams slowed down on offense. Neither team saw many shot opportunities and both teams started to turn the ball over. Kesselring scored twice, but a Panther goal in between his two strikes kept the Wolves at bay. Buford trailed 10-8 entering the final quarter.

Peyton Kesselring’s early goal in the fourth quarter brought the Wolves within one. However, the Panthers then rattled off five straight goals, scored by five different players. With 3:48 left, Starr’s Mill led 15-9, and a Buford comeback didn’t seem likely. A couple late goals pushed the final score to 16-11, and the Panthers stormed the field in victory.

“We knew we had a bad playoff record and we had to come back this year,” Cockes said. “We did what we needed to get done.”

In the second round of the playoffs, the Panthers play annual lacrosse powerhouse, Lovett. The Lions bolster a 15-4 record, including a 10-0 record at home. However, Lovett isn’t the only team with undefeated home record, as the Panthers are also 10-0 on their home field. The deciding factor could be the Panthers home field advantage, but the game should be nothing short of excellent.

“I’m extremely proud of the guys, but we have to get back to work,” Schmidlkofer said. “Lovett is the pinnacle of high school lacrosse in the state of Georgia.”

The Lady Panthers also played on Tuesday, and after a visit to the final four a year ago, they are seeking a state championship. First up was Pinecrest. The Paladins were riding a three game losing streak coming into the match. The Lady Panthers had no intentions of losing their perfect record, and it showed during their 15-7 win over Pinecrest.

The Westminster Wildcats are next in line to visit Starr’s Mill. After a 12-6 regular season that concluded with a 20-0 shellacking of Mount Paran Christian, the Wildcats pounded Woodward academy 22-2 in their first round contest. Both teams look to continue their trip to the final four.

Both Panther lacrosse teams will play on May 6 at  Panther Stadium. Starr’s Mill lacrosse is a combined 19-0 at home this year. The boys start against the Lovett Lions at 2 p.m., and the girls follow against Westminster at 5:30 p.m.