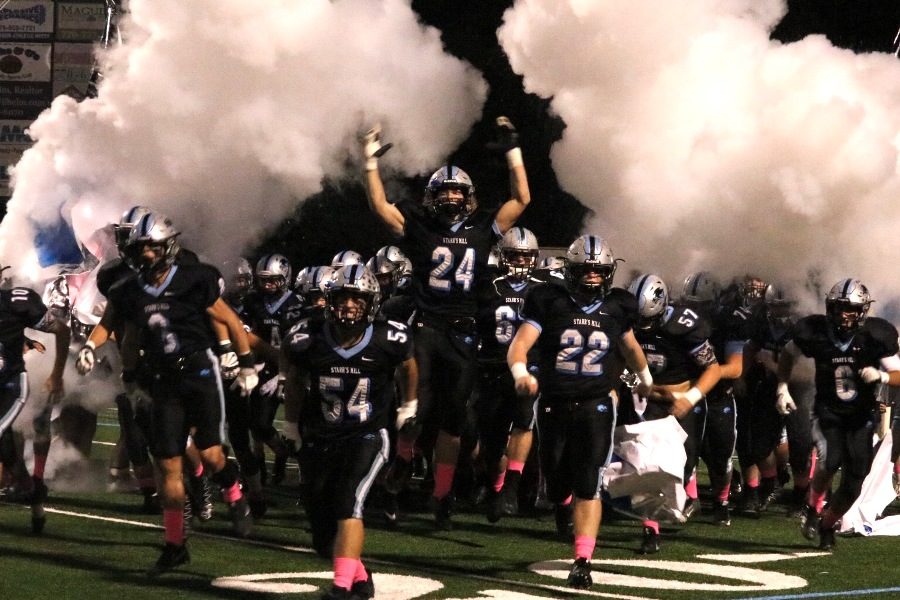 The Panthers run through the team banner before their game against Fayette County. After their 44-13 victory over the Tigers, Starr’s Mill won their second consecutive region championship.

Last Friday’s game was all about the huge senior class on the Starr’s Mill football team, a class that made history with a 44-13 win over Fayette County. The seniors on the roster are the second class of players to make the state playoffs in all four years at the Mill, but also became the first players in Starr’s Mill history to lead the Panthers to back-to-back region titles.

“When you talk about history and the legacy of the program, these guys raised the bar a little bit,” head coach Chad Phillips said.

The Panthers topped their season average of 323 rushing yards per game with 390 against the Tigers. Senior running back Cole Gilley led the Panthers in rushing attempts with 17, and picked up 71 yards and a touchdown, but senior running back Mitch Prowant totaled 115 yards and two touchdowns on just five touches. Senior quarterback Joey DeLuca completed two of his six passes for 42 yards, and also ran for 78 yards and two touchdowns.

As for Fayette County, they struggled against a defense that only allows 19.4 points per game and has 19 turnovers to their name. The Tigers only gained 237 total yards and saw sloppy play from their backfield, all while failing to qualify for the state playoffs. With an almost non-existent rushing game, most of the Tiger offense came from sophomore quarterback Jekobe Coleman, who threw for 132 yards and a touchdown on 6 for 10 passing.

“We got off to a slow start, but we came alive and played well,” Phillips said. “We threw a lot of challenges out at [the players] and they answered the call.”

The senior captains for Starr’s Mill, Gilley, DeLuca, Nick Brown, and Austin Schriver, began the game by electing to receive the opening kickoff after winning the coin toss. The Panthers usually choose to receive the opening kickoff to get a headstart on their opponents, but failed to do so against Fayette County, opening with a three-and-out. However, the Tigers immediately responded with a 71-yard touchdown pass on their first offensive snap. The Panthers blocked the extra point to keep the score at 6-0 before their offense returned to the field.

Unlike the Tigers’ quick score, the Panthers used the next six minutes on a lengthy drive down the field. DeLuca led the offense 65 yards in 13 plays, and finished off the series with a quarterback sneak from the goal line to put Starr’s Mill on the scoreboard. Junior kicker Michael Lantz drilled the extra point through the uprights, and the Panthers led 7-6 with 3:42 left in the first.

“Throughout the season, [the offensive line] just gets better and better,” Prowant said. “You have to tip your hat to them.”

The Tigers answered Starr’s Mill with an extended drive of their own. Despite starting 80 yards away from the endzone, Fayette County navigated their way to six points over the span of 12 plays, including a 50-yard completion from Coleman to senior running back Corey Andrews. Andrews then scored on a 1-yard touchdown run to finish the drive, but the Tigers converted the extra point this time for a 13-7 lead.

Starr’s Mill took over at the 10:22 mark in the second quarter, and made sure that they didn’t trail Fayette County for very long. The drive began with a 36-yard completion from DeLuca to Prowant, then DeLuca scrambled 23-yards for his second rushing touchdown of the night. After just 21 seconds trickled off of the clock, the Panthers reclaimed the lead, 14-13. 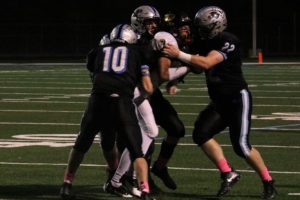 Shelby Foster Three Panthers bring down a Fayette County player. The Panther defense gave up 145 total yards in the first quarter, but only allowed 92 yards the rest of the game.

The Tigers offense suddenly stalled and ended the first half with three straight punts. Meanwhile, Starr’s Mill padded their lead with touchdowns from Prowant and sophomore running back Kalen Sims, as well as a field goal from Lantz. The Panthers offensive surge combined with their defensive prowess propelled them to a 31-13 lead at halftime.

“We started slow on offense, and our defense made some dumb plays,” senior linebacker Ryan Cockes said. “About halfway through the first quarter we clicked as a team, and everything across the board, we did well.”

Fayette County opened the second half with their fourth consecutive punt on a quick three-and-out. Brown received two handoffs on the first two plays of the next drive, breaking off the second run for a 50-yard gain. Two plays later, Prowant scored on a 6-yard touchdown run, but Lantz’s PAT was blocked, giving the Panthers a 37-13 advantage.

The next Fayette County drive ended swiftly with another punt, and the Tigers were running out of time to make a comeback. Following the punt, the Panthers’ streak of six straight scoring drives ended with a turnover-on-downs, but the Fayette County offense produced the same result on the next series. Gilley then put the final points on the board with a 1-yard touchdown run that ended a 5-play, 38-yard drive from Starr’s Mill. Both teams brought their backups in and the game concluded with a 44-13 score.

“Goal number one was winning the region, and goal number two was returning to the state playoffs,” Phillips said.

Starr’s Mill may have defeated Fayette County, but they needed more than that to capture a region title. Mainly, they needed Whitewater to beat McIntosh, or Griffin to lose their game. Whitewater defeated McIntosh 59-34, while Griffin enjoyed a 41-0 thwarting of Riverdale. With these results, Starr’s Mill earned the first seed in the region, followed by Whitewater, Griffin, and McIntosh.

Starr’s Mill will host Dutchtown in the first round of the state playoffs. Two years ago, the Bulldogs appeared on the Panthers’ schedule twice, falling to the Mill both times. Early in the regular season, Starr’s Mill squeezed by Dutchtown 31-29, then later crushed the Bulldogs 45-7. This year, Dutchtown boasts a 7-3 record, with all three of their losses coming against region opponents. The playoff contest in Panther Stadium kicks off at 7:30 p.m. on Nov. 10.