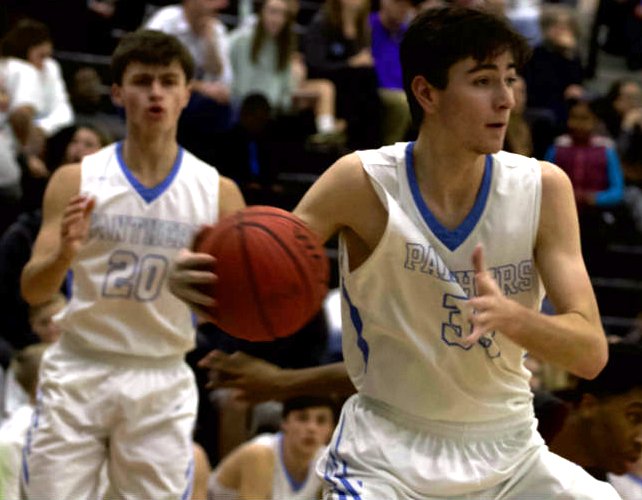 A Panther player grabs a rebound during a game earlier this season. The Panthers’ most recent win over Riverdale set many school records for the basketball program.

Tuesday night’s victory over Riverdale may come across as just another game on the boys’ basketball schedule. However, history was made, and records were broken for Starr’s Mill.

Senior forward Drew Hudson scored 26 points in the Panthers’ 54-38 win, breaking the career points record for boys basketball at the Mill. The win was the Panthers eighth in a row, which broke the school record for the longest win streak. The victory also marked the highest win total in school history for the boys.

“We knew [Drew] was special his sophomore year. Then his junior year was a great year,” head basketball coach Brandon Hutchins said. “With his work ethic, and [how much] he wants to win, we knew it would carry over to his senior year.”

This year, Hudson is averaging 18 points and 11 rebounds per game, leading the Panthers in both categories. His performance against Riverdale landed him at 916 career points, four points ahead of the previous leader Zach Pina. With multiple games still ahead, it’s possible that Hudson could be the first boys player at Starr’s Mill to surpass 1,000 points.

The most impressive part of the Panthers’ 16 wins this year is that eight have come in a row. The Panthers started 1-2 in the region, suffering losses to McIntosh and Morrow. As they grew healthier and gelled as a unit, they went on a tear, winning eight straight region games and soaring to the top of the region. However, they still look to build on their already historic season.

Their final regular season game is on Feb. 2  against Griffin. The Panthers defeated the Bears 66-52 in their first meeting earlier this year. Following this game, the Panthers will compete in the region tournament next week at Riverdale. If Starr’s Mill wins the tournament, it would mark the first time they have ever done so, adding on to what is already one of the best years of basketball at the Mill.