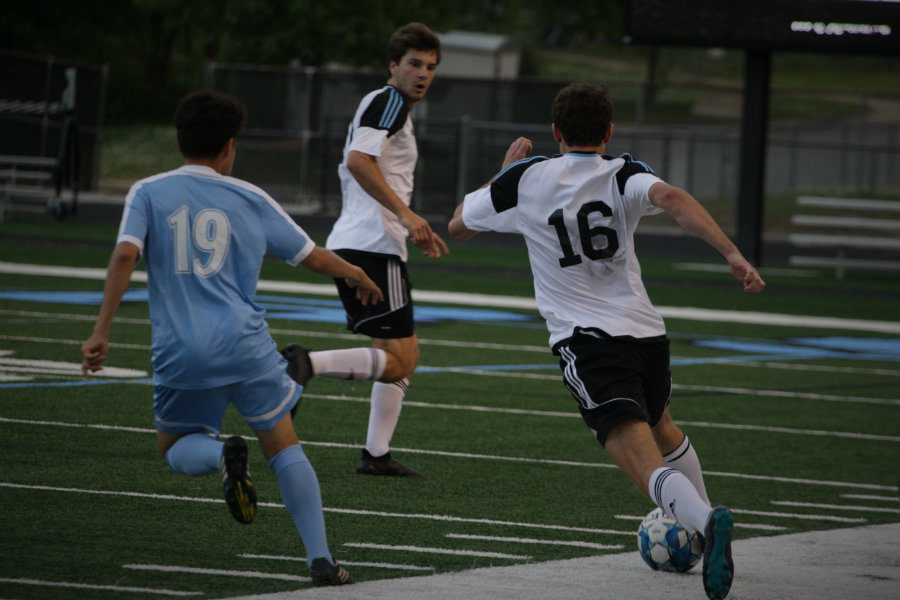 Starr’s Mill player prepares to pass the ball to another Panther, preventing a Knight from intersecting the ball. The Panthers lost the final four game against the Johnson Knights 4-1, ending their season.

Last week, the boys’ soccer team hosted the Johnson Knights in the Elite 8 of the AAAAA GHSA state playoffs.

This extremely aggressive, high stakes game resulted in a 4-1 loss for the Panthers and an end to their season.

Senior Sam Pompeo scored the lone goal for the Panthers during the last six minutes of the second half. The Knights, on the other hand, scored a total of four times, once during the first half and three more times during the second half. Starr’s Mill’s keeper freshman Andrew Cole blocked over 12 attempted goals from the opposing team.

“I told them after the game, that it’s disappointing to lose, but they exceeded all expectations [by] going this far,” head coach Mike Hanie said.

The stakes of this game were high as seen through the immediate aggression shown by players on both sides of the pitch. There was a large amount of pushing and shoving occurring during the first half as both teams attempted to get their feet on the ball. The Knights made their first goal of the night, and only goal in the first half, 18 minutes into the first half.

With less than 20 minutes left in the first half, Cole blocked two goal attempts in a row, taking one ball to the stomach and jumping to hit the second out of the air. The first half ended with the score at 1-0 in favor of the Knights.

“I went out there and was really hoping to win,” Cole said. “I thought we could beat them. We were doing pretty well in the tournament, and we had a good mindset. We were positive, but they were just a better team than us.”

The Panthers kept the same lineup to start the second half. Even though the first half was plenty aggressive, desperation on both sides of the field to make it to the state championship game fueled further aggression as seen through multiple yellow cards. As the game continued, however, the intensity of the Knights increased, while the Panther momentum wavered.

After sixteen minutes of failed goal attempts and back and forth between the two teams, the Knights scored their second goal of the night.

Twelve minutes left in the game, the Knights scored again as Cole was only able to block the first of two consecutive goal attempts.

The bright spot of the match came when the Panthers managed to score one goal with six minutes remaining.

The Knights scored their final goal with less than three minutes remaining. Starr’s Mill defense was simply no match for the opposing team’s strong offense resulting in a 4-1 loss for the Panthers.

“This season was awesome,” Pompeo said. “The players and coaches made it super fun to be a part of, [it] couldn’t have had a better group of people to spend my time with.”

The Panthers ended their season with a record of 15-9 overall and 6-1 in the region.

Johnson moved on to play the McIntosh Chiefs in the AAAAA GHSA State Championship at Mercer University.  The Knights defeated the Chiefs 1-0 to capture the state title.