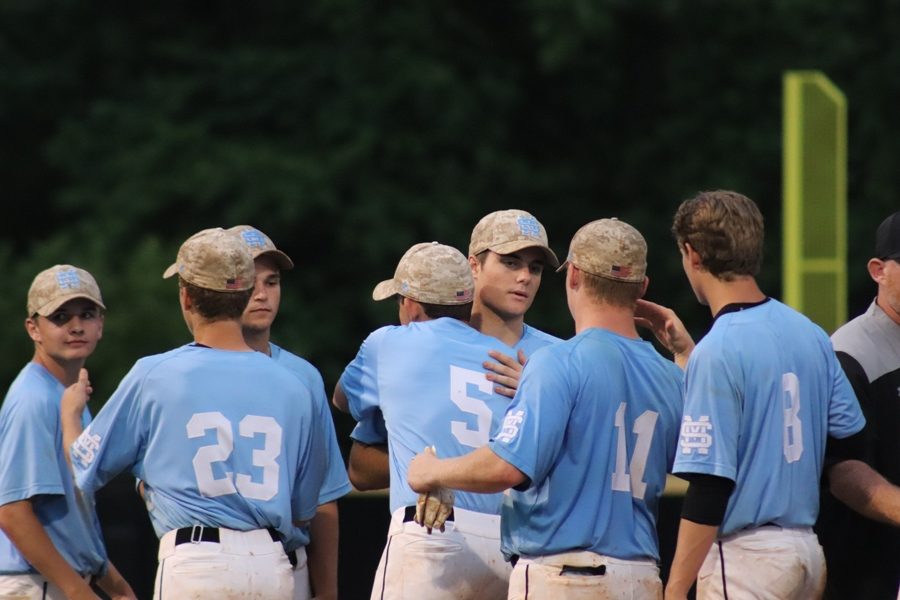 Seniors on the team embrace after the series ended. Although the Panthers played strong defense throughout the series, Loganville’s talent on both sides of the ball was too much.

The first game of the GHSA AAAAA state playoff semifinals was held on May 15 at Starr’s Mill High School. The Mill was scheduled to face fellow No. 1 seed and reigning state champion Loganville Red Devils in a best of three series.

In two hard fought games that saw outstanding pitching and defense from the Red Devils, the Panthers’ season came to an end despite the best efforts of multiple seniors on the team.

Starting on the mound for Starr’s Mill in game one was senior Hayes Heinecke. Coming off of a couple of solid postseason performances, the Panthers were confident heading into the series.

“It is always nice to have any of our starting pitchers on the mound in the playoffs,” senior catcher Charlie Mizzell said. “We have a couple of guys who can dominate any game they throw in.”

In the first at bat of the series, the Loganville offense gave a preview of their talent as the lead off batter hit a home run on just the second pitch he saw. Although Heinecke would give up a walk later in the inning, the Panthers were able to make quick work of the remaining four batters including two strikeouts and a pick off after a runner attempted to steal second base.

The Panthers failed to take advantage of their first inning at the plate, as they would go three up, three down and also allow the Red Devils to record two strikeouts of their own.

Immediately following the first inning, the game was delayed for a little over an hour after the rain had become too much for the game to continue. At just after 3:45 p.m., the game resumed in the top of the second.

The second inning saw Heinecke dominate as he forced the visiting team into three straight strikeouts. Starr’s Mill’s bats began to show some life in the bottom of the inning, as after a groundout by Heinecke, senior Nathan Price reached first on a ground ball. On the next at bat, senior Mitchell Sutton hit a triple to left field before Price would be thrown out at home plate. The inning ended after another ground out and the score remained 1-0 while the Panthers left a runner on third.

The Red Devils started the third inning with two runners on base following a dead ball as well as a walk. In the next at bat, a fly ball that dropped in shallow right field loaded the bases with zero outs. A line drive to right field then sent one runner home but a solid defensive play prevented any further damage. With the bases loaded for the second time in the inning, Heinecke again came up big after a ground ball went right back to him and he first got the runner at home on the force out and then at first to end the half inning with a double play. Starr’s Mill hit another difficult trip to the plate as the Panthers began the inning with a walk but then were retired three straight times by excellent Loganville pitching.

Halfway through the first game and with Loganville up 2-0, the Panthers were able to come up with another strong defensive showing as after the first batter of the inning reached second on a hit to the right field gap, Heinecke recorded two more strikeouts and Mizzell threw out a steal attempt at second base. Mizzell also led off the lineup in the bottom of the fourth with a triple to deep center field, and he was driven in off of a perfect sacrifice fly by Heinecke. The inning would end just two batters later with the score now sitting at 2-1.

“I just did anything I could to help the team,” Mizzell said. “Hayes and I were both in a rhythm and we were able to make some important plays.”

Loganville was quickly taken care of by three straight strikeouts to add to the impressive outing from Heinecke, and in the bottom of the fifth, with runners on first and second and two outs, junior Brian Port was walked to load the bases for the Panthers’ number three hitter Mizzell. Unfortunately for the home team, Mizzell struck out, stranding all three base runners.

In the sixth inning, the Red Devils would strike again on the offensive end to gain a more comfortable lead. With two outs and a runner on second base, Starr’s Mill decided to intentionally walk the same batter who led the game off with a home run only to be punished by the next batter who hit a deep, three-run home run to center field to place the visiting team ahead 5-1. The Panthers came up to bat after a fly out that ended the half inning, but were retired in just three batters to send it to the final inning of game one.

A pitching change for Starr’s Mill to freshman Daniel Courtney got the job done as Loganville only placed one runner on base in their final trip to the plate. The Panthers were unable to gain any traction in their last chance to steal game one, recording three consecutive strikeouts to end the game 5-1 and put Loganville up 1-0 in the series.

“I think the pitching was really good as usual,” head coach Brent Moseley said. “It’s been our strong point all year.”

In what could be the final game of the season for the Panthers, Starr’s Mill led off the second game of the series up to bat. Placing runners on second and third following a walk and a successful bunt due to a throwing error by the Red Devils, the Panthers yet again struggled to take advantage of base runners when they were retired after a pick off at second and two strikeouts. The Mill chose senior pitcher Dawson Sweatt take the mound in this win or go home game. In an excellent first half inning, Sweatt gave up just one single while closing out the side in only four batters.

The Mill’s bats went cold again in the top of the second, going three, up three down including two ground outs. After recording two straight outs to begin their turn at the plate, the Red Devils’ continued their momentum from game one and quickly placed two runners on second and third due to two outfield hits and a double steal. A passed ball allowed the first run of the game to cross the plate, and a ground out ended the inning with Loganville in the lead 1-0.

In the third inning, Starr’s Mill recorded one hit while striking out three more times. The Red Devils started the half inning at the plate with a walk and an infield hit to place runners on first and second. After one runner stole third, a grounder that rolled past the shortstop into left field drove in one run while placing runners on first and second base. Three at bats later, Loganville scored another run on a passed ball to expand their lead to 3-0.

Mizzell led the Panthers off in the top of the fourth inning with a single, and a passed ball in the next at bat allowed the Starr’s Mill runner to advance to second base with no outs. Following two straight strikeouts, Sutton hit a grounder into left field that placed the Panthers on first and third. Unfortunately for Starr’s Mill, the inning would end abruptly after a pick off gave Loganville their third out. The Mill made quick work of the Red Devils in the bottom of the inning, earning two fly outs and a bunt out in only three batters.

“I think hitting with runners in scoring position really hurt us,” Moseley said. “We struck out way too many times.”

The fourth inning was a defensive battle for both teams. First the Red Devils ended the Panthers hopes of mounting any momentum on offense as they were retired in three short at bats, and then Loganville’s opportunity to expand their lead was squandered in only four batters.

Freshman Thad Ector led off for the Panthers in the fifth inning. After a ground out to start things off, Port reached first due to a poor throw on a routine ground ball. A Mizzell hit to center field then placed Starr’s Mill runners on first and second base. A strikeout in the next at bat was followed by a deep fly ball from Price that hit off of the top of the fence but stayed in the field of play. The hit drove in two runs but the Panthers were unable to tie the game after a line out left two runners stranded on base.

Loganville would not take long to increase their lead again, and with two runners on base and only one out, a double to left field drove in two runs. The next at bat, a hit up the left field line, drove in the third and final run of the inning.

In the top of the seventh, the Panthers entire season was on the line and Starr’s Mill needed to put five runs on the board in order to go into extra innings. The Loganville pitching continued their dominance and after a leadoff walk, retired three straight batters to send the Panthers home with a 7-2 loss.

The Panthers ended their season with a 25-12 overall record and a 16-1 region record. Starr’s Mill will lose seven seniors this offseason including two key pitchers.

“The seniors showed great leadership and taught the younger guys how to win,” Moseley said.

With an abundance of young talent and another strong senior class for 2019, Moseley expects to remain one of the top teams in the state.