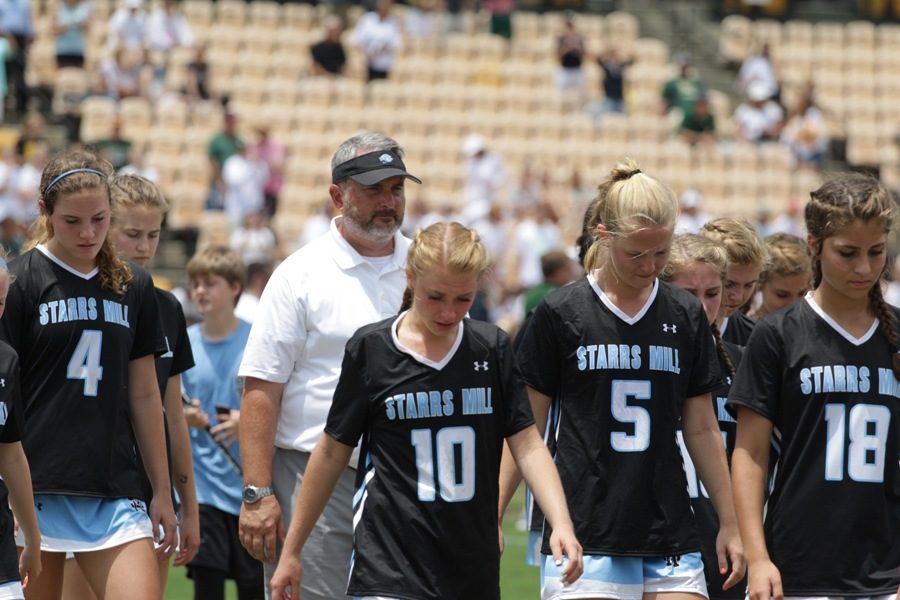 The Lady Panthers walk off the field following their 15-7 loss to Blessed Trinity. The Lady Titans won their third straight state championship by beating Starr’s Mill, who was playing in their first ever championship game.

“Blessed Trinity was definitely very fundamentally sound and experienced,” senior Alexis Coullias said. “But our girls will take that experience with them in upcoming years.”

Coullias and sophomore Ryanne King each scored two goals for Starr’s Mill, while senior Caroline Broderick, senior Elizabeth Holley, and sophomore Jordyn Richards combined for the other three goals. The Lady Panthers fell into a big deficit in the first half and, despite playing much better in the second half, could not catch up to Blessed Trinity.

Senior Elise Hammelrath, junior Kayley Attaway, and sophomore Kelly Scott led the Lady Titans in their win over Starr’s Mill. Hammelrath launched four shots past the Starr’s Mill goalie, while Attaway and Scott each added three goals of their own. Junior goalie Ansley Biggs held the high-scoring Panther offense to just two goals in the first half.

“I just don’t think we came out with the kind of intensity we needed to be competitive early,” King said.

After winning the opening draw, it took less than a minute for Blessed Trinity to score. Junior Lizzy Murphy cut down the middle of the Panther defense and fired a shot into the net. Two minutes later, Broderick responded with a goal of her own to even the score at 1-1.

From 17:29 to 9:25 in the first half, The Lady Titans went on an 8-0 run to gain a 9-1 lead on Starr’s Mill. Hammelrath scored three of the eight as Blessed Trinity built a big lead early in the game.  Over the last nine minutes, Holley added one goal for the Lady Panthers to make the score 9-2 going into halftime.

Similar to the first half, Murphy opened the second half with a goal for the Titans. Less than a minute later, Blessed Trinity won the draw and immediately scored another goal. This time it was Hemmelrath scoring, her fourth goal of the game. Now trailing 11-2, the Lady Panthers desperately needed a goal. King answered the call with her first goal of the game at the 22:28 mark in the second half.

An Attaway goal was sandwiched by two Starr’s Mill goals from Coullias and Richards, and with 16 minutes left the score was 12-5. Scott scored again to put the Lady Titans up eight, then Coullias and King trimmed the deficit to six.

Trailing 13-7 with 14 minutes left, Starr’s Mill lost all momentum. Despite having multiple opportunities to score, the Lady Panthers missed shots and turned the ball over. Blessed Trinity scored twice more in the final minute of the game, and clinched their three-peat as state championships.

“[In the second half], our focus improved,” King said. “We started executing our game plan better.”

Even though they came up short of a state championship, this year’s Lady Panther lacrosse team that will only lose four seniors to graduation is one to remember. From outscoring their opponents 327-99, to a second consecutive area championship, to the first state championship in school history, this season was nothing short of remarkable.