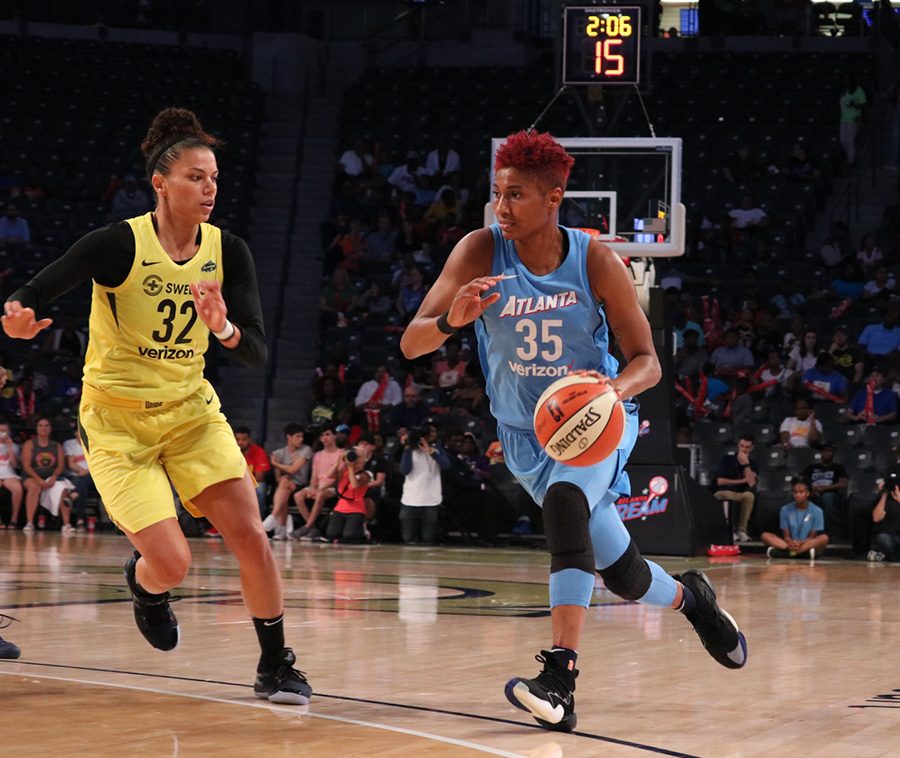 After winning their previous game against the Indiana Fever on July 1, the Atlanta Dream came into Friday night’s matchup against the Seattle Storm with a season record of 8-8 and looking to stay above .500 on the season. However, the Dream failed to do so despite a valiant effort in the second half, falling to the Storm 95-86.

“We want to be on the top by the end of the month,” forward Angel McCoughtry said. “We’ve been on the road so much in June, and now we have a long home stretch, so we’ve got to win these games at home.”

McCoughtry scored a team-high 26 points and grabbed four rebounds for the Dream. Guard Tiffany Hayes added 23 points and connected on three 3-point jumpshots in her third game back from a right ankle injury.

For the Storm, forward Breanna Stewart showed why she leads the league in points per game, scoring a game-high 29 points and snagging nine rebounds. Veteran guard Sue Bird chipped in with a double-double, scoring 18 points and dishing out ten assists.

The game started well for the Dream as they drove to the hoop for easy points in the paint and allowing a  9-2 run. They started strong on defense as well, contesting each shot and crashing the boards for defensive rebounds.

Momentum took a turn midway through the first quarter when the Dream committed three turnovers in a row. The Storm capitalized on the Dream’s mistakes and went on a 9-0 run. Dream guard Brittney Sykes ended the scoring drought with a three point jumpshot with two minutes left in the quarter. Seattle went on another small run to end the first quarter, with a jumper from Stewart and a three-pointer by Kaleena Mosqueda-Lewis. At the end of the period, the Storm led the Dream 23-16.

“I thought we executed well on our first three or four possessions,” head coach Nicki Collen said. “Then I thought we were a bit of a trainwreck, especially in the second quarter.”

The Dream did not perform well at all in the second quarter. The Storm opened the quarter with a 5-0 run, increasing their lead to 12 points. Atlanta countered with a run of their own, scoring nine points while holding Seattle to only two points over the next two minutes.

After this small run, Stewart and the Storm unleashed an offensive barrage on the Dream. Seattle totaled 21 points, Stewart scoring nine of those, while the Dream only scored nine as a team in the last six minutes of the second quarter. The half ended with Atlanta in a 19-point deficit, trailing the Storm 53-34. The stat of the first half was the Storm shooting 61% from the field compared to the Dream’s 33%.

“We splintered in the second quarter,” Collen said. “That’s not the team I want [us] to be. I challenged them not to be that team, and I think they were prepared to do so in the second half.”

The Dream and the Storm started the third quarter by trading baskets. Seattle’s lead stayed around 19 points for the first three minutes of the second half. At the seven minute mark, Atlanta began to hit their stride on offense, slowly chipping away at the Storm’s lead. The tandem of Hayes and McCoughtry led the Dream’s offense, scoring 11 and 14 points, respectively. A Sykes layup cut the lead down to six points with eight seconds remaining, but a three pointer by Mosqueda-Lewis at the end of the quarter gave the Storm a 72-63 lead over the Dream.

The fourth quarter started off similar to the third, with both teams going back and forth with each other during the first four minutes. However, Seattle’s lead jumped back up to 15 points after a jumpshot by Bird and a three pointer by Stewart. The Dream managed to come back within seven points with less than one minute left, but it was too little too late. Two free throws from Bird and guard Jewell Loyd, respectively, iced the game and gave the Storm a 95-86 victory.

“[The Storm] are very composed under pressure,” McCoughtry said. “Every time we gave a dagger they gave a dagger right back, and that’s the mark of a great team.”

The Storm shot 51% from the field on the night as Stewart demonstrated why she’s the league’s top scorer with help from Bird who leads the league in assists per game.

With the loss, the Dream’s overall record moves to 8-9, one game below .500. The Dream play again on July 8 at McCamish Pavilion against the Phoenix Mercury, who are tied with the Seattle Storm for the best record in the league at 14-5.