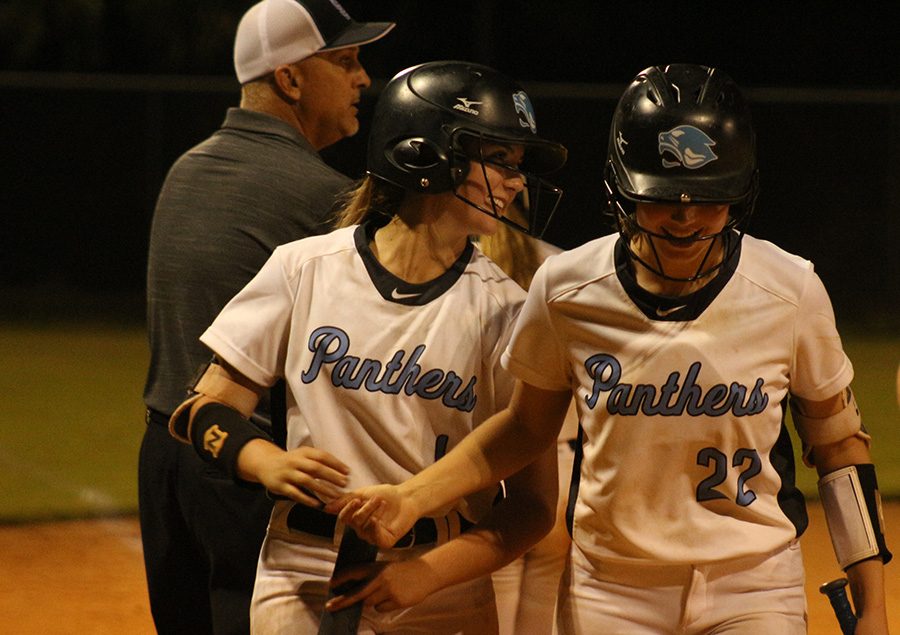 Junior first baseman Paige Andrews and freshman pitcher Lilli Backes walk off the field together smiling. After defeating McIntosh, the Lady Panthers hold the No. 1 seed in region 3-AAAAA with a 16-1 overall record and 8-0 in the region. Starr’s Mill has only allowed one run in region play this season.

On Tuesday, the Mill defeated McIntosh for the second time this season 3-0 in a game that relied on performances from two stellar pitchers.

“[Freshman Lilli Backes] has stepped up all year, I thought she was a little tired there,” head coach Mark Williamson said. “Lilli said she was good and I trust her to tell me the truth.”

For the Lady Panthers, Backes pitched six strikeouts total, while battling sophomore pitcher Rebecca Muh who had 11 strikeouts overall. Backes also contributed one of the two RBIs for the game hitting in junior Jolie Lester. Lester added an RBI of her own. The last run was scored by sophomore Lauren Flanders.

“I just know that I have good defense behind me,” Backes said. “And that I can be a little more lenient and they will have my back.”

The top of the first inning went by quickly with only four batters stepping up to the plate. However, the bottom of the inning changed the pace of the game. Flanders led off with a hit into the outfield. After she made it to second base, the ball was overthrown, allowing her to advance to third where the ball was overthrown once again sending Flanders home for the first run of the game.

Lester was walked to first, and while Backes was at the plate, Lester stole second base. Backes then hit a double that sent Lester home, scoring the second run for the team. Despite Panther offensive advances, Muh managed to throw two strikeouts this inning.

“As soon as you see it on the ground, just take a shot,” Flanders said. “I had some time to run a little bit.”

In the second inning, only one player managed to make it onto a base. Sophomore Ashlyn Gaines hit a single for the Lady Chiefs in the top of the inning. In the bottom of the inning, Muh pitched two strikeouts while the third out came from a fast throw to first base.

The third inning followed the same tempo with junior Chief Brooke Burnette being the only player to make it on base. In the bottom of the inning, Muh once again threw two strikeouts to send the game to the fourth inning.

After two short innings, Gaines hit a double into the outfield, but was quickly followed by two outs to end the top of the 4th. In the bottom of the inning, the Lady Panthers had two runners on base. Lester stole third base, and senior Wakana Sato stole second while senior Alyssa Angelo was at bat. The last out was a quick throw to first base getting Angelo out while Lester and Sato run for home.

“We preach quality at bats. Sydney probably had 0-2 and then saw five more pitches. That’s a quality at bat,” Williamson said. “That makes the pitcher throw probably 150 or 180 pitches tonight.”

The top of the fifth seemed to follow the pattern set by the rest of the game where batters struggled to get on base. However, in the bottom of the inning, Lester batted freshman Sydney Blair home on a single that sent Flanders to third base. Lester stole second base while Backes was up to the plate. Then Backes hit a pop fly that was caught in the outfield to end the inning. The energy was killed in the sixth inning, which consisted of six batters up and six batters down. The inning ended with Muh throwing her eighth and ninth strikeouts of the game.

At the end of the game, McIntosh was attempting to wear down Backes and make her throw as many pitches as possible. In the top of the seventh, the pressure was put on the defense to make fast plays. That call was answered with one strikeout, one fast throw to second base, and the last out was a diving catch at the edge of the infield by Flanders.

“I know I have a lot of good players behind me,” Flanders said. “So I know I can take chances like that.”

Currently, the Mill has only given up one run in region play and sits as the No. 1 seed in region 3-AAAAA. The Lady Panthers are 16-1 overall and 8-0 in the region. McIntosh now holds the  No. 3 seed with an overall record of 6-12 and 5-4 in the region.

Today’s game at Jonesboro was canceled.  The Lady Panthers travel this weekend to play in the Morgan County Invitational on Sept. 14 and 15 before hosting Whitewater on Sept. 18. A win against the Wildcats would all but seal the regular season region title for the Lady Panthers.