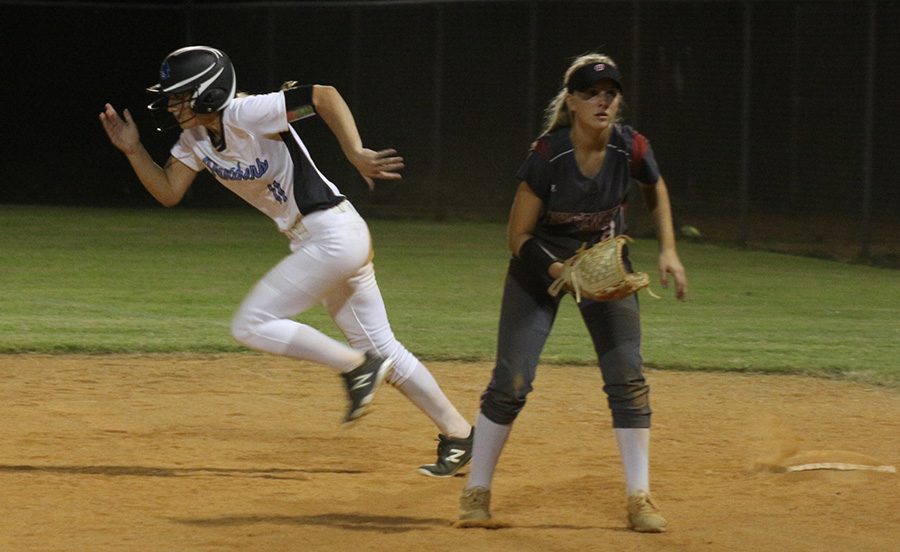 Freshman Sidney Blair runs to second against Whitewater. Starr’s Mill continued their region dominance against the Wildcats, defeating them 7-3.

After winning four of their five games at the Morgan County Tournament this past weekend, the Starr’s Mill softball team returned home for a region match up with Whitewater. The Lady Panthers defeated the Lady Wildcats 8-0 earlier this year, and replicated that dominance in their second meeting. After putting up runs early, Whitewater was unable to slow down the Panther offense, and fell to the Mill 7-3.

“We’re getting good pitching and timely hitting,” head coach Mark Williamson said. “We got behind early but a little adversity doesn’t scare this group.”

Sophomore Lauren Flanders was 4-4 against Whitewater, while totaling four stolen bases and two runs scored. Freshman pitcher and first baseman Lilli Backes reeled in two RBIs and also struck out four of the nine batters she faced as a relief pitcher. The Lady Panthers gave up two runs in the first inning, but their dynamic offense responded and led them to a 4-run win.

Senior Bailey Vessell reached base twice against Starr’s Mill, scoring both times, while also recording one RBI. Sophomore Lily Griffith finished with two RBIs for the Wildcats, as they lost just their third game of the year. The Lady Panthers had only given up one run to region opponents prior to the game, but surrendered three to Whitewater. However, it wasn’t enough to hand the Mill their first region loss of the year.

“We’re all playing for each other and you can really tell out on the field,” Flanders said.

Freshman Kyye Ricks led off for Whitewater, facing junior pitcher Paige Andrews for the Mill. Ricks was patient and eventually drew a walk to open the game. Vessell followed and crushed a line drive to right field, scoring Ricks. Griffith followed and grounded out to second, but still scored Vessell. The Lady Panthers quickly found themselves in unfamiliar territory. However, Andrews settled down and retired two of the next three batters to end the inning.

Flanders batted first for the Mill and immediately smacked a single. Senior center fielder Lea Duben followed with a double, putting runners on second and third for the Lady Panthers. Senior catcher Kate Ashmore stepped to the plate and popped up to the pitcher, but a drop resulted in loaded bases. Sophomore Jolie Lester then hit a ground ball single up the middle, scoring Flanders and Duben while advancing Ashmore to third. Backes kept the momentum going with a single to right field, putting runners on the corners and scoring Ashmore. Senior Wakana Sato earned and RBI later in the inning on a sacrifice hit, and the Lady Panthers led 4-2 going into the second inning.

“Everyone behind me [in the lineup] was working hard, so it made it easy for me,” Flanders said. “We played with a lot of hustle.”

The Lady Wildcats opened the second inning with a single, but Andrews then forced three straight outs to close the side. After a pop out by junior Kendall Robinson, Flanders returned to the plate and hit another single. Flanders stole second, and later Duben hit another single, scoring Flanders again. Ashmore and Lester were both retired and the third inning began with Starr’s Mill in the driver’s seat.

Vessell opened the inning with a ground ball to third, but Lester missed on the throw to first and Vessell ended up at third base. Griffith then grounded out to the shortstop senior Alyssa Angelo, but still scored Vessell. Once again, Andrews refocused and erased the next three batters. Starr’s Mill was quickly shut down in the bottom of third, as they went three up, three down, to end the inning.

“We got behind early and I don’t think anyone panicked,” Williamson said. “We’re gonna battle no matter what the score is.”

Andrews made quick work of Whitewater in the top of the fourth, only facing four batters before striking out Ricks to end the frame. Flanders hit another single in her third at-bat, but was left stranded at third after a Duben strikeout ended the inning. In the fifth inning, Backes took over the pitching duties and Andrews moved to first base. Backes forced two pop outs from the Lady Wildcats before striking out sophomore Raeghan Byrom to retire the side.

Ashmore led off the the bottom of the fifth with a line-drive single, and Lester followed with a double to left field. Backes then stepped up to the plate and knocked a run on a groundout to put the Mill up 6-3. Andrews then laid down a sacrifice bunt and scored Lester to increase the lead to four. Two batters later, Angelo popped out to right field to end the inning.

Backes then struckout two of the three batters she faced in the sixth, and continued to prevent any rally from Whitewater. The Lady Panthers put some runners on base in the bottom of the inning, but failed to score. Backes then opened the seventh inning with a strikeout before retiring the next two batters to end the game.

“I’m hoping I can help the team on defense,” Backes said. “I just tried to give the defense balls that they could field.”

The 20-3 Lady Wildcats play Griffin next before finishing the regular season at home against Jonesboro. The only two region losses they have suffered were both at the hands of Starr’s Mill, and they will look to avenge those losses in the region tournament.

As for the Mill, they defeated Fayette County 17-0 on senior night last night and finish the regular season on the road at Riverdale on Sept. 24.