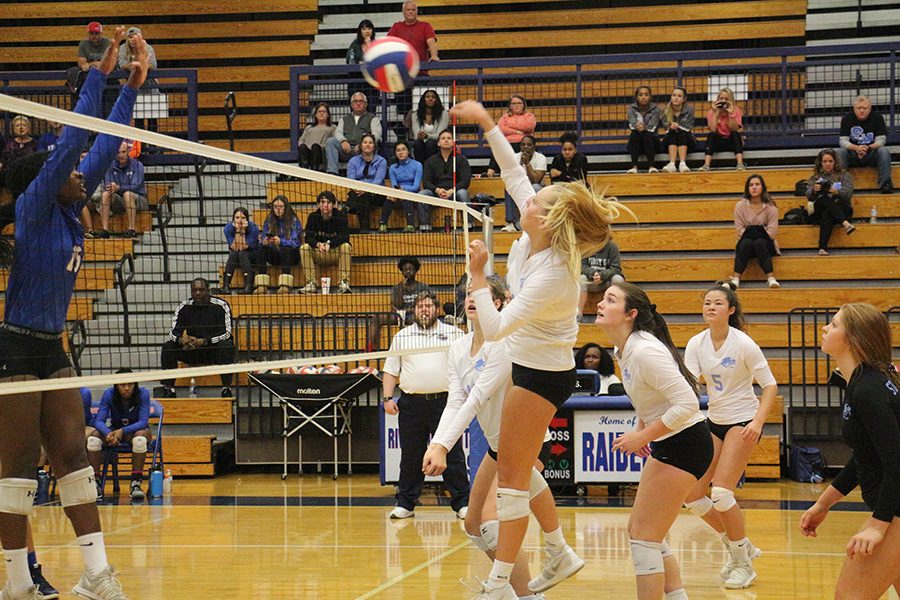 Senior Lilli Ryan spikes the ball. The team played amazingly in the big comeback victory over Riverwood, allowing the team to advance to the final four where they will face Whitewater in a region tournament rematch.

After an easy sweep of South Effingham and Harris County last week, the Starr’s Mill Lady Panther volleyball team traveled to Atlanta to take on the No. 1 seed from Region 6-AAAAA, the Riverwood High School Raiders, who previously defeated the Walnut Grove High School Warriors in three sets. Despite being down two sets to one, the Lady Panthers found a way to comeback with strong teamwork and great communication to ultimately win the match 3-2, giving Starr’s Mill their second straight final four appearance.

Game one started strong for the Panthers as freshman Nicole Smith scored the first two points off two spikes. Riverwood immediately started playing hard after that, scoring four straight points to take a quick 4-2 lead. Despite this, Smith and the rest of the team still managed to even the score. The team then caught up with Smith’s amazing play, as juniors Tessa Laney and Piper Dedrick were the rest of the main scorers as the Lady Panthers jumped to a 20-14 lead. Smith and Dedrick sealed the deal after that, giving the Lady Panthers a 25-19 game one victory.

Riverwood started out strong in game two, mainly due to junior Kaylah Jackson scoring half of the team’s points to take a quick 8-0 lead. The Panthers answered right back as senior Megan Lee scored five of Starr’s Mill’s eight points to tie it up.

Lee and Smith kept on pushing the Lady Panther offense to take a 15-8 lead. However, Riverwood kicked into overdrive and regained the lead shortly after. Then bad calls started piling up for the Lady Panthers, causing tension in both the players and coaches. Despite the calls, the Lady Panthers stayed in it and the game went into extra time. However, more bad calls took their toll, giving Riverwood a 29-27 victory to tie the match up at one apiece.

“I thought the calls were a little unnecessary,” Flowers said. “I did get a little heated, but I stayed calm and ultimately we got through that.”

The Panthers were feeling a bit of after-shock from game two, as game three got off to a quick 4-1 Riverwood start. However, Starr’s Mill got their heads back in the game and immediately went on a 5-0 run to take the lead 5-4.

While there were still bad calls in the game, the team just kept on playing, especially Laney, who scored half of the team’s next ten points and provided a clutch play to decrease the Riverwood lead to 21-18 late in the game. However, the Panthers lost game three in another close score of 25-23 to give Riverwood a 2-1 lead in the match.

“I kept on reminding the team that you can’t control the officials,” Flowers said. “Ultimately, our best was better than their best.”

Smith started off with strong play in game four, scoring the team’s first three points. This resulted in the team chanting ‘Just a freshman’ to encourage her strong play. The team then continued to play more aggressively than in the first three sets, which allowed them to not play catch-up early and keep their final four hopes alive.

Smith continued to keep Starr’s Mill close in the game, but Lee pulled off two clutch plays to tie and take the lead at 23-22. This continued clutch play from Lee earned her a ‘That’s our senior’ chant from her teammates. The Lady Panthers closed Riverwood out after that, giving the Panthers a 25-22 victory to tie match up at two apiece and avoid elimination.

The fifth and final game saw the biggest intensity from Starr’s Mill than any other set, as they took a commanding 7-2 lead due to the play from Smith, Lee, Laney, and junior Kayla Sloan, who missed rounds one and two last week due to injury. Riverwood came back behind the amazing play of Jackson and sophomore Sydney Levitan to regain the lead 9-8.

The game went back and forth after that until Kayla Sloan came in clutch to give the Panthers a 15-14 lead. Lee finished the game off with one last spike, giving the Panthers a 17-15 victory to win the match 3-2 and move on to the final four for the second straight year.

“We have to work on closing out matches earlier,” Flowers said. “All five of those sets were too close for comfort.”

Prior to this matchup, the Lady Panthers lost to the Lady Wildcats in two sets to drop Starr’s Mill to third in the region. The AAAAA semifinal match begins at 5:30 p.m. on Oct. 30. at Whitewater High School.

On the other side of the bracket, McIntosh hosts Buford, the No. 1 seed from Region 8-AAAAA, at 6 p.m. Tuesday night with a trip to the state championship on the line.  The Lady Chiefs and Lady Wolves met in last year’s state championship with McIntosh winning 3-2.