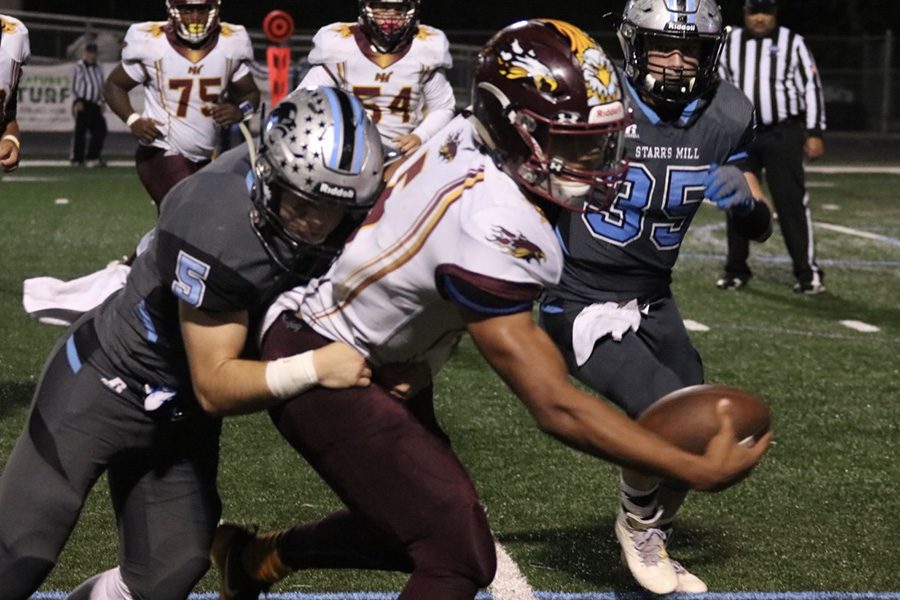 Senior quarterback Deyandre Ruffin reaches for a first down while being tackled by junior Panther Ardit Hoti. Ruffin totaled 190 total yards between the air and the ground, leading the Phoenix to an upset of Starr’s Mill 21-10.

Coming off of a third straight region championship and riding the momentum of a six-game winning streak, Starr’s Mill had high expectations for the postseason. However, their plans of a deep playoff run came to an abrupt end in the first round of the GHSA State Playoffs. New Hampstead made the trip to Panther Stadium and upset the Mill 21-10 to advance to the second round.

“We could never string together a good drive,” head coach Chad Phillips said. “We couldn’t get any momentum.”

The Panthers have relied on a dominant rushing attack all year, but the Phoenix held the home team to a total of 191 rushing yards. Junior quarterback Hunter Lawson led the Mill with 75 rushing yards and a touchdown on seven carries. Lawson also completed four of his 12 pass attempts for 77 yards and one interception. The Panthers’ leading rusher junior Kalen Sims injured his foot after totaling just four carries, and his absence drastically hurt the Starr’s Mill offense.

Senior quarterback Deyandre Ruffin displayed his skill on the ground and in the air with 81 rushing yards and 109 passing yards. Senior running back Dontre Wallace added 68 yards and a touchdown on 20 attempts. The Phoenix defense forced two crucial turnovers including a fumble recovery that was returned for a touchdown. These miscues from the Mill allowed New Hampstead to leave Fayetteville with an 11-point victory.

“The defense played well. [Ruffin] had a few big plays we could’ve stopped,” senior Sean King said. “Offense had some struggles and a few injured players.”

New Hampstead opened the game with possession but failed to take advantage. After turning over the ball on downs, the Phoenix defense took the field. Starr’s Mill immediately began to move the ball. On the second play of the drive, junior Ben Bodne broke off a 10-yard run through the heart of the defense, and four plays later Lawson scrambled for a 38-yard touchdown. Senior kicker Michael Lantz then put the Mill up 7-0 with 6:02 left in the first quarter.

The Phoenix responded with an interception seven plays into their next drive, but the Panthers failed to capitalize as they turned the ball back over. A fumble from the Mill was picked up and returned 62 yards for a touchdown that tied the game at 7-7. After three straight punts, New Hampstead had the ball again. They used an 11-play, 63-yard drive to score right before halftime. The score came on a 15-yard touchdown pass from Ruffin to junior receiver Sam Brown. The Phoenix led 14-7 going into the locker room.

The teams traded punts all throughout the second half until the 1:45 mark in the third quarter. Starr’s Mill had the ball and drove down the field. An 8-play, 68-yard series didn’t produce the seven points the Mill needed, but Lantz connected on 25-yard field goal that cut the deficit to 14-10. Once again, the defenses on both sides continued to force punts.

With two minutes left in the game, the Panthers had one last chance to take the lead. However, on the first play of the drive, Lawson threw an interception that led to a Phoenix touchdown three plays later. The turnover and score closed out the game, and New Hampstead handed the Mill their first loss in nearly two months.

“This year’s team was looked at as an underdog,” King said. “I’m so proud of the way we came back after the first four games and turned it around in the region.”

The Phoenix will move on to play Stockbridge, who defeated Veterans in the first round. The Tigers advanced following a 20-14 win and look to defeat New Hampstead and keep their playoff run going. Meanwhile, the Phoenix will ride the momentum from their first round upset into the matchup.

As for the Mill, the team will lose 15 seniors to graduation, but plenty of rising talent will return. Lawson and Sims will return to lead the Panther offense, and many other pieces, such as Bodne and junior Ardit Hoti, will return to the backfield. The defense, however, will have to deal with losing seniors Sean King, Michael Burnett, Jimmy Pecararo, Jalen Lazenby, and Sam White, all who started. They’ll look to sophomores Wes Haney and Cole Bishop to step up and lead the defense.

Next season, the players in the class of 2020 will look to be the first class in school history to win a region championship in all four years of their high school careers.