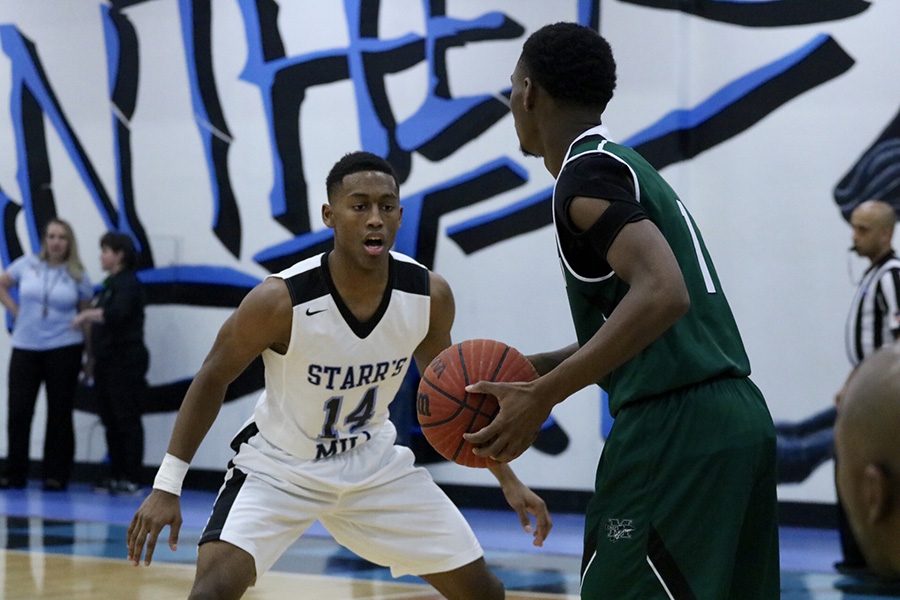 On Tuesday, the McIntosh Chiefs visited the Panther Pit for the storied Battle of the Bubble matchup. Both varsity games were close matchups, but the Panther squads pulled away in the second half of each game. The girls put on a defensive showcase and knocked off previously undefeated McIntosh 44-29, while the boys’ offensive firepower proved too much for the Chiefs, as the Mill won 69-49.

“I thought we came out a little slow in the first half,” head boys’ coach Charlemagne Gibbons said. “In the second half I was pleased. I thought we looked how we’re supposed to look.”

McIntosh hung in the game early, but the Panthers’ shooting and aggressive defense eventually overpowered the Lady Chiefs. McIntosh lost the ball to steals from the Mill eight times, and had three shots rejected. While they found open looks from outside, they couldn’t connect on any shots.

“I was happy with [my performance],” Hudson said. “In the third quarter I knew I needed to step it up.”

The Lady Panthers opened the game on a 6-0 run, but the Lady Chiefs bounced back quick. Neither team made many shots as both sides were looking to find a rhythm. The quarter ended with a 10-8 advantage for the Mill.

The second quarter showed much of the same, but the Lady Panthers managed to increase their lead. Hester scored five of the Panthers seven points in the period, and King stayed active on the glass on both ends of the court. The active defense of Starr’s Mill forced McIntosh to shoot, but the Lady Chiefs missed everything. After only allowing three points in the quarter, Starr’s Mill led 17-11 at halftime.

“I had a good defensive game and tried to be everywhere and get rebounds,” King said. “I tried to help my team on offense by setting picks.”

During halftime, the Lady Panthers made adjustments and entered the third quarter looking to separate themselves from their crosstown rival. They did just that, using a 15-2 run, fueled by eight points from Lally, to increase their lead to 32-13. Hudson finished with nine points in the quarter, and the Mill led 39-19 going into the final period.

Starr’s Mill slowed down during the final eight minutes, allowing McIntosh to outscore them 10-5 in the last quarter. However, the damage had been done and Starr’s Mill handed the Lady Chiefs their first loss of the year, 44-29.

“We’d been struggling with [shooting],” head girls’ coach Emily Sweeney said. “So for it to finally start clicking, it was nice to watch.”

Next up was the boys, who last played McIntosh a season ago in the region championship game. Like that game, Starr’s Mill was able to pull out a victory. Senior Nate Allison totaled 20 points and 11 rebounds, and junior Jamaine Mann added another 18 points and eight rebounds.

Going head-to-head with that Panther duo was senior Bruce Carpenter, who led the Chiefs with 22 points, five rebounds, and five steals. Senior Naj Ashley-Emory also added 11 points for McIntosh. The Chiefs kept the game close throughout the first half, but couldn’t keep up with the Mill in the second half.

The second quarter saw much of the same, as Carpenter battled Allison and senior Julian Lynch. Allison scored another six points, and Lynch added another five as the two scored 11 of the team’s 14 points in the quarter. McIntosh put up another 13, and the score was 28-28 at halftime.

“It starts with the first quarter,” Mann said. “You have to come out fast and strong, and it sets the tone for the rest of the game.”

Starr’s Mill used the third quarter to finally gain a decent lead. Led by Mann, who scored eight points in the quarter, the Panthers offense got rolling while the defense made crucial stops. Carpenter did his best to keep McIntosh in the game, resulting in a 44-39 score in favor of the Mill at the end of the period.

Mann scored another five in the fourth quarter, and sophomore Brandon Allison made two clutch shots that sparked a Panther run. The Mill’s defense, however, is what caused their separation from the Chiefs. They forced McIntosh to take bad shots and Mann, Nate Allison, and junior Reese Clevinger cleaned up the glass. The Panthers ended up beating their rival by 20 points, 69-49.

“I thought [Brandon Allison] did great,” Nate Allison said. “He had a great practice yesterday so I wasn’t surprised he came out and played well.”

Up next for the Chiefs is 2-1 Troup County. The McIntosh boys team will look to rebound from their loss and strengthen their 1-4 record, while the girls will attempt to shrug off the loss and build upon their hot 5-1 start. The girls play at 6 p.m. and the boys follow at 7:30 p.m. on Dec. 7 at McIntosh High School.

As for the Panthers, the boys take on a 2-4 Whitewater team looking to rebound from a 78-39 loss to Woodward. However, Starr’s Mill is seeking a crucial road victory against region competition. The Lady Wildcats, however, defeated Woodward 40-31, and don’t plan on losing a home game to the Mill. The games are at 6 and 7:30 p.m. on Dec. 7 at Whitewater High School.