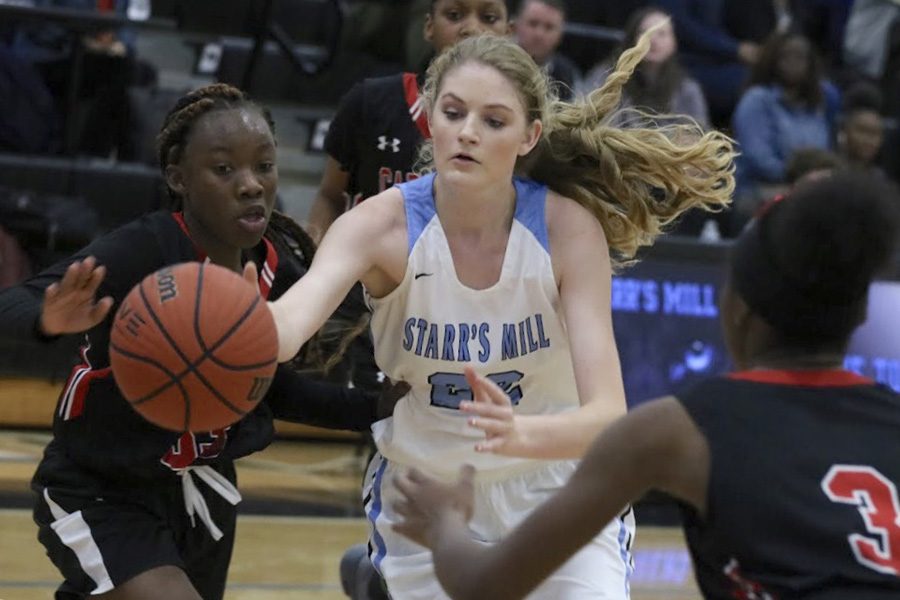 Freshman Jaclyn Hester fights for the ball against Jonesboro. Hester finished the game with 10 rebounds, and she made a clutch shot to send the game to overtime. In the extra period, the Lady Panthers pulled out a 54-51 win to improve to 3-0 in the region.

Following a 1-4 start to the season, the Lady Panther basketball team won three of their past four games to improve to 4-5 on the year. In doing so, they’ve jumped out to a 3-0 start in the region which has them tied for first place. Their most recent win came in an overtime thriller against Jonesboro, where they defeated the Cardinals 54-51.

“I’m proud of [the girls],” head coach Emily Sweeney said. “They stuck it in there when they easily could’ve let the game get away from them.”

Junior Tione Foster scored 15 for Jonesboro, and Casnius Long and senior Addison Harrison each added 13 points. The Lady Cardinals shot the ball at a high percentage and found open looks all over the court, but they were turnover prone and allowed too many easy fastbreak baskets at the rim for Starr’s Mill.

“We never gave up,” Angelo said. “We kept going. We believed in each other and we pulled it out,”

The first quarter was close between the two teams, and neither side gained an edge. Angelo racked up three assists in the quarter as she continually found Hudson in the paint. Hudson scored all nine points for the Lady Panthers in the first quarter, but they still trailed 10-9 going into the second.

The Mill opened the second quarter on an 11-0 run, putting them up 20-10. Their pesky defense disrupted the Jonesboro offense, and the Lady Panthers kept attacking the basket. The Lady Cardinals fought back, however, as their shot-making and offensive flow improved. By the time the eight-minute period was over, the score was 24-18.

“In the first half I was pretty confident,” Hudson said. “They were overplaying me so I was just getting backdoor cuts and my teammates kept getting me the passes.”

The third quarter was very similar to the second, as Jonesboro made their shots but turnovers prevented them from gaining a lead. They went on a 9-4 run to start the period, and the region foes battled back and forth throughout the quarter. Neither side gained an edge, and the score going into the fourth quarter was 37-37.

Starr’s Mill had multiple chances to pull away in the fourth quarter, but missed free throws kept Jonesboro in the game, and the Lady Cardinals grabbed a late lead over the Mill. With under a minute left, the Lady Panthers had the ball down 46-44. Junior Ashtyn Lally brought the ball up and found Hudson, who drove into the paint and kicked the ball out to Hester for a mid-range jumper. Hester knocked down the shot with three seconds left and ultimately forced an overtime between the two teams.

The Lady Panther defense held Jonesboro to five points during the extra period, and Starr’s Mill produced eight. Their active defense eventually prevailed, and the Mill earned a 54-51 victory.

The Lady Cardinals will look to rebound against Mt. Zion. After falling to 1-2 region play, they play the Bulldogs before continuing region play. The game is at 6 p.m. on Dec. 18 at Jonesboro High School.

The next game for Starr’s Mill is against Lovett. The Lions are 5-1 and will take on the Lady Panthers at the War Eagle Classic. This non-region game will be a test for a young Starr’s Mill team while they take a break from playing region opponents. They resume region play on Jan. 8 against Fayette County. The contest against Lovett begins at 4 p.m. on Dec. 21 at Woodward Academy.