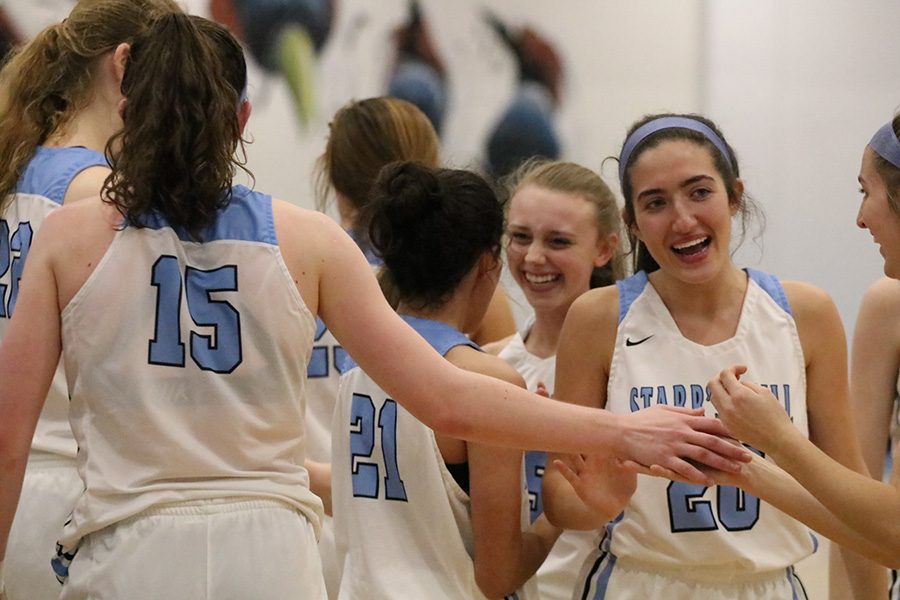 Junior Alice Anne Hudson high fives her teammates after their win over Ware County. Hudson scored 23 points and snagged seven steals in the 58-44 win. This is only the second time in school history a girls’ basketball team has advanced to the second round of the state playoffs.

Before this season, only one team in the history of Starr’s Mill girls’ basketball had advanced past the first round. On Friday, that changed as junior Alice Anne Hudson rebounded from an underwhelming performance in the region championship game to lead the Lady Panthers to a 58-44 win over Ware County.

“[Hudson] played really well,” head coach Emily Sweeney said. “Her teammates helped her out. I told them they were going to have to get her open and get her the ball.”

Ware County fell behind early as they only scored 10 first half points. Despite a 34-point second half, the Lady Gators were unable to make a comeback, and their season ended in the Panther Pit.

“I was just hot and all my shots were going in,” Hudson said. “I was getting open because of my teammates.”

From the tip, Starr’s Mill played with great intensity and didn’t allow anything easy for Ware County. The Lady Panthers started the game strong, hitting on three early three-point attempts. The Lady Gators moved the ball around the Mill’s 2-3 zone, and eventually found close looks inside. They managed to keep up with the hot shooting of the Lady Panthers, and Ware County only trailed 12-7 after one quarter.

The second quarter was all Hudson’s. She was unstoppable on both ends of the court, but it was her offense that blew the game wide open. The junior guard scored 13 points in the period, including a couple of three-pointers. The Lady Gators, who had no answer, couldn’t match the scoring onslaught from Hudson and finished with only three second quarter points. When the buzzer sounded for halftime, Starr’s Mill led 29-10.

“They started handling the pressure and I think they were having fun,” Sweeney said. “They got their lead, and they kept it.”

After the break, Ware County returned to the court determined to slow down Hudson. However, this opened up the court for the rest of the Lady Panthers. Angelo took advantage and scored six points in the period, and the Lady Gators gained no ground. Despite putting up 16 points in the period, the visiting team still trailed 45-26 going into the final eight minutes.

Junior Ryanne King came alive in the fourth, scoring six points and hustling on both ends. Junior guard Ashtyn Lally, who finished with nine points, also helped close out the visiting Gator squad. Once again Ware County had a solid quarter offensively, scoring 18 points in the fourth alone, but the overall team play from Starr’s Mill proved to be too much.

The Lady Panthers walked off the court after the final buzzer with a 58-44 victory and a ticket to the next round of the GHSA AAAAA State Playoffs.

“We’re the second team to ever go on from this round,” Angelo said. “So hopefully we can get one more and win next round, too.”

The Lady Panthers next matchup against Eagle’s Landing Christian Academy. The Lady Eagles are 22-5 this year, and defeated Warner Robins 79-62 in their first round contest. The two will face off on Feb. 20 at Eagles Landing. Game time has not been announced.