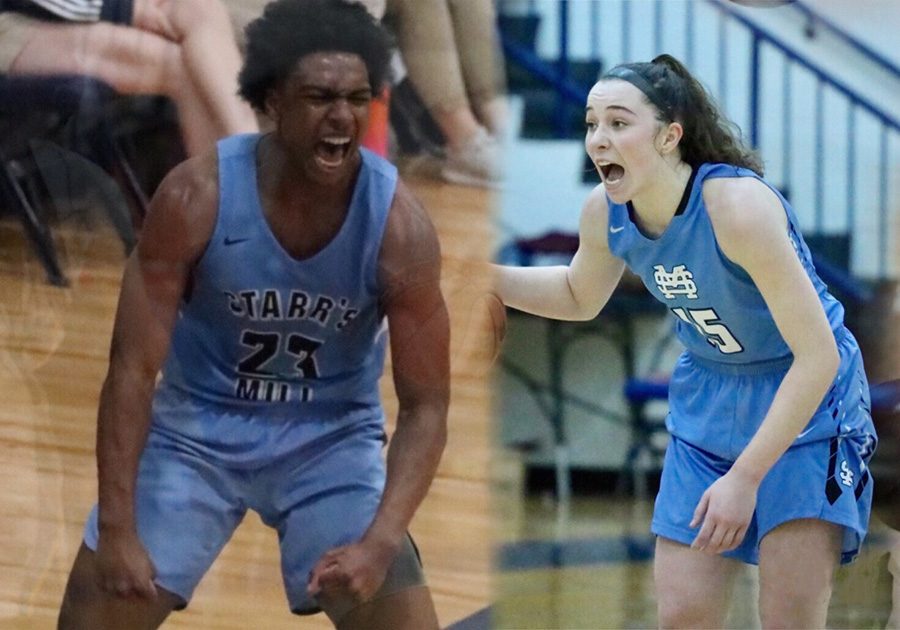 Juniors Jamaine Mann and Alice Anne Hudson. Mann and Hudson each led their respective teams this year at Starr’s Mill. Mann led the boys team with averages of 17.1 points and 7.5 rebounds per game. Hudson led the girls’ squad with 15.8 points and 2.8 steals per game.

Football and soccer have long reigned supreme as the top sports at Starr’s Mill, and their success doesn’t discredit that. Meanwhile, the basketball programs at the Mill have been overshadowed throughout their up-and-down seasons.

If the recent seasons are any indication, the Panther Pit may soon become home to two dominant basketball teams.

“[Our program] is going in the right direction,” girls’ head coach Emily Sweeney said. “Every season I ask them what their goals are. I put their goals on them.”

The girls’ team stated a very clear goal for this past season — make the second round of the state playoffs. The Lady Panthers achieved this goal, but nothing more, as they fell to Eagles Landing High School 41-38 in the round of 16. While the score wasn’t in the Mill’s favor, the game itself exemplifies the direction the team is going in.

The Lady Golden Eagles, ranked fourth in the state by Maxpreps.com, are currently 23-5 overall, and they are 13-0 at home. Starr’s Mill managed to play them close, and if it weren’t for a rare off-night from junior guard Alice Anne Hudson, the Lady Panthers could have won that game.

“Some of our shots weren’t falling,” Hudson said. “We all knew we could we could hang with them.”

Starr’s Mill finished this season at 20-9 overall and 11-1 in the region.This is the same team that didn’t even manage an appearance in the state playoffs two years ago. In the two seasons since, the Lady Panthers have finished second in the region tournament.

The rebuild began with Hudson. Her all-around offensive game (15.8 points per game)  and defensive prowess (2.8 steals and 4.0 deflections per game) immediately made the Lady Panthers a tough team to beat.

Meanwhile, junior Ashtyn Lally grew into a sharpshooter, making 40 three pointers and propelling the lethality of the Mill’s offense.

Senior Alyssa Angelo added a defensive edge with her 2.3 steals per game, and freshman Jaclyn Hester, Region 3-AAAAA Freshman of the Year, averaged 12.4 ppg and 8.3 rebounds per game.

This Lady Panther team will only lose two seniors to graduation. Long story short, they’re only getting started.

“After not even making state a few years ago, [this season] shows you how far we’ve come,” Angelo said.

Hudson, Lally, and Hester all return next season to a team hungry for revenge. After losing two consecutive region championships, Hudson and Lally only have one year left to take home the region crown. With a year now under her belt, Hester looks to help deliver the trophy.

“Our goal was to have a winning record and we achieved it,” Hudson said. “[We] had a successful year as a whole team.”

While the girls team slowly built up the program through the growth of their players, the boys’ team was completely reshaped last offseason. They acquired a new head coach in Charlemagne Gibbons and two new players in juniors Daryl Rice and Jamaine Mann.

Mann, a preseason All-State first team pick, averaged 17.1 points and 7.5 rebounds this year, while Rice adapted to his first season in a starting point guard role.

The Panthers finished this season at 15-14 overall with their final 52-39 loss coming to Warner Robins in the second round of the state playoffs.

They entered the region tournament as the No. 3 seed, and left the tournament with a win in the third-place game. In the first round of the state playoffs, they traveled to Statesboro and upset the Blue Devils on a buzzer-beating layup from Mann.

The end of the road came against the Demons, whose suffocating defense proved to be too much for a young Starr’s Mill team. The Panthers fell behind early in the second half, and Warner Robins slowed down their pace and wasted the clock.

“We played the defending state champions at their place,” Gibbons said. “We battled and duked it out in the first half.”

While the Panthers are losing senior forward, and boys’ all-time leading scorer, Nate Allison, the return of Mann, Rice, and others such as junior Wesley Grant, junior Zach Cerniglia, and freshman Malachi Townsend indicate a bright future for the Mill.

This year was one of change and learning as the team underwent major changes. Now with the initial experimental season over, Panther basketball is heading in the right direction — up.

“I’m proud of where this program is going,” Gibbons said. “The expectation is really, really high coming into next season.”