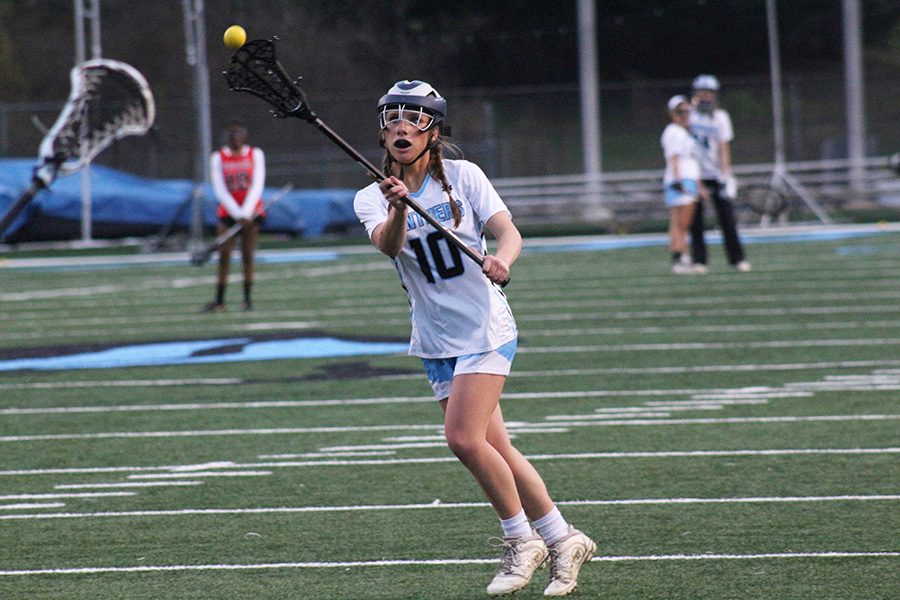 Sophomore Jacqueline Broderick looks to pass the ball. Good passing and communication allowed the Lady Panthers to blow out Dutchtown 19-1 for their first win of the season. The Mill’s offense overpowered the Lady Bulldogs’ weak defense by breaking down the field fast, and winning the majority of the face-offs to keep the ball on Dutchtown’s side of the field.

Last season, the Starr’s Mill varsity Lady Panther lacrosse team finished 18-3 with an undefeated 8-0 region record. A strong postseason run earned them a trip to the to the GHSA A-AAAAA State Championship, where they lost 15-7 to Blessed Trinity Catholic High School.

The Lady Panthers came into their first game of the year against Dutchtown High School wanting to start the year off strong. They did just that as the Mill took down the Bulldogs 19-1, never letting up on the attack while Dutchtown could not muster any offense.

“They all work so well as a team,” head coach Mary Lehman said. “They were all accurate in their passes, which is keen if we want to win.”

Team communication on the field all started with senior Ansley Wallace, who returned to the field this year after being sidelined all of last season with a torn ACL.

The first half was all Starr’s Mill, as Wallace and senior Kerry Cronin, along with juniors Anna Beardsley and Ryanne King all scored within the first four minutes of the game. This was made possible off wide open breaks across the field to make the score 4-0 early in the first half.

The scoring did not stop for the Lady Panthers as junior Victoria Fuller, sophomore Jacqueline Broderick, and freshmen Kathryn Lehman, Emma Grace Hepler, and Hannah Leon, all fired shots into the net due to lazy defense from the opposition, increasing the lead to 9-0.

“This win gets our confidence up,” King said. “We need to work on calling plays on the offensive end if we want to beat those tougher opponents in the area.”

Dutchtown finally got on the board with nine minutes left in the half when a Dutchtown midfielder fired a shot past junior goalie Karlee Jenks to make the score 9-1. However, the Lady Panther offense continued to torch the Bulldog defense.

Wallace, King, Cronin, and sophomore Jessica Deluca added on to the Panther lead to make the score 13-1. King scored one more goal to complete her hat trick and give the Mill a 14-1 lead at halftime.

“It was a good win,” senior Alyssa Angelo said. “This game helped us get the funk out of our play before we play much tougher opponents.”

The second half began with even more firepower on the offensive end for Starr’s Mill. Beardsley, Cronin, and freshman Briley Kalen scored off cut routes to give the Lady Panthers a 17-1 lead.

Offense aside, Angelo, sophomore Jaci Edwards, and the rest of the Lady Panther defense were not allowing Dutchtown any shots on goal leaving the Lady Bulldogs on their own half of the field for a majority of the game.

The scoring ended with Kalen and senior Caroline Andrews throwing the Dutchtown defense off guard to increase the lead to 19-1. The Panthers then chewed the clock until time expired to give the Mill a 19-1 victory to start their season.

“We expect to go back to state again this year,” Lehman said. “This time we expect to go all the way and win, but we are only going to take it one game at a time.”

The Lady Panthers next matchup is against Henry County High School. While a game time has not yet been determined, the two will face-off on March 7 in Panther Stadium.