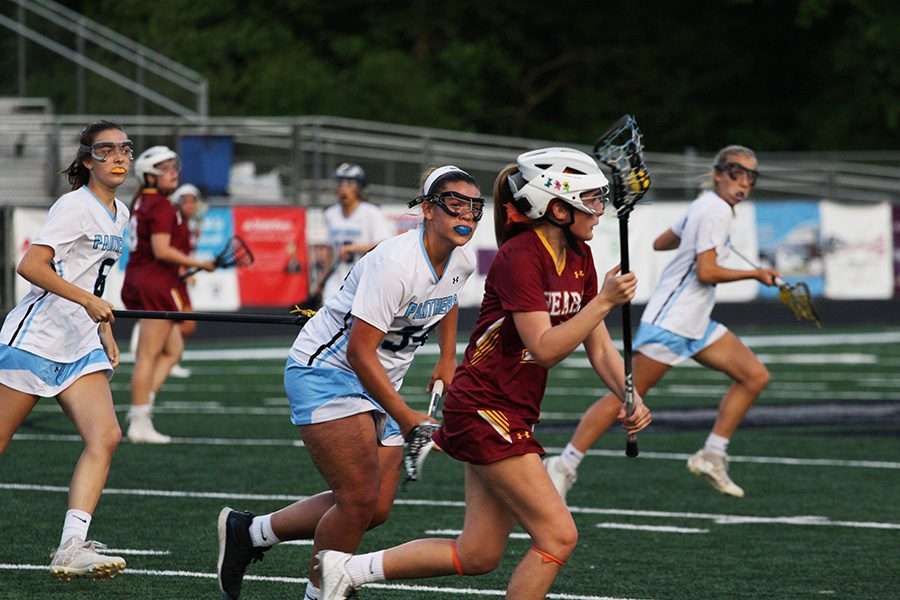 Senior Ansley Wallace chases down a Lady Bear player. Wallace and King combined for 12 goals against Holy Innocents in the Mill’s 19-7 win. Wallace missed last season’s run to the state championship with an injury, but she her impact has been felt for the Lady Panthers this year.

After cruising to a 19-goal win in the opening round of the state playoffs, the Lady Panther lacrosse team jumped out to an early 15-2 lead on their way to a 19-7 win over Holy Innocents Episcopal.

“We knew we needed to jump out early on this team,” head coach Mary Lehman said. “We worked on our ball movement and got it executed the way it needed to be.”

Holy Innocents was led by sophomore Annie Parker, who scored their only two goals of the first half and led their late run in the second half. The Lady Bears struggled to defend the Lady Panther fastbreak, allowing them behind their defense. Meanwhile, their offense was pestered by an aggressive Starr’s Mill defense, preventing any easy shots on goal.

“[Wallace] brings a lot of offensive help,” King said. “She’s another person with great stick skills and a mindset on the goal.”

The Lady Panther offense started the game on a roll, scoring twice in the first three minutes. Senior Caroline Andrews scored on an unassisted shot, then King received a pass from Hepler and found the back of the net. Parker responded with one goal, but the Mill followed with two more. Wallace snuck behind the Lady Bear defense and hit the twine twice on back-to-back goals.

Down by four goals, Holy Innocents called on Parker again, who beat the Lady Panther defense and scored her second goal, cutting the deficit to 5-2. Then, the Starr’s Mill offense switched gears. They went on an 10-0 run that saw Wallace score three more times. When the buzzer went off signaling halftime, the Lady Panthers led 15-2.

“Everyone was working together. Everyone was using the strengths of the team,” Wallace said. “Overall, we really worked well together.”

Wallace began the second half with her sixth goal of the night. Senior Kate Waters followed with her first goal of the night for Holy Innocents. The Lady Bears then scored two more goals, with one coming from Parker, cutting the deficit to 16-5.

Both teams traded goals for the last 15 minutes, resulting in a final score of 19-7 in the Mill’s favor. Despite outscoring the Lady Panthers 5-4 in the second half, Holy Innocents was too far behind to make a comeback. The loss ended their season with a 10-8-1 record.

“We really want it. We want to get back to the state championship,” King said. “We’re ready to come back and get revenge.”

Starr’s Mill now has a 15-4 record and look to keep their four-game win streak alive in the next round against Wesleyan. The Lady Wolves are also 15-4 and are coming off of a 12-11 win over Grady in the second round. The two will face off at 7 p.m. on May 9 at Panther Stadium.