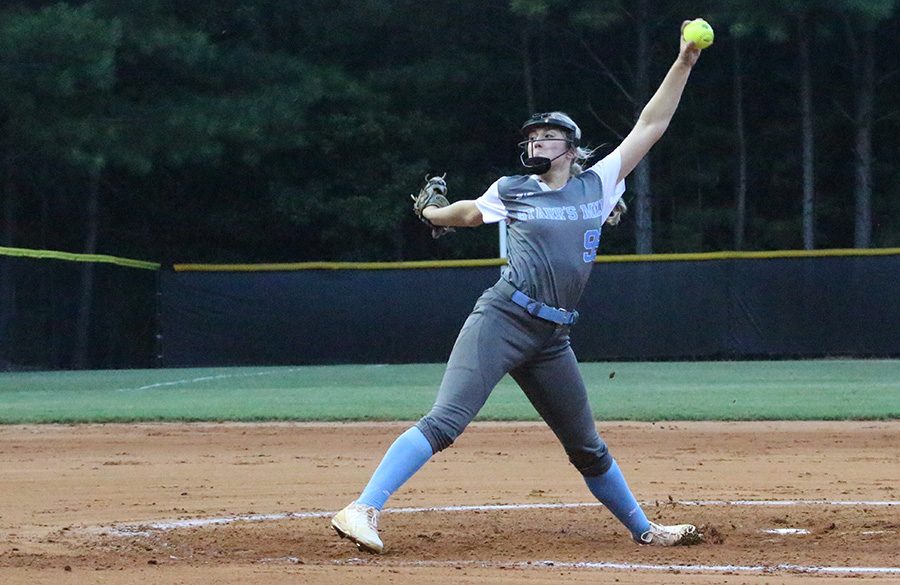 After going 4-1 at the Carrollton Leadoff Slam Tournament last weekend, the Lady Panther softball team opened up region play against bitter rival, the McIntosh Lady Chiefs. Starr’s Mill had great all around play, and the Chiefs never answered back, giving the Mill an 8-0 victory.

“This win definitely sets the tone for the season,” sophomore Lilli Backes said. “It always feels good to beat McIntosh, and it feels even better when we shut them out.”

On the offensive side, junior Jolie Lester went 4-4 with four RBIs, and sophomore Sydney Blair went 3-4 with an RBI. Defensively, Backes pitched a complete game one-hit shutout and threw 15 strikeouts while only allowing four walks.

“I pitched a pretty good game,” Backes said. “But my defense really backed me up, and my offense worked really hard to put us ahead.”

Junior Lauren Flanders led off for the Panthers, eventually bunting out, followed by Blair striking out. Lester gave the team its first hit of the game with a line drive to left for a base hit. However, Backes struck out on the next at-bat to end the top half of the inning.

Senior Emma Dunlap was walked to begin the bottom of the first, but Backes immediately struck out the next two batters, sophomore Abby Terry and junior Ashlyn Gaines. Junior Savannah Moore grounded out to end the first inning scoreless.

Senior Paige Andrews hit a leadoff double to begin the second inning, but sophomores Sarah Latham and Kalin Blinstrub grounded out shortly after, allowing Andrews to score the team’s first run. On the next pitch, senior Reagan Turner grounded out, retiring the side.

Backes started the next half of the inning by walking junior Rebecca Muh, but the next two batters hit flyouts. Backes added another strike out to end the second inning at 1-0.

“The girls played well and stayed focused,” head coach Mark Williamson said. “[Backes] threw a heck of a game, and that’s gonna keep us in most games if she’s throwing the ball like that.”

The Lady Panthers opened the third inning with a groundout courtesy of senior Kendall Robinson, and a flyout by Flanders. Blair got on base off a ground ball error shortly after, setting Lester up for an RBI double to get Blair home, increasing the Mill’s lead to 2-0. Backes followed with an RBI single, bringing Lester home for a 3-0 lead. Andrews then struck out to end the top half of the inning.

Backes struck out freshman Jessica Dellatore to begin the bottom half of the inning, but Dunlap hit a line drive single on the next pitch to give the Chiefs their only hit of the game. The next two batters were struck out by Backes, ending the inning with the score still 3-0.

The fourth inning was slow for both teams as neither team was able to generate any offense.

The top of the fifth started with a bang for Starr’s Mill, with Flanders hitting a leadoff triple, followed by an RBI double by Blair to make the score 4-0. Lester then hit an RBI triple to increase the lead to 5-0. Shortly after, Backes grounded out, but not before sending Lester home, making the score 6-0. Andrews and Latham each struck out after that, ending the half.

“I was looking for something early in the count,” Lester said. “Rebecca [Muh] is a good pitcher, but I was definitely hitting my zones.”

The bottom of the fourth was a quick inning for the Lady Panthers as Backes went three up, three down via strikeout to end the inning.

The next two innings were once again slow for both teams, which included another three up, three down pitching performance for Backes in the bottom of the sixth.

The top of the seventh started with Flanders and Blair each hitting line drive base hits, putting runners on first and second. Lester followed that up with a two-run RBI triple to cap the scoring off, making the final score 8-0 Starr’s Mill.

“We’ve got some talent, but there’s a lot of talented teams in 5A,” Williamson said. “We’ve just got to stay healthy and keep playing hard.”

The team followed up their first region play with a tough 6-0 loss at home against Northgate on Aug. 14. Starr’s Mill hosts Jones County at 5 p.m. on Aug. 19.