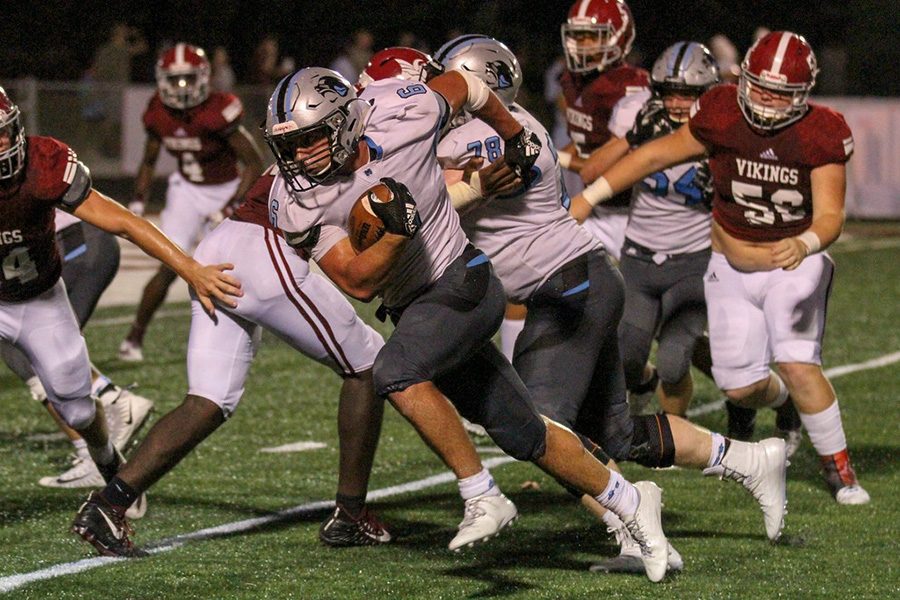 Senior Ben Bodne runs the ball against Northgate. Bodne picked up right where he left off against Mt. Zion, running for 140 yards on 21 carries and three touchdowns.

Revenge was on the Panther football teams’ mind as they made the trip to Newnan to take on Northgate, a team that came back from 13 points down to win 31-29 a season ago. Despite a slow start from the Mill, the team found a way to light it up on both sides of the ball, winning 28-0.

The Vikings managed 198 total yards, only 48 more than Bodne’s total from the ground. Senior running back Tanner Hughes led the way for Northgate, totaling 103 yards on 17 carries. The rest of the Viking running backs did not rush for more than 40 yards each, as the Panther defense was all over the team from the opening kickoff.

“We executed a lot better in this game,” Bodne said. “I couldn’t be more prouder (sic) of the team’s effort and performance.”

Inconsistency plagued both teams throughout the first quarter, with each team having big plays on offense, but resulted in the ball being punted away. With little production on either side, the first quarter ended with the teams locked at zero.

Slow play continued into the second quarter until junior linebacker Wes Haney recovered a fumble to set up great field position for a Panther touchdown. A few plays later, Bodne found his way into the end zone to make the score 7-0.

“We’ve got kids that have a run, run, run mentality,” Phillips said. “When you add the defense and the kicking, we’ve got a pretty good team.”

On their next possession, Northgate could not find any answers against the Starr’s Mill defense, recording another three and out. Sophomore Brandon Mathis busted a 95 yard run after the punt to the red zone to set up another Bodne touchdown as time expired to make the score 14-0 at halftime.

“We reminded everyone at halftime exactly what happened last year,” Bodne said. “We just said we can’t let it happen again, and we’ve got to come out and fire off just like we did in the first half.”

The Panther offense found a rhythm to begin the third quarter, as Bodne scored his third and final touchdown of the game halfway through the quarter, making the score 21-0 Starr’s Mill.

However, Northgate started using a pass attack that worked temporarily in the quarter, until another fumble recovery by the Panther defense kept the Vikings off the scoreboard. Both teams slowed the pace after that, keeping the score 21-0 at the end of the third.

“Everyone did their jobs,” junior linebacker Cole Bishop said. “Defense and offense stepped up, and we played really great as a team overall.”

By the fourth quarter, the Vikings had no answer on either side of the ball, as Starr’s Mill settled into the same groove they found in the third quarter.

The final score of the game took place with two minutes left in the game, as freshman running back Greigh Joseph punched the ball in from the two yard line to make the score 28-0. The Panthers let the clock run out after that, giving the team its first shut out win of the season.

“Revenge has indeed been served,” Phillips said. “We’ll be looking at the film from this game to get ready for Chapel Hill.”

This loss puts Northgate below .500 with a 1-2 record, tied with Mays High School for third place in Region 5-AAAAA. They play next Friday at home against Douglas County High School.

With a 2-0 record the Panthers sit atop Region 3-AAAAA. Up next for the team is another big revenge game against Chapel Hill, who embarrassed the Panthers last season as they clicked off over 500 yards of offense in a 56-21 win.

This week is Homecoming Week at Starr’s Mill. Be sure to attend the Homecoming parade at 5 p.m. on Thursday along Redwine Road. Kickoff for the Homecoming game is set for 7:30 p.m. next Friday at Panther Stadium. The Homecoming dance ends the week’s festivities at 7 p.m. on Saturday in the gym.