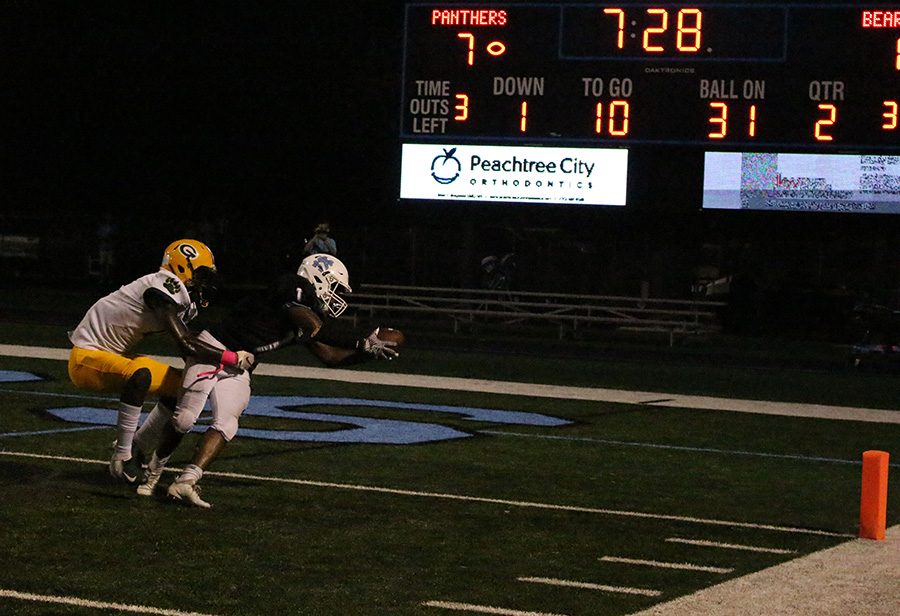 Senior Kalen Sims looks to score against the Bears. Sims had his best game all season against Griffin, totaling 195 yards on 28 carries and a touchdown.

Griffin came into Friday night’s game against the Panthers with an undefeated record and looking nearly unstoppable. However, the game belonged to Starr’s Mill.

With a run game that continued to dominate, a defense that made stops when it mattered, and a 50-yard field goal to win the game, the Panthers played an all around great game, winning 38-35.

“Playing [Griffin] comes down to the last play of the game,” head coach Chad Phillips said. “We’re very fortunate we came out with a win.”

Griffin stuck to the pass game as senior Darshaveious Foster threw for 280 yards, three touchdowns, and one interception. On the ground, senior Aalijah King totaled 54 yards on 15 carries and a touchdown, and caught two passes for 88 yards and a touchdown.

“Coming into this game, a lot of people said we were gonna lose,” Sims said. “We knew it was gonna be a close game, but we kept on playing hard, and it paid off in the end.”

Griffin came out of the gates hot to begin the game, driving the ball down the field, and ending with a quick pass from Foster to Green. However, the PAT was missed, giving the Bears only a 6-0 lead.

Starr’s Mill also started out on fire on the offensive end, marching down the field until Lawson ran it in for himself, giving the Panthers the lead 7-6. After that, both teams slowed down and focused on defense, keeping the score at 7-6 to end the opening quarter.

“We played exceptionally well as a team,” Bodne said. “We’re gonna keep on playing as hard as we can.”

Offense was back to being the order of the day for the Bears, as Foster threw a pass to Mayes two minutes into the second quarter to make the score 13-7. Starr’s Mill immediately answered back, as Sims ran to the outside for an easy 31-yard Panther touchdown to regain the lead 14-13.

Once again, the Bears answered back. Marching down the field, Foster threw his last touchdown of the night to King, regaining the lead at 20-14. However, the Panthers got the last shot, as Bodne scored his first of three touchdowns with mere seconds left in the half, making the score 21-20 Starr’s Mill at halftime.

“Last game we should’ve won, but our energy was dead,” Sims said. “We just had to click as an offense, and everybody clicked tonight.”

To begin the second half, the Panthers continued to make offense the priority, using the strong run game to their advantage. Bodne punched his way into the endzone for a second time, increasing the lead to 28-20.

However, junior Jordan Favors ran the kickoff back 96 yards immediately afterwards, decreasing the lead to 28-27. The Panthers got the ball back after that, and continued to march down the field with their run game. This continued for the rest of the quarter, keeping the score at 28-27.

“We’re gonna remember how we played tonight,” Bodne said. “Our defense could use a little bit of tuning, but other than that, we’re gonna continue to play.”

On the first play of the fourth quarter, Bodne scored his third and final touchdown of the day, making the score 35-27. Griffin came back onto the field looking for a score. Instead, they met a Panther defense that didn’t plan on letting the game slip out of their hands, forcing the Bears to punt the ball away.

Starr’s Mill could not capitalize and stretch its lead on the next possession, giving the ball back to Griffin. This time, the Bears succeeded, as King ran in for a score, and caught a pass for the two point conversion, tying the score at 35 with two minutes to play.

The Panthers had one final chance. They made their way down the field, and got past the 35-yard line with eight seconds left to play. Junior Connor Marke came out with a chance to win the game on a 50-yard field goal. It went straight through the uprights, giving the Panthers a 38-35 lead with four seconds left.

Griffin had a chance to win the game, but junior Cole Bishop intercepted the hail mary into the endzone, giving Starr’s Mill a huge 38-35 win.

“[Connor’s] got a college leg,” Phillips said. “I’m happy for him, and he’s gonna remember this play for the rest of this life.”

This loss is the first of the season for Griffin. They play at Jonesboro next week. A win against the Cardinals will put the Panthers back on top in the region.

Starr’s Mill has now snapped a three-game losing streak, evening their record at 3-3, with a 1-1 region record. Up next for the Panthers is Whitewater, who’s coming off a huge 21-20 upset win over Jonesboro.

The Wildcats are out to prove they’re better than expectations, while the Panthers are looking to stay in the hunt for their fourth consecutive region title.

The team stays in Panther Stadium to take on the Wildcats next week. Kickoff is set for 7:30 p.m.