The rest is history 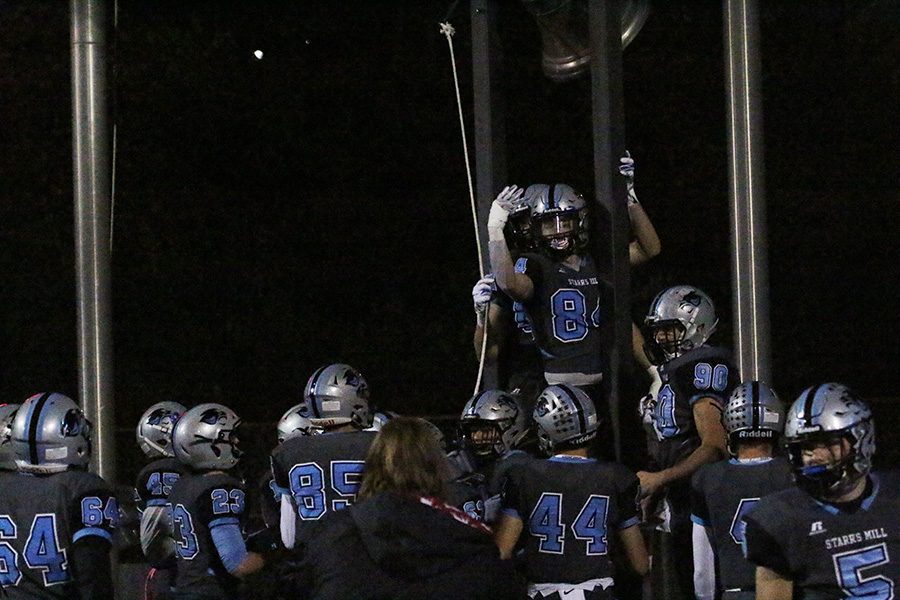 Senior Jack Barczak rings the victory bell and holds up a four on his hand. The Panthers have now won their fourth-straight region championship, tying them with Sandy Creek for the most overall region championships in Fayette County history.

The class of 2020 has done it. Coming off a close overtime victory over Riverdale, the Panthers needed one more win in order to clinch the region championship. Starr’s demolished the Fayette County Tigers from the opening kickoff, winning 49-7.

“Any time you can win a championship, it’s a huge accomplishment,” head coach Chad Phillips said. “I’m just so happy for our boys right now.”

Sims led the way with 100 rushing yards, and had his second consecutive season of 1,000 or more rushing yards.

Fayette County could not generate any offense as they only had 146 total yards compared to the Mill’s 378. Leading the way was senior T.J Sagoes, who rushed for 72 yards and scored the only touchdown for the Tigers.

“This is an awesome feeling right now,” senior Hunter Lawson said. “I’ve never dreamed in a million years that we would go four straight.”

The first quarter started off with a bang as Bodne found the endzone on a four-yard run on the first drive to make the score 7-0.

Fayette County had a quick three and out, followed by another Panther touchdown, this time from Phillips off a 25-yard pass from Lawson, making the score 14-0.

Fayette County continued to struggle on offense as the Panthers allowed nothing from the Tiger offense. This allowed Sims to find the endzone from two yards out as time expired, increasing the lead to 21-0 at the end of the first quarter.

“Coming into the season, everyone was doubting us,” Sims said. “We just kept on working hard, and we started off a little shaky, but we found our groove and it paid off in the end.”

Starr’s Mill continued to dominate on the defensive end in the second quarter, holding the Tigers for little to no gain.

To counter this, the Panther offense continued to slowly drive down the field, and Mathis found the endzone on a 19-yard run to make the score 28-0 at halftime.

“I’m grateful for another 1,000 plus yard season,” Sims said. “I give all the credit to my offensive line and the coaching staff, because if it wasn’t for them, I would have none of those 1,000 yards.”

The offense was still evident for the Panthers to begin the third quarter as Kalen used his speed  from a yard out to put Starr’s Mill up 35-0.

After this score, the Panthers put in their second stringers for the rest of the game. Despite this, the Panthers still had success on offense as Hoti punched his way into the endzone on a 16-yard run to make the score 42-0 at the end of the third quarter.

“We just gotta keep grinding,” Lawson said. “We gotta have a good practice all week and then get after it on Friday.”

Fayette County continued to struggle throughout the fourth quarter, not generating any offense whatsoever. The Panthers continued to generate plays on offense and capped off the drive with Elling finding the endzone on a 16-yard run to increase the Panther lead to 49-0.

However, the Tigers finally reached the endzone with seconds left, as Sagoes scored on an 11-yard run to put the Tigers on the board, but too little too late, as the Panthers took the history-clinching win 49-7.

“Last season, we took our opponent lightly, and we’re never gonna do that again,” Phillips said. “We’re gonna do everything in our power to win.”

Fayette County ends their season with a 2-8 overall record and an 0-6 region record.

The win also ties the Panthers with Sandy Creek for the most overall region championships in county history.

Now, the Panthers are the only team from Fayette County to make it to the playoffs. They play next week in Panther Stadium in the first round against Harris County, the No. 4 seed from Region 1-AAAAA. Kickoff is set for 7:30 p.m.