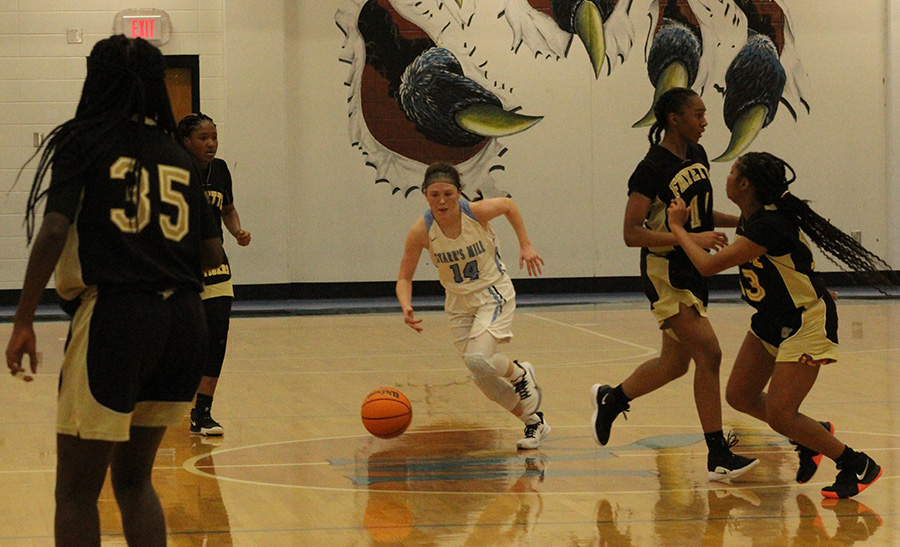 Senior Ashtyn Lally comes down the court during the Lady Panthers’ region semifinal matchup against the Fayette County Lady Tigers. Lally scored 12 points, all of which were three pointers. Starr’s Mill recovered from a sluggish first half to win the game 50-28 and secure a spot in the region championship. Lally recently committed to Huntington College.

One half into the region tournament semifinal between Starr’s Mill and Fayette County, things stayed close. Neither team was able to break out and get a huge lead. Entering the third quarter, the Lady Panthers broke away to outscore the Lady Tigers 14-4. After that momentum booster, Starr’s Mill cruised to a 50-28 victory to clinch a spot in the region championship.

“I told [the girls] that they just needed to have fun and play basketball,” head coach Emily Sweeney said. “We laughed a little bit in the locker room to get them out of their heads and they came out swinging [in the third quarter].”

Senior Alice Anne Hudson led the Lady Panthers in scoring with 14 points. Not far behind was senior Ashtyn Lally with 12 points, and sophomore Jaclyn Hester with 11 points.

“I think that we are always ready to be on the help line,” senior Kara Dial said. “Whenever we get beat, we’re helping each other out.”

Once again in the second quarter, the Lady Panthers could not produce any scoring. Similarly, their defense was not giving up much throughout the quarter. Starr’s Mill shot many free throws that kept them in the game. Despite playing uncharacteristically, the game stayed close with Fayette County leading 14-12 at the half.

Lally came out hot after halftime, shooting two free throws. Just a few minutes into the half and Starr’s Mill outscored Fayette County 8-2. It was at that point that Starr’s Mill continued to pile up momentum. By the end of the third quarter, the Lady Panthers led 26-18.

“[My performance in the third quarter] definitely boosted my confidence on offense and defense,” Lally said. “I know that after [high] school I still have basketball to look forward to, so that really helps.”

By the fourth quarter, Starr’s Mill had all the momentum that they could accumulate. They played lights out defense and produced more on offense to keep Fayette County at bay. When the game was over, Starr’s Mill won 50-28 and secured a spot in the region championship game to face Griffin for the second year in a row. Last year, the Lady Bears defeated Starr’s Mill 50-43 to claim the region title and secure the top seed heading into the AAAAA GHSA state playoffs.

“I hope they are gonna continue on with [this momentum] and win a region championship,” Sweeney said.

With all the momentum from the second half of play, the Lady Panthers will play host to the Griffin Lady Bears in the Region 3-AAAAA championship tonight. Tipoff is set for 7 p.m.