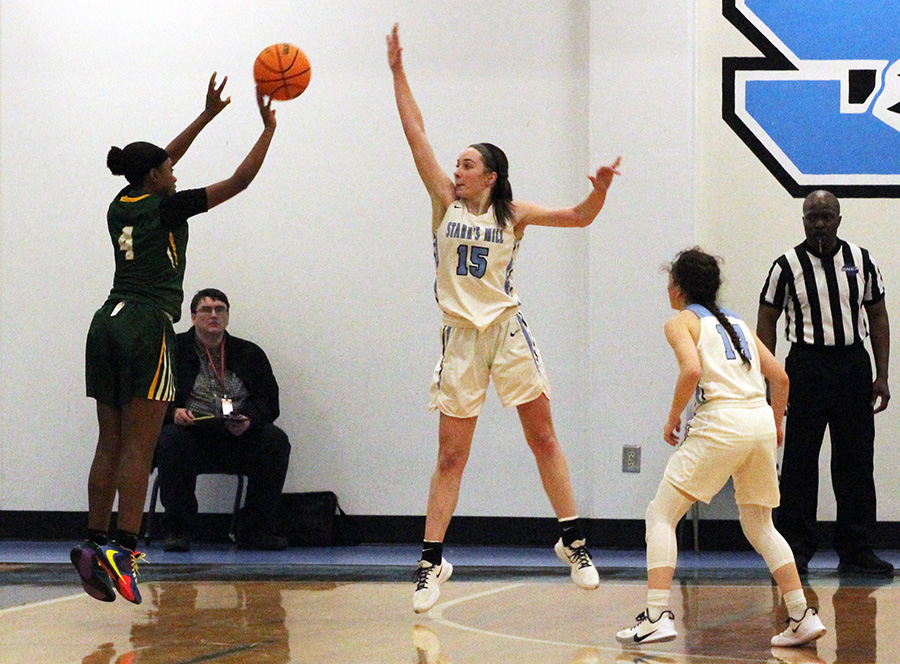 Senior Alice Anne Hudson goes up to block a shot during the region championship game against the Griffin Lady Bears in the Panther Pit. The Lady Panthers outlasted Griffin in the 47-38 victory. Hudson led the team in scoring with 18 points. All of the starting five for Starr’s Mill scored in the game.

All four quarters of the region 3-AAAAA girls basketball championship provided an exciting match between the top seeded Lady Panthers and the second seeded Griffin Lady Bears. In the final minutes, Starr’s Mill began to pull away to take the first region championship in program history by a score of 47-38.

Leading the charge for Griffin was senior Averyana Nelson with 18 points. Freshmen Samiah Puckett and Leah Turner both scored ten points each. Those three players combined to score all 38 points for the Lady Bears.

In the first quarter, senior Kara Dial opened the game playing strong defense and collecting defensive rebounds. Lally came through on the offensive side of the ball scoring five points in the quarter. Starr’s Mill was able to frustrate Griffin and disrupt their play.

“Because [other teams] don’t know who’s gonna score or who the ball is gonna go to,” Hester said. “It could be anybody and anyone could knock down a shot at any time.”

On the other hand, Nelson and Puckett scored nine points for Griffin. The Lady Panthers had trouble playing in transition and getting back on offense. Nevertheless, Hudson scored a late three to put the Panthers ahead 11-9 at the end of the first quarter.

Nelson played strong in the second quarter scoring eight points. Griffin went on a 6-0 to take a 15-11 lead. Starr’s Mill fought back and scored nine points in the quarter to stay in the game. By the half, the Lady Bears led the Lady Panthers 21-20.

“[Our variety of scorers] is gonna make it hard to scout us,” Sweeney said. “In any given night, anybody can be the leading scorer, so that’s gonna be really helpful. I’m just hoping the unpredictableness of it is gonna help out.”

Both teams played sloppy in the opening minutes of the third quarter. Through the quarter Hudson and Hester contributed points for the Lady Panthers. After a timeout by Griffin, Starr’s Mill began to pull away, and carried a five-point lead into the fourth.

Starr’s Mill began to play flat in the first half of the fourth quarter, which gave Griffin an opportunity to come back. The game became a lot more physical in the final minutes. Senior Ryanne King and Hudson both scored points to push for the region title.

Griffin lost Nelson with two minutes to go due to foul trouble. Puckett and Turner did their best to help provide a championship push, but ultimately could not muster enough scoring. Starr’s Mill finished out the game to win the region championship, 47-38.

“Definitely chemistry [makes us special] and it rolls over to the court,” Lally said. “We just work so well together and we know what we want to achieve at the end of the season.

This win marks the first time Starr’s Mill girls’ basketball has ever won a region championship. They will go into the state playoffs as a top seed, guaranteeing them two home playoff games. Everything is falling into place for the Lady Panthers. They have all the pieces needed to make an incredible run in the state playoffs.

The Lady Panthers will remain in the Panther Pit to host Warner Robins this Friday in the first round of the AAAAA GHSA state playoffs. Tipoff is set for 6 p.m.