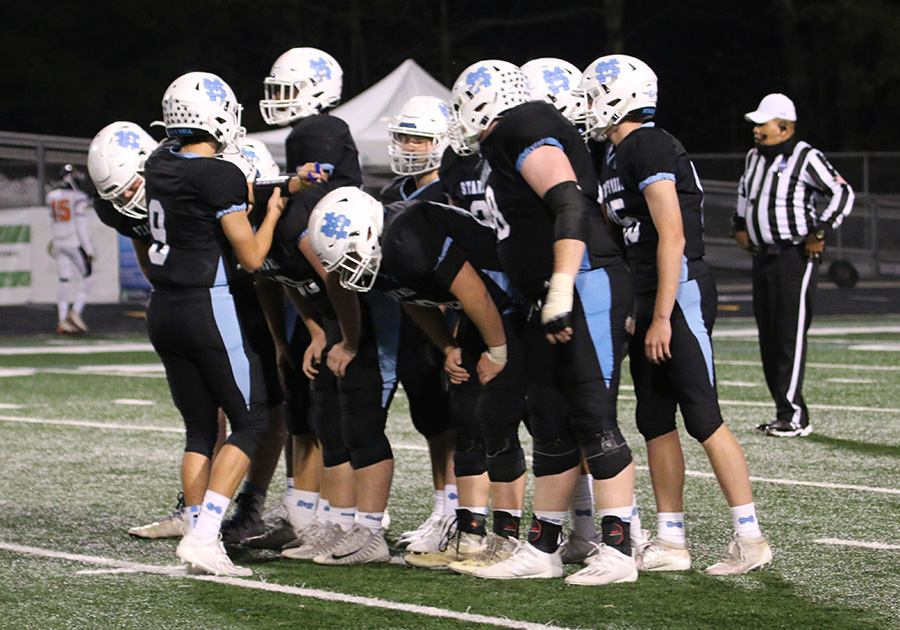 Starr’s Mill offense huddles up during their first round of the GHSA AAAAA state playoffs last Friday against the Mundy’s Mill Tigers. The Panthers fired on all cylinders early to take a substantial lead and never lost control, winning the game 63-6. The offense broke the record for points scored in a game, originally set at 61 against Stockbridge in 2001. Seven different scored players for Starr’s Mill

It is playoff time in Georgia, and every game is a win or go home situation. The work Panther football put in has gotten them to this point but they want to go further. To take the next step deeper into the playoffs, they demolished the Mundy’s Mill Tigers in a 63-6 blowout victory.

“We’ve used the analogy about keeping your hands on the wheel and following through in complete focus of everything in front of us,” head coach Chad Phillips said. “We had a really good week preparing. Coaches had a great plan, our staff did a really good job of getting our guys ready, and the guys executed the plan real well.”

Senior wingback Devin Barnett highlighted a dominant running game with eight carries for 80 yards and two touchdowns. Four different runners broke more than 50 yards, and seven different Panthers scored. Sophomore quarterback Will Yarbrough served well as a dual threat with three carries for 20 yards and a touchdown on the ground, and four pass completions for 60 yards, two touchdown passes, both of which went to sophomore tight end Josh Phifer, and one interception in the air.

Limiting Mundy’s Mill to one score, the Panther defense kept the Tiger offense to 149 yards of total offense. Sophomore quarterback Dajuan Springer had it rough all night, going 7-for-17 with 81 passing yards, a touchdown, and three interceptions, two of which were snagged by senior captain Cole Bishop. The Tiger’s most efficient runner, freshman Darrell Cummings, was restricted to three carries for 25 yards.

“I think it really helped just getting off the ball and being quicker than everyone else,” Phifer said. “That really made me get more open, coming off the ball quicker.”

After winning the coin toss, the Panthers decided to start the game with the ball to begin the first quarter. The opening kickoff return allowed the Panthers to start their first possession in Tiger territory. Three plays into their drive, sophomore running back Greigh Joseph went 25 yards into the end zone for the Panthers’ first score of the game to lead 7-0.

On the Tigers’ first play of their next drive, senior defensive lineman Andres Moc tipped a pass from Springer, intercepting the ball and took it into the end zone for a touchdown. An illegal block penalty removed the touchdown, but Starr’s Mill kept possession. Two plays later, Yarbrough found a hole up the middle to score a 24-yard touchdown. With barely 90 seconds off the clock, the Panthers were already up 14-0.

A punt by Mundy’s Mill gave the Panthers possession in mere minutes. Yarbrough attempted to rush a pass that was intercepted by senior Antoine Green. Green took the ball from Mundy’s Mill territory all the way down to the Panther 27-yard line where he was tackled by Yarbrough.

“It’s do or die,” Moc said. “We needed to win, so we left it all out there. [My job was to] leave my heart out there, stop them a couple times, make some big plays, and that’s all.”

After the Tigers punted yet again, the Panthers proceeded to march downfield. A screen pass from Yarbrough to Bishop for nine yards set the Panthers up at the ten yard line. Barnett took the ball outside to the right down to the end zone for his first touchdown of the night, bringing the Panther lead to 28-6.

Two plays into the ensuing Tiger drive, Bishop came up with his first interception of the night. The Panther offense went down the field and capped off their drive with a 24-yard touchdown pass to Phifer to go up even further 35-6. With that, Mundy’s Mill took the football as time expired in the first quarter.

“Our juniors are now seniors. Our freshman are now sophomores. It’s been a long season, but now they’ve grown accustomed to everything that happens,” Phillips said. “Main thing is [the offense] is playing with a whole lot more confidence. They really believe they can do it and we’re going to continue and improve.”

Both teams exchanged lengthy drives to open up the second quarter. With about four and half minutes to go, Starr’s Mill regained possession and milked what was left of the clock. Having taken the ball all the way down to the three-yard line, Barnett punched it in for yet another score to bring the Panther lead up to 42-6.

Mundy’s Mill took the ball with less than thirty seconds to go with hopes to pull off a scoring drive for some momentum. Their drive was cut short on the very first play when they fumbled the ball, which was recovered by Moc. In the red zone, the Panthers mustered up one last scoring drive that ended with a four-yard passing touchdown from Yarbrough to Phifer. The touchdown gave the Panthers a 49-6 lead at the half.

“[This offense] is getting a lot better. I have a lot more confidence for next week,” Phifer said. “If we can put up nine touchdowns against [Mundy’s Mill], then there’s no doubt in my mind that we can do the same against [Coffee].”

With one half to go the writing was on the wall for Mundy’s Mill. Starr’s Mill had all the momentum as they began taking starters out of the game one after another. Mundy’s Mill tried to get something together, but the Panthers shut them down. Bishop recorded his second interception late in the quarter, which opened the door for freshman Anderson Cardoza to get a three-yard rushing touchdown to increase the lead to 56-6.

Moving into the fourth quarter, mercy rule was enacted and the Panther starters were effectively taken out of the game. To rub salt in the wound, freshman Will Clem picked off the Tigers’ backup to set up another score. Sophomore Jameson Inagawa put the game even further out of reach with a three-yard rushing touchdown to bring the lead to 63-6.

The final drive from Mundy’s Mill consisted of them slowly taking the ball downfield for about five minutes. This drive ended in a lost fumble that was recovered by junior Zach Stevenson. Starr’s Mill went in victory formation to take a 63-6 victory and advance to the second round.

“Our defense feels confident. We’re not done yet though,” Moc said. “We still need to keep getting better, working harder.”

Alongside breaking school records, the Panthers scored more points in the first round than any other team did this past week. They will move on and host the Coffee Trojans, a top-10 team in 5A coming off of a first round victory at Ola, defeating the Mustangs 31-7.

Mission two resumes as the Panthers will defend Panther Stadium against the Coffee Trojans this Friday. Kickoff is set for 7:30 p.m.