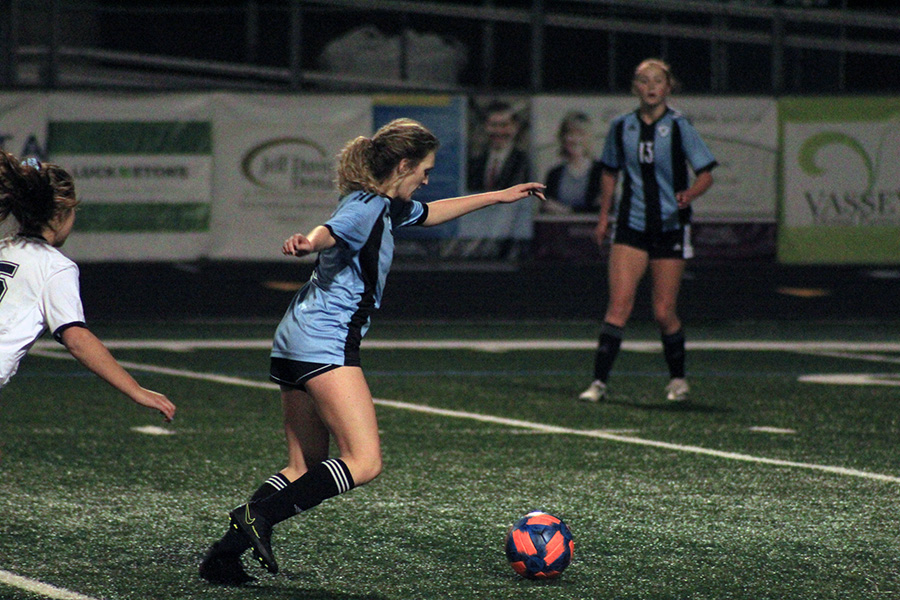 Senior midfielder Darby Olive moves the ball downfield during the girls varsity soccer game on Tuesday against the Marist. The Lady Panthers tied in a difficult game against Marist, 0-0.

Coming off a loss to St. Pius X, the Lady Panthers soccer team needed some momentum with region play ahead. However, last week they matched up against a formidable Marist War Eagle team. The game ended in a 0-0 tie.

It was a tough game with both teams constantly fighting for control of the ball. The Starr’s Mill defense, despite the Lady Panthers giving up 20 shots on goal, pushed through. Both team’s keepers had six saves.

“They had so many people pushed back that we were literally running out of men back there,” junior keeper Alexis Chapman said. ”We just need to work on getting people back.”

At the beginning of the first half, the Panthers took several shots on goal, but as the half progressed the script flipped.

Neither team scored, though Marist had a few chances. Chapman was impressive in the box and communicated effectively with her teammates.

“Good criticism really helped people get around, and helped direct the new people and the freshmen who don’t really know what to do yet,” junior Maddie Defler said.

The Lady Panthers started off the second half by switching keepers to sophomore Addison Smith. Like Chapman, Smith was exceptional at communicating with her teammates.

Comparable to the first half, no team was able to gain an advantage. As a result, the game stayed close but no one scored, ending the match in a 0-0 tie.

“We started talking a lot more finally,” head coach John Bowen said. “We worked so hard to get the ball back and ended up giving it away so easily, which doesn’t make it very hard on [Marist].”

After defeating Newnan 3-1 Friday night, the team’s record improved to 3-2-2. Region play begins on March 2 with a match at Northgate. Kickoff is set for 6 p.m.