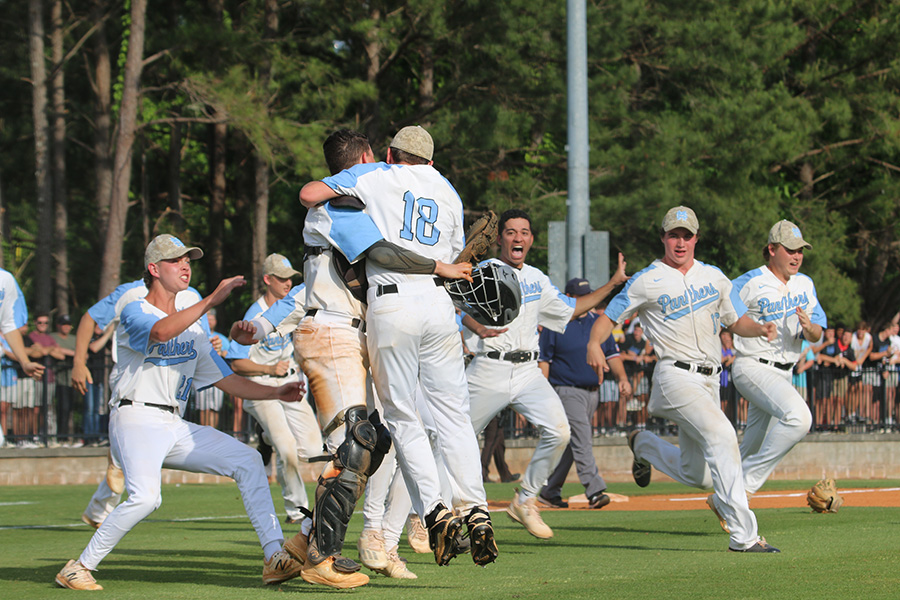 Senior pitcher Daniel Courtney (right) hugs senior catcher Sean White (left) as the rest of the team crowds around them at the end of the AAAAA semifinal series against the Ware County Gators. In a tightly contested series, Starr’s Mill won in game three over the Gators to advance to the state championship for the first time since 2009. They will face the Loganville Red Devils, who are seeking their fourth consecutive state championship title at Truist Park starting next Tuesday at 5 p.m.

While Panther sports were vying for state championships across Georgia this past weekend, Starr’s Mill baseball was defending its home field for a chance to play in the AAAAA state championship game at Truist Park. In their way was a scrappy Ware County team that bested Cartersville days prior.

“[The seniors] were ready to play,” head coach Brent Moseley said. “They know this was their last run at [a state championship]. We didn’t get to play it last year, it got taken away from them. They know how important it is.”

The Panthers unleashed their hitting talents upon the Gators, including scoring eight runs at the top of the sixth in game two. Seniors Ryder Wagenknecht and Sean White had standout series. Going 6-10 and 11-12 at the plate, respectively. Together, they brought in seven runs.

Senior shortstop Caleb Stewart started game one for the Gators with a leadoff home run. However, the Panthers answered back courtesy of Yeager batting in junior shortstop Josh Tate. After one inning, the game was tied at 1-1.

Both junior pitcher Landon Dean and Yeager recorded three-up-three-downs in the second inning. Stewart batted in another run at the top of the third to retake the lead. Junior catcher Trey Jeffers hit a sacrifice fly to centerfield that brought home another run. Dean recorded another three-up-three-down at the bottom of the third to retain a 3-1 lead.

After Yeager shut down Ware County at the top of the fourth, Courtney got a base hit off a full count to cut the Gator deficit to one. Neither team changes the score in the fifth inning. At the top of the sixth, the Gators got another run off of an error to go up 4-2.

“I didn’t really get to contribute my freshman year [in the semifinals], but I saw the other guys and learned from them,” White said. “I tried to do my best and play my game. I did pretty well, so it all worked out for the best.”

In the bottom of the sixth, Starr’s Mill loaded the bases for Wagenknecht to bat in two runs that tied the game. Freshman Heath Whitlock batted in Wagenknecht on the next at-bat to take the lead. Heading into the seventh inning, the Panthers took their first lead 5-4.

Tate relieved for the Panthers, and gave up two runs for Ware County to take a one-run lead. The Panthers did not respond in the bottom of the seventh. At the end of game one, Ware County won 6-5 to take the first game of the series.

“If we play, we’re okay. If we don’t play, then we struggle,” Moseley said. “We just got to play, we got to play better. In the semifinals, you can’t make mistakes. We made a lot of mistakes.”

Ware County started with the lead again in game two when Jeffers batted in Steward for a 1-0 lead. Following a silent second inning, Dean brought home Stewart to go up 2-0. Senior infielder Eli Jones hit a sacrifice fly that put the Panthers on the board. After four innings, the Panthers trailed 2-1 to the Gators.

Going into the fifth inning, the Panthers’ backs were against the wall. Senior outfielder Thad Ector helped the Panthers start clawing back with an RBI to tie the game. White put Starr’s Mill in the lead with another RBI. Courtney recorded a three-up-three-down to keep the Panthers ahead 4-2.

“We were upset that we lost our first game, but we did not want our season to end,” Yeager said. “We had to buckle up and really give it all we got, and that’s what we did.”

At the top of the sixth, Whitlock started the scoring by batting in Wagenknecht. Sophomore Caden Henderson gave up two walks to load the bases. Tate capitalized with an RBI that started a chain reaction of scoring. White was hit by a pitch, which brought in another run. Then Yeager walked, bringing in yet another run. With Starr’s Mill up 7-2, the Gators made a pitching change.

Stewart was now on the mound, and he walked Jones to give Starr’s Mill another run. Courtney hit a sacrifice fly to left field that added another run. Wagenknecht batted in Yeager, and an error gave Jones the green light to round third base and make it home. In one inning, the Panthers scored eight runs to go up 12-2.

There was nothing the Gators could do as Courtney recorded another three-up-three-down. Starr’s Mill won game two 12-2 by mercy rule. The series would all be settled the next Monday in game three.

“We all knew what was on the line,” Dun said. “I knew I had to put up some zeroes [because] they can hit… I just knew I had to go out there and put my team in a position to win.”

Like the previous two games, Steward rounded the bases to put Ware County in the lead in the first inning. Starr’s Mill retaliated by capitalizing off on an error in the bottom of the second to tie the game. The score remained 1-1 through the third inning.

Dun threw a three-up-three-down at the top of the fourth to give Starr’s Mill the chance to take the lead. A pitching error during Wagenknecht’s at-bat put two runners in scoring position. A base hit brought Yeager home and gave Starr’s Mill the lead. Whitlock got a base hit that batted in Courtney.

Sophomore Evan Harrah was next at-bat. He got on base and brought home Wagenknecht. Assistant coach David Cooper wanted him to keep going and grazed Harrah. Because he touched Harrah, the umps ruled him out. Although, they kept the run, and a 4-1 lead.

“I was seeing a lot of early offspeed,” Wagenknecht said. “They were trying to throw me outside, which got me at my first at-bat, but then my second at-bat… I got a heavy pitch up in the zone. I did what I could with it and got the job done.”

Neither team added to the scoreboard through the fifth inning. At the top of the sixth, the Gators put the pressure on the defense and Dun by loading the bases. With a two-two count, Dun did not waver. He threw a slick curveball to get the strikeout and close the inning, shutting down Ware County once again.

White added onto the scoreboard by batting in two more runs, increasing the Panther lead to 6-1. At the top of the seventh, Courtney came out to relieve. After a walk, Courtney threw a strikeout, and next was a popout to first base. With two outs and one on base, Stewart stepped up to the plate.

Fighting for the chance to stay alive, Stewart battled hard against Courtney. It came down to a full count. Steward hit the ball, but a 6-3 groundout put an end to the game. After three games of tension, Starr’s Mill won game three 6-1 to take the series and punch their ticket to the state championship.

“[I’m thinking about] going out there [to Truist Park] and keep doing what we’ve been doing,” Dun said. “It’s going to be really fun.”

Starr’s Mill will travel to Truist Park for the AAAAA state championship against Loganville on May 25. The first game is scheduled for 5 p.m., and the second game thirty minutes after game one. Game 3, if necessary, will be played at noon on Wednesday.