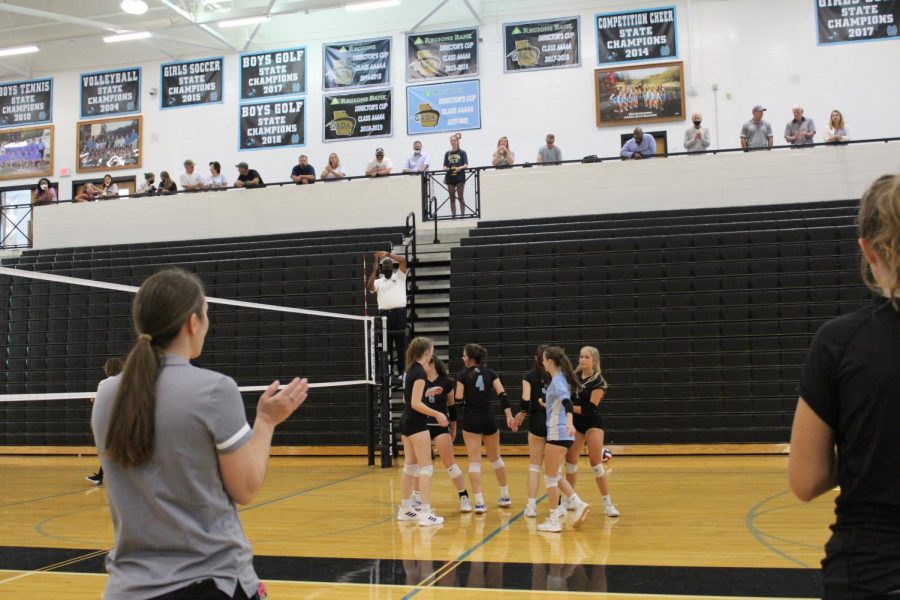 JV volleyball head coach Shayne Thompson looks on as the team celebrates a point against Fayette County. The Lady Panthers cruised to victory over the Lady Tigers 25-6, 25-4, but could not overcome mid-game deficits versus East Coweta losing 25-19, 25-18.

This past Monday, the JV volleyball team split matches against Fayette County and East Coweta. The Lady Panthers defeated the Lady Tigers 2-0, but lost to the Lady Indians 0-2.

The team has been honing in on certain techniques of the game during practices to prepare for these matches.

JV volleyball head coach Shayne Thompson said that during practices, the team has been “working on rotations, covering, hitting, tipping, and serving.”

In the first set against Fayette County, Starr’s Mill scored eight points right out of the gate, setting an early lead. Following a timeout called by Fayette County, sophomore Hannah Thompson continued her serving streak for another seven points, drawing out the score to 15-0. This decided the tone for the set and ultimately the match, with Starr’s Mill dominating over Fayette County.

“[My serving streak] made me happy, and that made everyone else happy,” said Hannah. “I think it got in [the Fayette County players’] heads a lot and so then they were likeー well…”

The second set followed suit of the first. Starr’s Mill commanded the points off the serve and hit the ball where Fayette County could not return it. The Lady Panthers won 2-0 (25-6, 25-4).

The first set began with the two teams battling back and forth to hold a lead, but Starr’s Mill eventually slipped behind 10-9. Starr’s Mill called a timeout when the score reached 11-9 in an attempt to recuperate, but the Lady Indian lead quickly moved to 21-11. The Lady Panthers started to make a late comeback and reached 23-17 before East Coweta closed the set 25-19.

“Definitely covering, that’s where we’ve lost most of our pointsー was lack of covering,” Shayne said. “We need to make sure we keep those serves in, and what to do when we’re getting out of position.”

The second set followed the format of the first, with both teams playing hard. Once again Starr’s Mill began to trail only to attempt a late comeback. East Coweta claimed the second set 25-18.