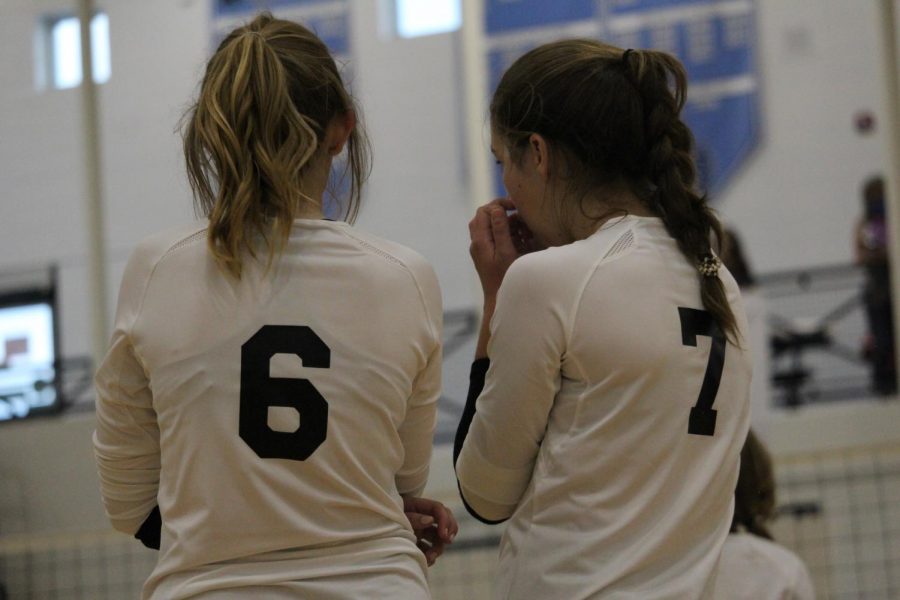 Quinn Myers and Shannon Callahan prepare for the next play. The Panthers lost 2 out of 3 matches against some tough schools.

The 9th grade volleyball team put up a great fight against some tough opponents, winning one of three matches. They had some moments of miscommunication, but saved, blocked, and set well throughout all three matches.

“We had some mistakes, we had some trouble with serve receive, and we didn’t hit enough,” head coach Trey Hoffman said. “We’re going to focus on hitting and serve receive.”

The Panthers started off their first match against Houston County’s 9th grade team with saves from their defensive specialist Madi Cathcart and two spikes from outside hitter Allie Thomas. Through the set the girls had a few mistakes, often saved by Cathcart. The Panthers won the first set.

“I think I’ve gotten better because of my focus on my position,” Callahan said. “One of the most important things in volleyball is practice and you get better as you train.”

Similar to the first match, the Panthers’ strength in the second match against Houston County’s JV team was saving. The team’s communication improved at first, but waned in the second set.

Right side hitter Perry Schwieger had multiple saves, keeping the ball in play. The girls fell behind due to some mistakes, and ended up losing the first set.

The Panthers gained a lead due to their opponents’ mistakes, and the team’s power shifted to the front, but the back still stayed strong thanks to the play of Morrow. The Panthers ended up losing the match 2-0.

“Our first game we were really shaken and we didn’t have good communication,” Schwieger said. “As we’ve played during the season, we’ve gotten better.”

In the Panthers’ final match against East Coweta, the girls kept their focus and power in the front of the court. Like the first match, there was a lot of blocking power coming from Myers.

At the start of the game East Coweta started off strong with a big lead. The Panthers were improving on their communication on the right, but were struggling on the left. They made a lot of mistakes and gave the opposing team points. Even though they caught up, they still lost the first set.

In the beginning of the second set, the Panthers scored and started out with a lead. They kept at it until East Coweta started hitting some good shots and spikes. East Coweta would win the match 2-0.

“I’ve definitely learned to communicate more and play harder,” Myers said. “We all work together really well and we all have improved.”

The Lady Panthers play again on September 18 at Lakepoint. The next home match is scheduled for September 28 against Houston County and Spalding County starting at 5:30 p.m.