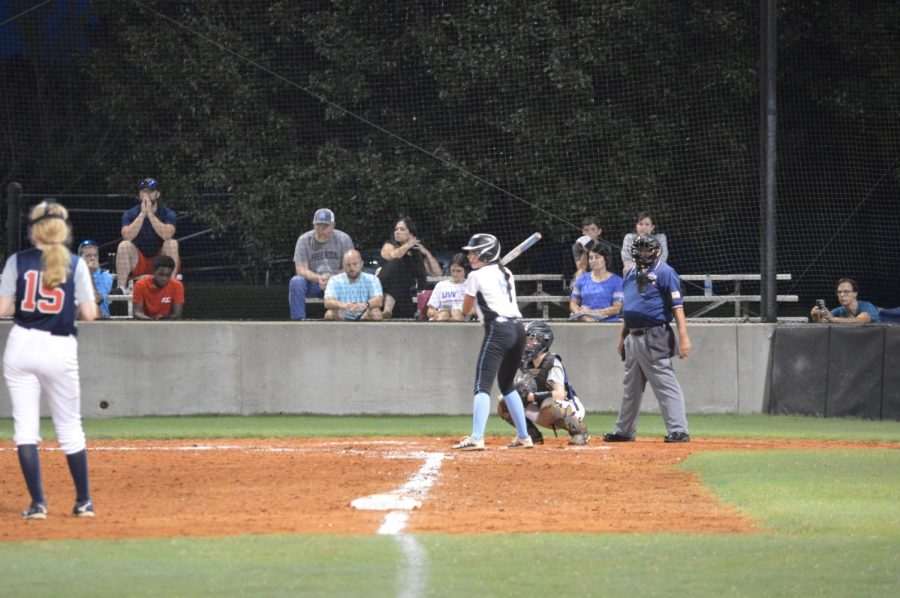 Panther batter awaits a pitch. Starr’s Mill kept pace for the first two innings of the game. However, Northside scored a combined 15 runs in the third and fourth innings.

Following a close varsity softball game against Northside which resulted in a 1-0 loss, the JV Lady Panthers took the field to play the JV Patriot team.

However, the Lady Patriots posted eight runs in the third inning and added seven more in the fourth, en route to an 18-0 win in four innings.

“This is a really young team,” head coach Todd Little said. “We are trying to get them as much experience as possible. Some of them are playing for the first time.”

Against the Northside pitcher, Starr’s Mill managed a single and two walks. Eighth grader Kimberly Palmer had the lone hit in the bottom of the first inning.

Meanwhile, the Lady Patriots racked up 18 hits along with seven walks.

“[The team] could be down by 18 and you wouldn’t know it,” Little said. “They are at least talking to each other. That’s really one of the things that’s helping.”

Through two innings both pitchers Sophia Lombardo and the Northside pitcher each recorded five strikeouts.

Northside jumped to a 2-0 lead in the top of first after a lead-off triple followed by a walk, a single, and a two-run double.

Starr’s Mill could only manage a single in the bottom of the first, the team’s only hit of the night.

“They just need experience and as many reps as we can give them,” Little said.

Northside added a run in the top of the second. After a walk to begin the bottom of the 2nd for the Lady Panthers, the following three batters struck out.

The top of the third is when Northside took over. Three doubles, three singles, a triple, and a couple wild pitches helped the Lady Patriots add eight more runs to their lead. This also prompted a pitching change, bringing in freshman Emma Arnold. The inning ended in a double play with Northside up 11-0.

“I think we’ve gotten a lot better,” Palmer said. “At the beginning we weren’t doing too well. Nobody knew what they were doing. Now I think the players have moved on and are like, ‘Now Iknow a little more about the game’.”

After the Panthers could not cut into the lead, the Lady Patriot bats stayed hot. Five singles and four walks helped Northside add seven more runs and increase the lead to 18-0. The game would end after four complete innings.

“They have progressed. It’s maybe not noticeable in games. Sometimes watching them warming up and throwing, it’s not noticeable either,” Little said. “I promise there have been improvements. Most of them are mechanical, and they have to keep trusting those new mechanics. It’s really easy to drift back into old habits, but they do know a bit more about their mechanics. That’s what we keep trying to fix.”

The Lady Panthers traveled to McIntosh on September 22 and lost 8-1. Starr’s Mill finishes the season by traveling to Newnan on September 29.