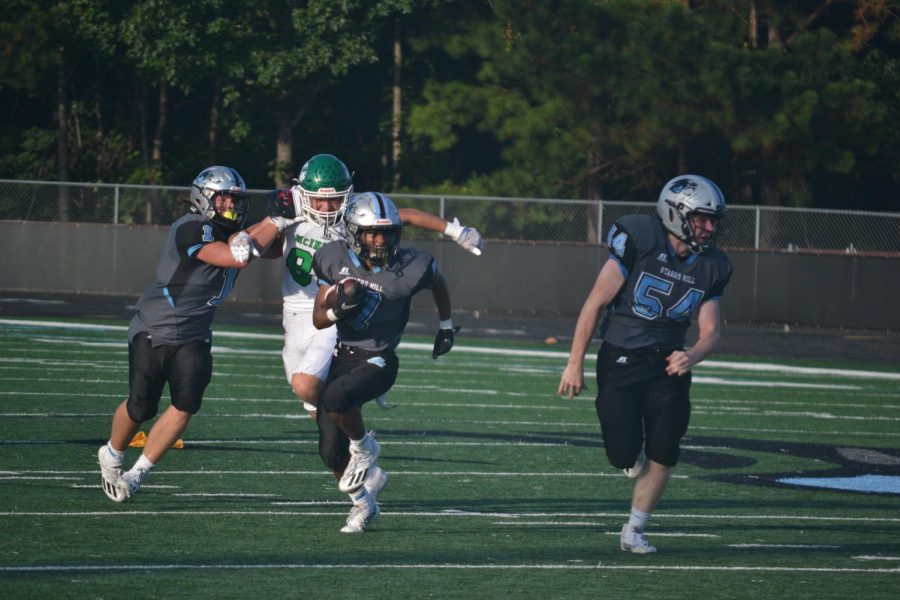 Dominant defense and a nearly unstoppable rushing attack propelled the Starr’s Mill JV football team to a 41-8 victory over McIntosh on October 7.

“We came out and executed,” freshman running back Geno Jean-Paul said. “We did our job, didn’t talk trash, and came out with the win.”

Jean-Paul carried the load in rushing for the Panthers, recording a touchdown. Geno reached the end zone a second time, but the touchdown was called back due to a penalty on the play.

The Panthers were firing on all cylinders right out the gate. The team’s first drive resulted in a score after a lengthy opening kickoff return by sophomore Taylor Ratinaud.

Offense was not the only thing on fire for the Panthers early in the game.The Starr’s Mill defense recorded a sack on 4th down and forced a turnover on downs on the Chiefs first drive of a game.

The Panthers continued to dominate on offense during their second drive. The Panthers pounded the run game down the field and the drive resulted in a rushing touchdown from Layton. The Panthers closed out the first quarter leading 13-0.

In the second quarter the Panther pass rush continued to pummel the Chief running backs and offensive line. The Panthers stuffed the Chiefs on two straight plays and the drive resulted in a punt.

The Starr’s Mill offense continued to dominate with a deep pass to sophomore Ethan Bramblett that set up yet another opportunity in the red zone. Bramblett continued to punish the Chiefs defense with a rushing touchdown set up by his catch.

Defense followed up the touchdown forcing the Chiefs to yet another three and out. Starr’s MIll continued the onslaught opened up by a big run from freshman Geno Jean-Paul. The Panthers pass game proved dominant once again on an impressive catch by junior Jameson Inagawa.

Once in the red zone, the Panthers scored yet another rushing touchdown, this time by Jean-Paul. The Panther pass rush recorded yet another sack to bring us to the end of the half.

“You want to make sure you’re reading the right key, executing whatever play is called,” head coach Zach Mann said.

The Panthers started back right where they left off in the second half, forcing the Chiefs to go three & out on the first drive. The defense continued to smother McIntosh, forcing a blocked punt. The Panthers did not give any slack in the third quarter and scored another rushing touchdown by sophomore Taylor Ratinaud.

In the fourth quarter, the Panther defense finally cracked and the Chiefs scored their first touchdown of the game and converted a two-point conversion to make the game 41-8.

The Panthers played an all around fantastic game and blew out the Chiefs 41-8.

Starr’s Mill played Northgate on October 13 and won 34-12. The win sets up a league championship match up between the Panthers and the Whitewater Wildcats on October 21. The game begins at 5:30 p.m. in Panther Stadium.