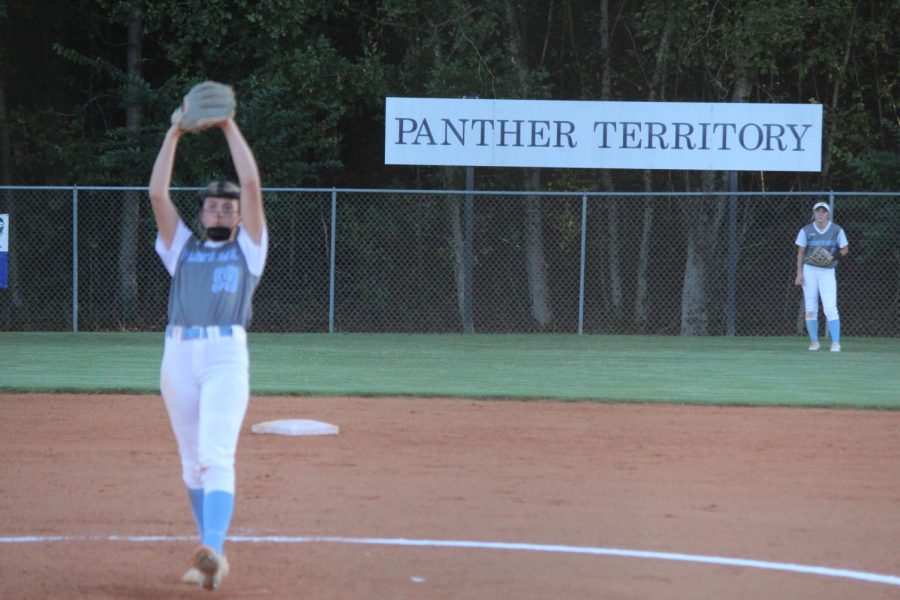 After a two-game sweep of Locust Grove, the Lady Panthers looked for another win against Jackson County in round two of the GHSA state playoffs. Courtesy of a quick lead in game one and a home run in game two, the Panthers swept Jackson County 7-0, 5-2 and advanced to Columbus.

“Usually a lot of times if we get ahead we might lay down and stop playing hard like we’re supposed to,” senior third baseman Julia Cliff said. “This game we kept playing [at] full speed.”

The Lady Panthers began game one by jumping out with a 2-0 lead. With another two runs earned in the bottom of the third, the Panthers maintained their 4-0 lead until the sixth inning.

Game one ended in a 7-0 Panther victory. In the game, Backes gave up two hits and two walks while striking out 19 batters.

“It was exciting to play our last home game here because we weren’t sure if we would with the region ending,” Backes said.

Game two against Jackson County started out slow until the second inning where senior third baseman Sarah Latham hit a home run. Along with another score by senior catcher Ashley Sikes, the Lady Panthers ended the second inning 2-0.

“I think we battled hard,” Sikes said, “Even when they came back, we didn’t let that get us down.”

With the bases loaded in favor of Jackson County, they were able to score two runs, leaving the final score at the end of the fourth 3-2 in Starr’s Mill’s favor.

In the top of the sixth inning, Delaney and junior left fielder Emily Quina got on base. With a hit from senior outfielder Sydney Blair, Delaney and Quina were able to score, increasing the Lady Panther lead to 5-2.

Backes struck out the final three batters in the bottom of the seventh to seal the victory, 5-2.

With a two-game victory over Jackson County, the Lady Panthers will travel to Columbus to play in the double-elimination championships. Their path to a state championship begins at 3 p.m. on October 28 against Woodland.