At the ‘tip’ of momentum 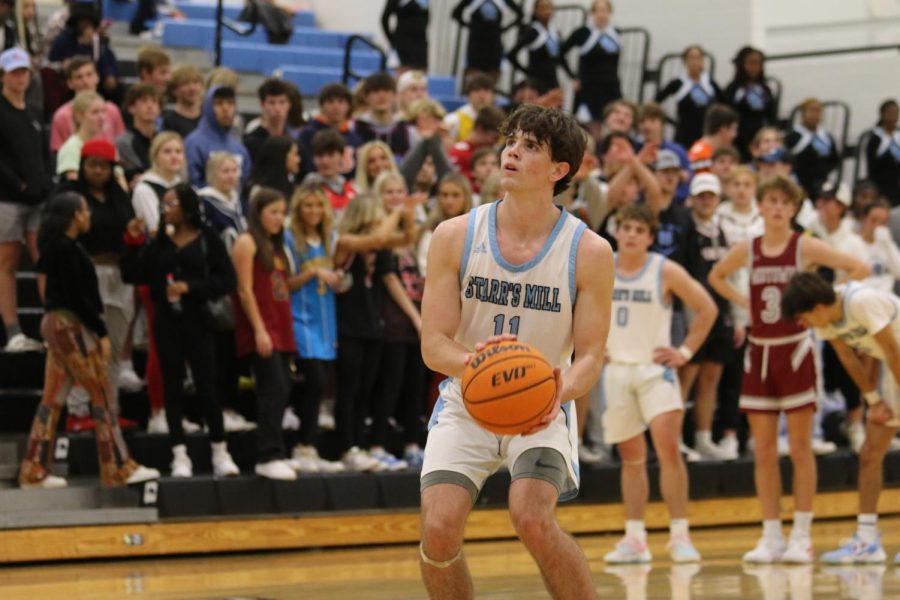 Senior Evan Courvile prepares to shoot a free throw. Starr’s Mill hosted the Tip-Off Classic by Adidas and went up against Midtown in the final game of the night. The Knights capitalized on a slow third quarter by the Panthers, winning 66-46. “Midtown was a good team [athletically],” head coach Joshua Reeves said. “I think they caused us to change a lot of the shots we wanted, and because of that we couldn’t finish very well.”

To begin the regular season, the Panthers went head-to-head with the Midtown Knights in the Starr’s Mill Tip-off Classic by Adidas. Both teams started strong, but the Panthers lost momentum in the third quarter, allowing the Knights to walk away with the 66-46 win.

“[We are] finding out our strengths and weaknesses, what are we good at, what are we poor at,” senior Ethan Scarbourgh said. “That way we can go into practice and practice hard on those weaknesses so that way we’re a better overall team.”

Scoring was mostly back and forth throughout the first half with the Knights holding a slim 28-24 lead at halftime.

Starting off the second half the Panther momentum was lagging. Missed chances increased, and Midtown jumped ahead on the scoreboard. Midtown controlled the court throughout the fourth quarter, keeping Starr’s Mill from gaining any traction. The Knights won 66-46.

“Our team motto is hustle,” head coach Joshua Reeves said. “Our scrimmage game went very well and we hustled our tails off and did exactly what we wanted to, so maybe our team motto will revolve around hustle.”