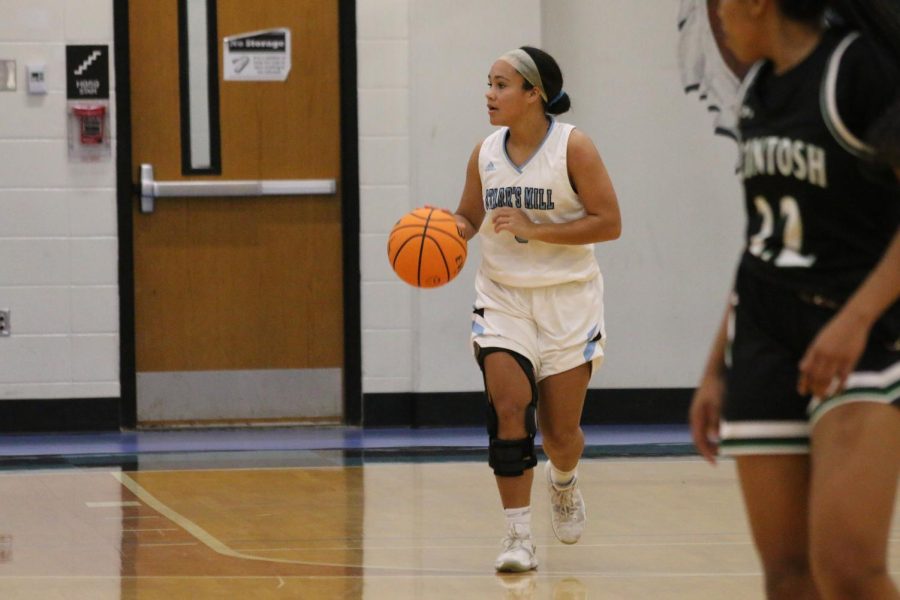 Senior Carrie Consolino brings the ball up the court. In their second region game of the season, Starr’s Mill lost to the McIntosh Chiefs 43-29 despite attempts to push back against the Chief defense.

Attempts to push back against the McIntosh defense came up short as the Starr’s Mill Lady Panthers lost to the Lady Chiefs 43-29.

“We still have a lot to work on,” head coach Emily Sweeney said. “We’re still young, so we’re just going to keep working on the things that we need to work on.”

Leading the team for the Lady Panthers was senior Jaclyn Hester with 12 points. Other high scorers were senior Carrie Consolino with 10 points and sophomore Sunny McQuade with four points.

“Once we play together more I think that we’ll be able to play better and come out stronger the next game,” Hester said.

The Lady Panthers started slow in the first half, allowing McIntosh to quickly gain the lead. Defense began to pick up in the second quarter but was no match for McIntosh’s defense. The second quarter ended 28-13 in favor of the Chiefs.

The Lady Panthers became more aggressive in the third quarter, trying to push back against the Chief defense. Consolino kept up the bulk of the Starr’s Mill defense, stealing the ball multiple times to help the Lady Panthers start to close the gap. However, it was not enough for the Lady Panthers, ending the game in a 43-29 loss.

“I think that we kind of just got our head in the game more and kind of woke up a little bit and started playing harder,” Hester said.

Starr’s Mill is now 0-2 in region play as they travel to Griffin on December 10. The team travels to San Destin, Florida, December 27-30 to play in the SanDestin Holiday Tournament.