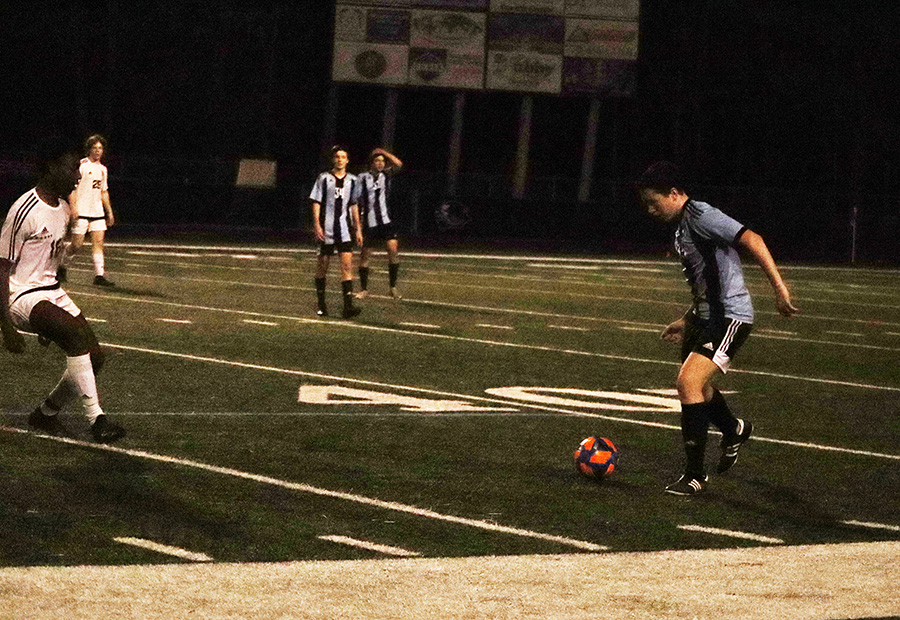 Defender Zach Peavyhouse attempts to move the ball up the field. McIntosh had possession of the ball for most of the game, leaving Starr’s Mill with few scoring chances.

Coming out of a 0-0 tie against East Coweta, the JV soccer team lost to McIntosh in a 3-0 shutout.

McIntosh started off the game with plenty of pressure. The Panthers withstood the pressure until the 15th minute when McIntosh’s Gabe Mawanda scored the first goal of the game.

Starr’s Mill continued to offset the pressure put in place by McIntosh, until Aaron Ajie scored near the end of the first half. The Chiefs led 2-0 at halftime.

“We could be more physical and play out of the back more,” defender Gavin Vu said.

Going into the second half, the Panther defense improved and kept pace with the Chiefs In spite of these improvements, McIntosh still controlled possession and limited Starr’s Mill scoring chances.

McIntosh closed out the game with a goal by Luke Oakland and secured the win, 3-0.

“I really hope we win our last game,” Vu said. “I hope we actually play together and not get mad at each other.”

The Panthers are 6-3-1. They will play their last game of the season tonight at home against Woodward Academy at 7:30 p.m.