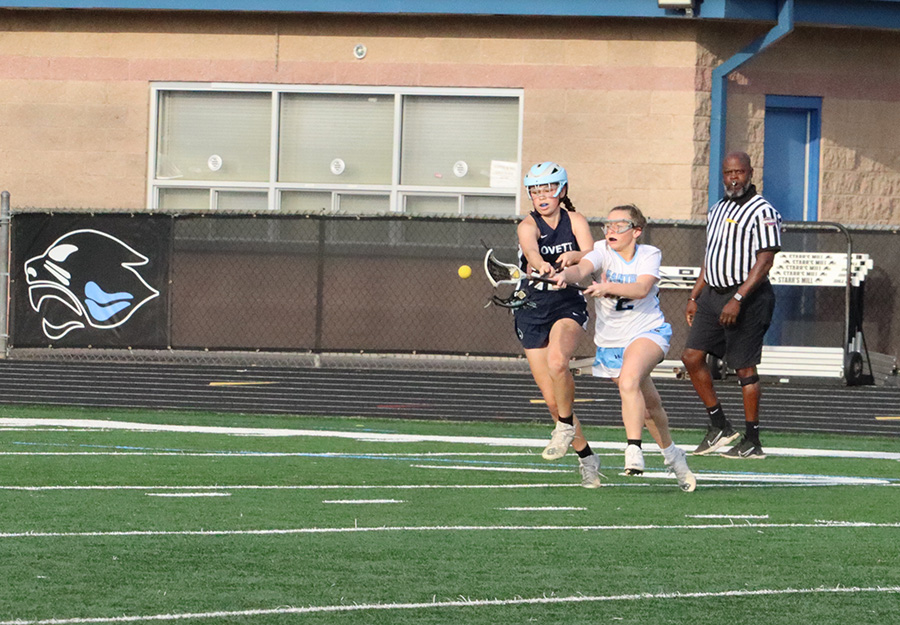 Two players fight for possession of the ball. Starr’s Mill utilized a quick lead and solid control of the draw to defeat Lovett 14-10.

JV girls lacrosse controlled the tempo of last week’s game versus Lovett, leading to a 14-10 win.

“If you get a fast break you can go on every draw you win,” head coach Tony Kluemper said. “Controlling the draw just really helps keep the game in your favor.”

Francie Lovein and Virginia Madden each had a hat trick to lead the Lady Lions in scoring.

“We have a lot of girls who can take the ball to the cage,” Kluemper said. “We don’t have one player who’s just continuously scoring all of our points. We have a lot of people who have the ability to score.”

Starr’s Mill scored twice in the first two minutes of the game. Lovett then responded with two goals of their own to tie the game at 2-2. After scoring the next two goals, the Lady Panthers controlled possession and maintained the lead. Starr’s Mill was up 7-4 at halftime.

“The team has been working on ground balls and passing,” Stone said.

The Lady Panthers again scored a pair of goals to begin the second half and extend the lead. Despite Lovett scoring four of the five final goals in the game, it was not enough. Starr’s Mill won 14-10.