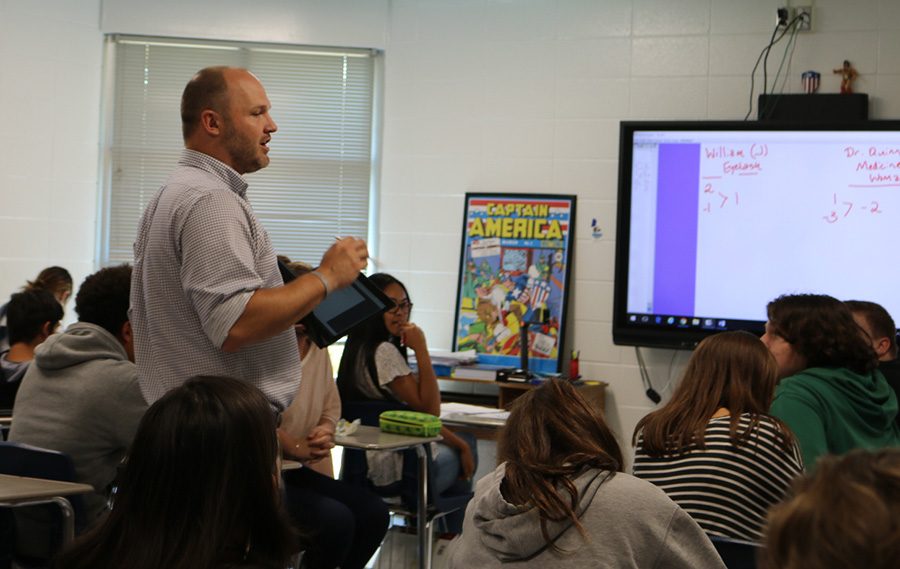 History teacher Josh Reeves lectures during one of his classes. Reeves joins the Starr’s Mill faculty after 13 years of teaching at Morgan County High School.

This is his 14th year teaching, although he spent 13 years teaching in Morgan County. He moved here to be closer to his parents now that he has children.

“My parents live in Pike County, and so I moved here to be closer to them,” Reeves said. “We have kids now, so they want to see their grandchildren.”

Outside of school, Reeves is a big movie person. His favorite actor is Emma Stone. He also loves to golf. When asked If he could spend the day with any four people, dead or alive, he chose wisely.

“Arnold Palmer, Emma Stone, I love her, someone super interesting like Mark Cuban. Maybe like a former president,” Reeves said. “Obama’s a golfer we could get him out there, too.”

Reeves enjoys teaching his students while letting them learn in their own ways. He believes kids should enjoy class, while still getting everything done.

“I try to make history relevant and interesting to the kids, trying to come up with some sort of situation that would mirror what they did like a metaphor.”

Reeves is excited for this year, and years to come. He wants to fit in and for kids to appreciate being in his classroom.

“Being the new guy you’ve got to just fit in. Not being an outlier, not doing anything crazy. Hopefully, my kids enjoy my class. That would be ideal.”