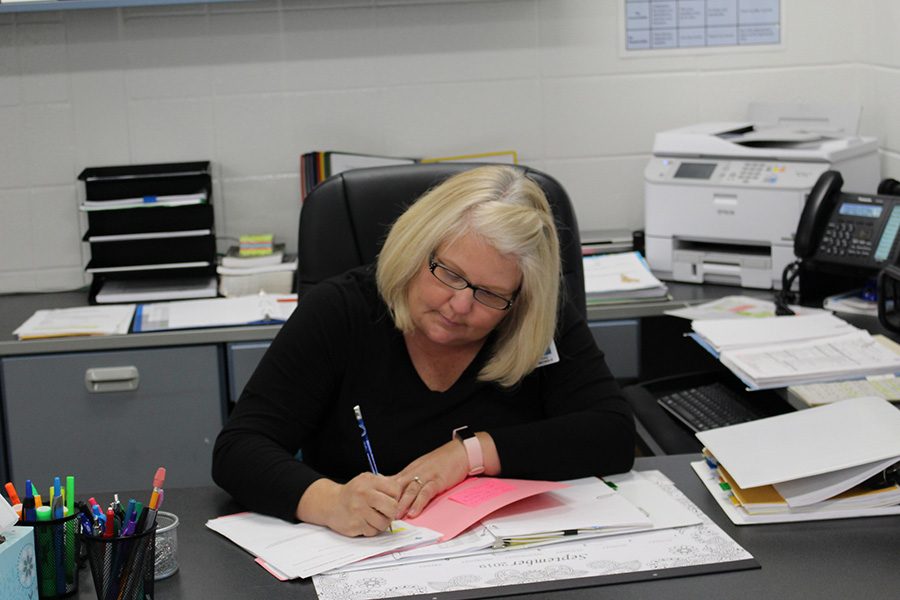 Athletic secretary Stacy Nichols completes paperwork at her desk. Nichols has worked as a secretary since 1994, and now moves from Oak Grove Elementary to the Mill.

“A lot of people may think that a secretary is not a very important job, and I just feel like anything that I could take off of [athletic director Shane Ratliff’s] plate to allow him to really focus on the bigger things,” Nichols said.

Nichols has lived in several areas around Georgia, including Fayette, Coweta, Fulton, and Douglas County.

Nichols has worked for the Fayette County School System as a secretary since 1994. She started at Burch Elementary, moved to Oak Grove Elementary, and now makes the move to Starr’s Mill.

This year will be her first working at a high school, but her philosophy is the same.

“I really believe in being kind,” Nichols said. “You can have a difference in opinion, you can see things differently, but you can always be kind to somebody no matter what.”

Nichols loves to read, preferably easy reads, and also enjoys trips to the movie theater. A favorite memory of hers is going to the theater and watching numerous films back to back.