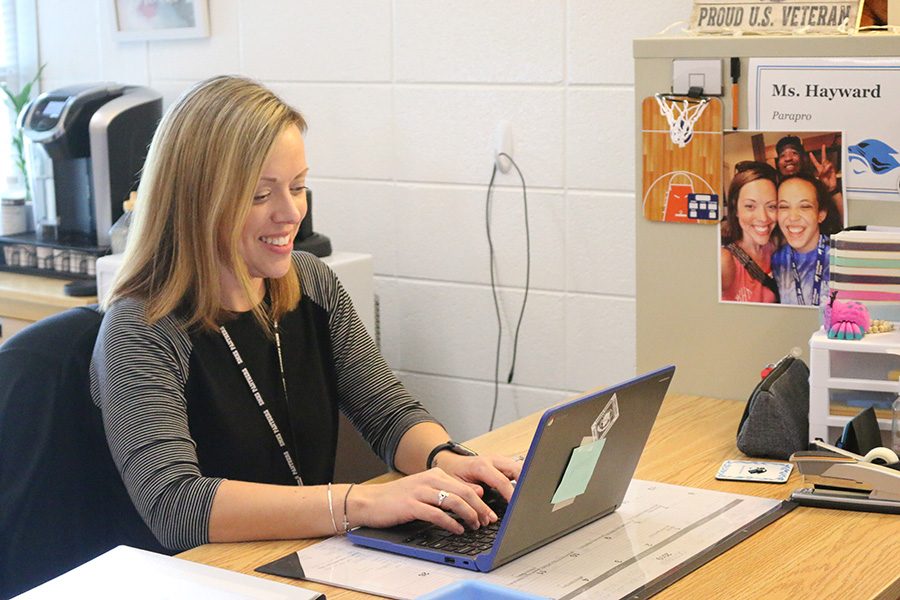 Hayward is a paraprofessional and an assistant coach for basketball cheer. She began working in Fayette County last January after spending time in the Air Force and at home raising her daughter.

Kristie Hayward started working for FCBOE in January 2019 where she was assigned to Rising Starr Middle School as a paraprofessional. She came to Starr’s Mill at the beginning of this school year.

“I enjoy working with students as they prepare to transition to life after high school and was excited to have an opportunity to work with students in this phase of their lives,” Hayward said.

Hayward grew up in Pittsburgh, Pennsylvania. She joined the military after she graduated from the University of Pittsburgh. During her military career, Hayward moved from living in South Carolina, to New Mexico, Germany, and Texas, before she reached Peachtree City.

She was a logistics readiness officer and an executive officer in the Air Force for over ten years and also spent time as a stay-at-home mother before she became a paraprofessional. Though she loved the time in the Air Force, her husband’s job moved her family to Georgia. It was a tough decision, but the best decision for her family.

She has one daughter named Mackenzie, an eighth grader at Rising Starr Middle School.

Hayward also works with Coach Heather McNally, the head coach of the Starr’s Mill cheerleading program, and with the athletes on the basketball cheer team.

“Working full time and coaching requires careful time management and a lot of pre-planning,” Hayward said. “But when you love what you do, the extra work is worth it.”

In addition to working as a paraprofessional and an assistant coach, she also enjoys spending time with her family, running, and reading.

Hayward’s motto by which she lives by is, “Hard work pays off, kindness matters, and a smile can make your day better.”