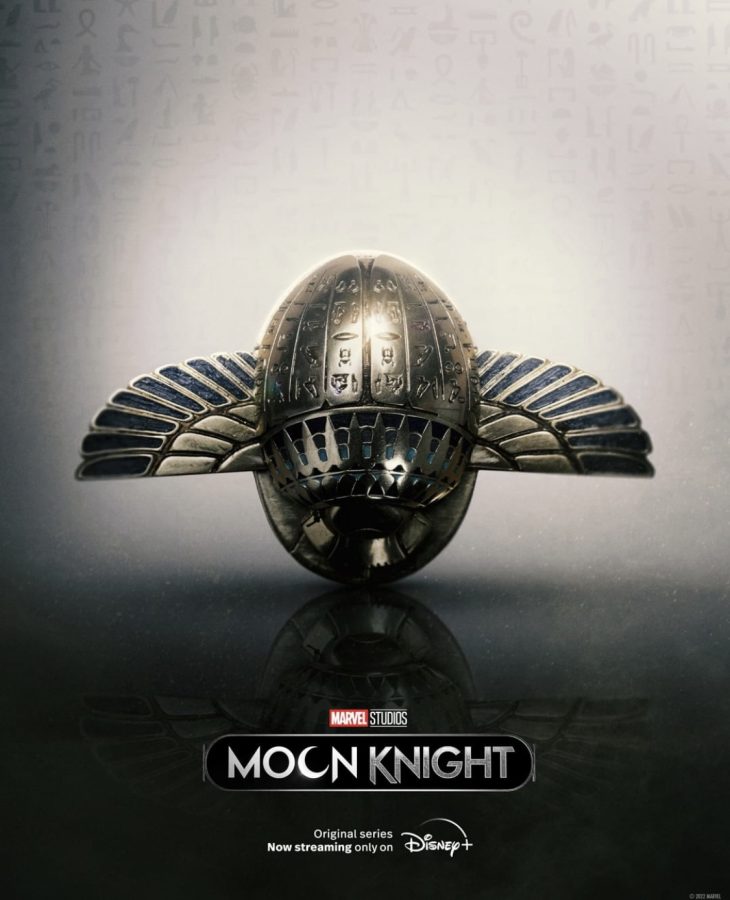 Marvel Studios’ poster for episode two featuring the golden scarab. The golden scarab was an underlying theme throughout the episode and was revealed to play a huge part in both Harrow’s and Khonshu’s overall plan involving the search for Ammit’s tomb.

After the first episode ends with Moon Knight surfacing for the first time, Steven spends the next episode figuring out how to balance Marc in his life.

This second episode explains a lot of mysteries from the first episode and also highlights Steven’s constant struggle against Marc’s efforts to take full control.

Steven ends up finding Marc’s storage locker where he has stored weapons, a passport, and money in a duffel bag. He also discovers the scarab, which points to the direction of Ammit’s tomb and cements Steven’s belief that it truly is real.

The audience then learns Marc’s true purpose, serving Khonshu, the Egyptian god of the moon, and his efforts to find Ammit.

After Steven escapes Khonshu, the mysterious caller named Layla shows up and it is revealed that she is Marc’s wife, leaving fans to wonder just how long Marc has been inhabiting Steven’s body. Layla is also aware of Marc’s abilities and has been fighting with him side by side to find the scarab.

Khonshu later makes a full-blown appearance once Steven reaches Arthur Harrow’s cult and has some sort of grudge against Harrow. It turns out that Harrow was Khonshu’s former “avatar,” and Marc has taken his place.

Steven later relinquishes control to Marc after being unable to defend himself against the jackal and Steven is now in the reflection. The roles have been swapped, leaving fans questioning how long Marc will be in power. The second episode ends with Marc in full control in Egypt, in a search for Ammit’s tomb with Khonshu.

This second episode of “Moon Knight” took the mysteries from the first episode and allowed more information. By the end of the episode, fans were left with even more questions and different mysteries to discover.

To wrap up this week’s episode, here are the top five things to keep in mind going into next week.