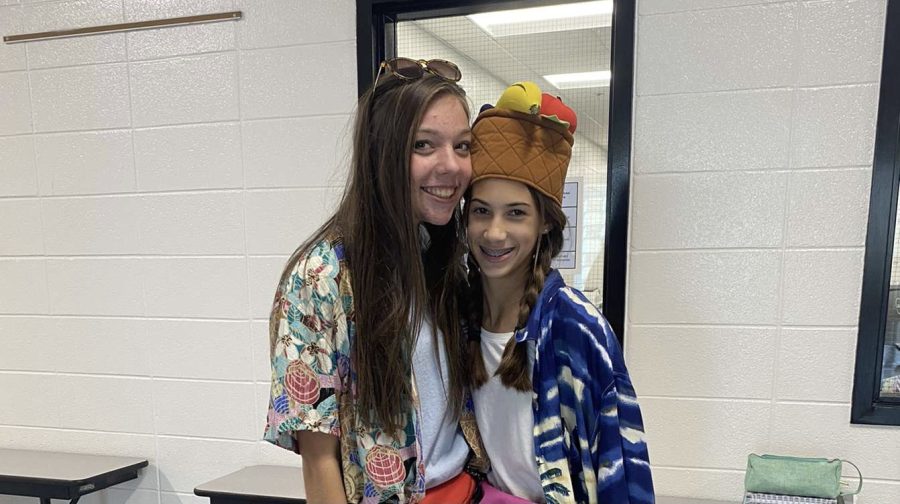 Sophomore Rosie Miller (left) and freshman Emma Arnold (right) pose for a picture in their “Tacky Tourist” outfits. On many dress up days during homecoming week, students break dress code in order to complete their outfits. (Courtesy of Rosie Miller)

Sophomore Rosie Miller (left) and freshman Emma Arnold (right) pose for a picture in their “Tacky Tourist” outfits. On many dress up days during homecoming week, students break dress code in order to complete their outfits.

In general, the dress code that Starr’s Mill enforces is not too extreme. There are reasonable standards such as the four-finger test for shirts, and the below-the-fingertips test for shorts and skirts. However, the administration should become more flexible with the dress code during homecoming week.

If the administrators are going to panic about accessories being a safety hazard, then they should panic about everything or panic about nothing.”

School is not a place for a fashion show. However, during weeks such as homecoming week, the rules should be a little more relaxed. This year, homecoming dress-up days included Decades Day, Tacky Tourist Day, Generations Day, Character Day, and Spirit/Toga Day. Almost all of these days required a hat, accessory, or even glasses to put together a fun costume.

Principal Allen Leonard addressed the entire school Tuesday morning, stating that no hats or sunglasses could be worn in the building or carried in the hallways. Tuesday was Tacky Tourist Day, a day that needed both. The administration should have loosened up and had some fun.

What classifies as a hat? For example, does a tiara count as a hat, or a headband? Nowhere in the dress code does it say that headbands are not allowed. Even so, anything could be classified as a hat. Merriam-Webster classifies hats as a head covering with a definite crown and brim. Therefore, a tiara is not a hat. But it covers the head and has a definite crown. And what about an actual headband?

Even Rising Starr Middle school has a day designated for hats. If the administrators will not let students and even teachers wear hats as a part of a costume, then they should at least create a hat day. Even if they do not, they should still let students carry their hats in the halls to show their friends.

I understand that sunglasses are a potential safety hazard, but so are many other things such as untied shoe laces and heels. Also, dangling necklaces and bracelets can be a hazard on school buses and in classrooms. If the administrators are going to panic about accessories being a safety hazard, then they should panic about everything or panic about nothing.

If the administration insists on no hats, they could create a “Hat Day” specifically so students can wear hats, clarify the rules on size or type, or at least allow students to carry them in hallways during homecoming dress up days.

Dress code is detached from reality

The dress code overall is a bit too severe. Even during homecoming week, where the dress code is not really enforced, it is still too strict. It has a twisted sense of reality, and has recently come under fire for its oppressive nature.

How are students supposed to express themselves when basic types of clothing are forbidden?”

I have nothing against the majority of the dress code, but recently, the school, through the yearly homecoming week, encouraged students and teachers to dress up and express themselves. However, I saw students get yelled at for partaking in dressing up during the week’s many themes for wearing even simple, normal articles of clothing. How are students supposed to express themselves when basic types of clothing are forbidden?

Hats and other head coverings like hoodies are not allowed. People have worn hats for literally thousands of years, and hoodies are even built into other pieces of clothing, but still students do not have the right to put head coverings on during school. It is as normal as someone wearing a shirt or pants, and some religions even promote wearing head coverings. As long as it is not outlandish and distracting, just like every other article of clothing students wear, I do not see why it would be a problem.

Glasses too, are not allowed, unless for a medical reason. When you have a religious or medical right to do something, everyone else should have that right too. First Amendment or medical exemptions should be used to counter arbitrary and authoritarian rule policies. There’s zero reason why only some people can wear glasses, but others cannot. Just because someone has a disability does not mean they should get extra privileges over everyone else.

It took a whole pandemic in order for students to gain the right to wear a face covering to school. The school concedes any counter point they may make about ensuring a safe school environment with the dress code when they have mandated mask wearing for the past two years, with no clear way to easily identify students.

It is not rational how both teachers and students can hide their identity by wearing a face covering, but other, much less dangerous types of clothing, are still banned. You can hide who you are, but you cannot wear a baseball cap to support your favorite sports team. How are we allowed to cover our faces and hide our identity but not our head? It does not make sense.

The dress code wants to establish and enforce an opinionated status quo, what the school views as normal, and keep out anything they do not think fits their perception of normal. They worry giving more lenience with the dress code would disrupt the learning environment. The problem with this though is that their sense of normal is far from what students view from normal, as evidenced by the outrage and controversy the dress code has been generating from the student base.

If clothing or otherwise does disrupt the learning environment in any way, I am all for banning it from our school. But in most cases, the dress code is overreaching and a serious discussion needs to form in order for it to be updated.