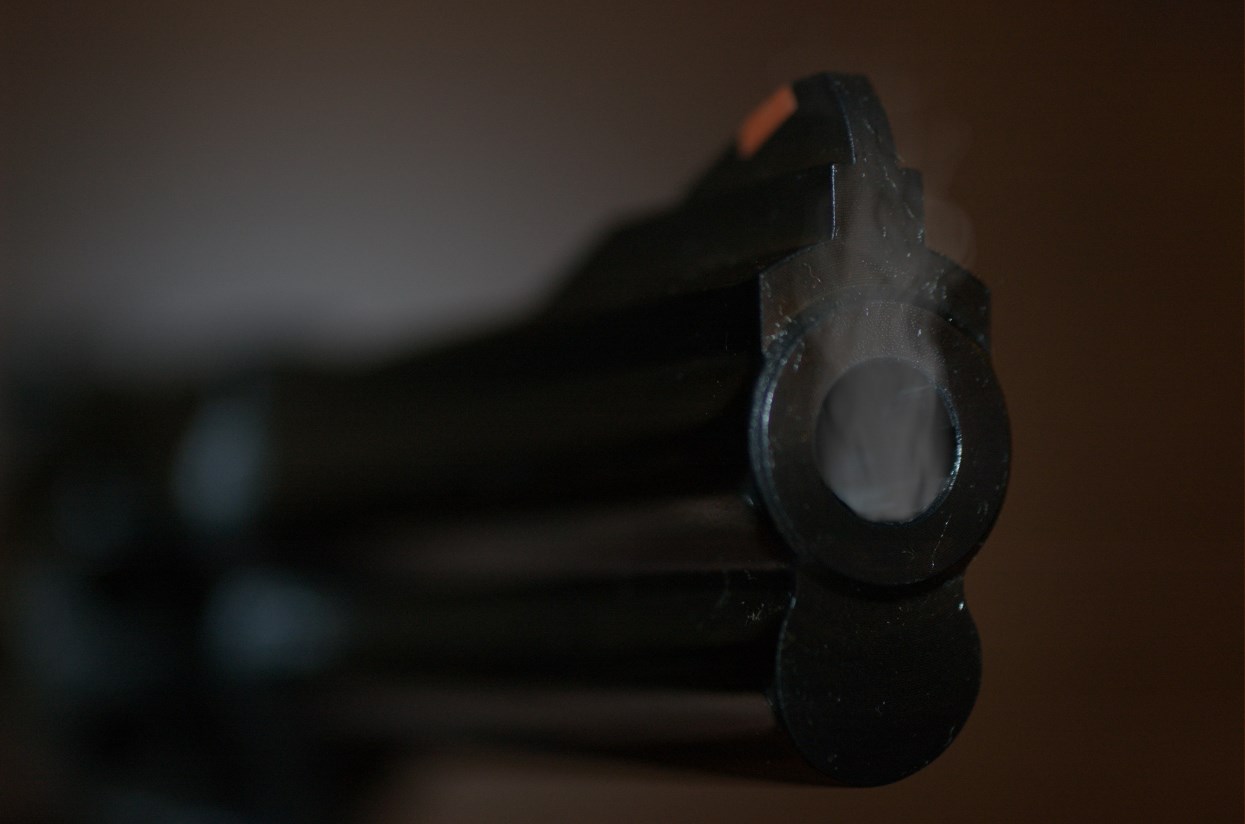 Smoking barrel of a recently fired gun. The gun debate has raged across America since the beginning of the country. ("smoking gun" by Plasticsturgeon is licensed under CC BY-NC-ND 2.0)

Smoking barrel of a recently fired gun. The gun debate has raged across America since the beginning of the country.

"smoking gun" by Plasticsturgeon is licensed under CC BY-NC-ND 2.0

Guns are a controversial topic in today’s world. In the United States, you are required to be at least ages 18-21 to be able to purchase a gun. Gun use should be regulated and only certain people should be allowed to own guns.

Looking at just this year alone there have been over at least 300 mass shootings, not including just regular shootings, which are already bad enough. Gun violence is a serious problem in today’s world. More than 500 people die each day because of violence committed with firearms.

The Columbine shooting occurred on April 20, 1999, in Littleton, Colorado, which resulted in the killing of 13 people and more than 20 people wounded. Eric Harris and Dylan Klebold dressed in trench coats and began shooting outside the school. They then began to enact their rampage. These killers got their weapons from a gun show and if guns were more heavily regulated this event would have never happened.

There have been many reported cases of children finding a parent’s guns and accidentally shooting themselves or others. In just 2022, there have been 21 separate cases of unintentional gun incidents by children, which has led to 22 casualties that could have been avoided if only stricter regulations were in place.

In another case, two young cousins lost their lives due to guns. During a birthday party, Paris Harvey and 14-year-old Kauron Harvey were in a bathroom where they found a gun and decided to show it off as a joke. Paris had put the gun to Kauron’s head without knowing the safety was off and accidentally shot him, killing him instantly. After this, she had entered a state of shock trying to process what happened and then accidentally shot herself.

Guns are not the problem, but the people behind them are the problem.”

People with mental illnesses should not be able to acquire guns. People should have to prove that they are mentally competent before being in possession of a weapon that could end lives. It is not their fault that they have mental illnesses, but the stakes of using a gun are just too high.

Guns are not the problem, but the people behind them are the problem. You could have a good person who uses a gun wisely. This means only using it when they are positive that something or someone is going to add harm to their life.

On the contrary, if you are in danger and you need to protect yourself, people will ask what you will use for defense. In order to protect yourself there should be tasers and other things that can temporarily disable someone without killing them.

Owning a gun does increase safety, but not everyone should own one. Because guns can not discriminate against criminals or innocent bystanders we should not have guns at all.

Gun rights need to be secured, not hindered

Guns. Is there anything more American? It was guns that secured our independence, guns that allowed us to prosper and expand from coast to coast, and guns that won two world wars.

The concept is so baked into our country that out of everything our founding fathers could have put in the Bill of Rights, protecting ownership of firearms was top of the list, second only to freedom of expression.

It was guns that secured our independence, guns that allowed us to prosper and expand from coast to coast, and guns that won two world wars.”

Firearms and their proper usage should be taught en masse to students. It is a right protected by the Constitution, but like free speech and religious freedoms, it has been suppressed and attacked by American school systems and the greater American government.

Groups like the Boy Scouts of America have been training member scouts in safe firearm usage for a hundred years. It is catastrophic that the United States protects the right to use firearms but fails to offer firearm usage and safety training classes in schools.

Teaching proper firearm usage would reduce accidental incidents involving firearms and allow more people to be able to defend themselves from criminals. If more people were trained to use firearms, especially at an early age, crime would be reduced significantly as a result.

If the thought of having firearms in schools sounds scary, you might have been conditioned by fear propaganda to react negatively. The mainstream media tends to sensationalize hostile shooter events with calls to restrict firearm access without looking at the facts first.

Calls to defund, and effectively disarm, our police forces have led to the biggest crime increases in United States history. There is a reason why cities with the most restrictions on firearm ownership also have the highest gun incident rates in the country. Gun control policies have been tried and have failed.

It is only reasonable to assume that criminals with no regard for America’s laws are not going to follow any additional gun control laws that end up making law-abiding citizens less safe. This is why firearm control policies will never work, especially with how gun-oriented American culture is.

Gun rights need to be expanded in the United States and not restricted by those with personal armed security forces. Firearms are the ultimate self-defense protection and deterrent, and it is vital that schools allow students to practice exercising their constitutional rights in a controlled environment.