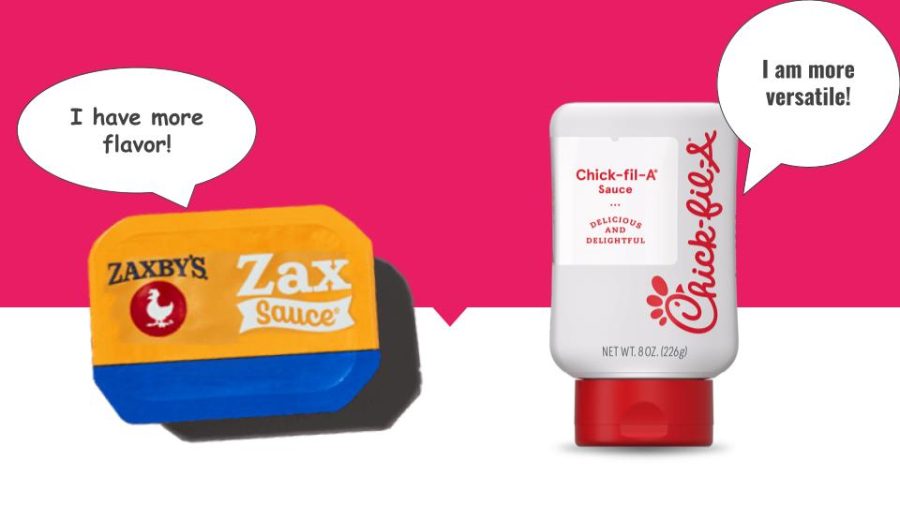 Sauces which are a spicy delight

Zaxby’s has left a permanent mark on me after working there for about half a year and in this time I have consumed just about every sauce on the menu.

They have a much wider and tastier collection of sauces than Chick-fil-A’s, including Zax Sauce regular and spicy, Honey Mustard, BBQ, and the wing sauces, Wimpy, Tongue Torch, Nuclear, Hot Honey Mustard, Teriyaki, Sweet and Spicy, and the amazing Buffalo Garlic Blaze.

I will admit that Chick-fil-A sauce is a better pick when it comes to signature sauces, but where Zaxby’s truly triumphs is with its wing sauces. ”

Zaxby’s has regular chicken sauces and wing sauces which can be mixed and matched at the customer’s discretion. Chick-fil-A has two good sauces while Zaxby’s has seven.

The original Zax Sauce and the spicy Zax Sauce are their signature sauces that cannot be found anywhere else. This light-colored sauce is perfect for both chicken and fries at the same time with an original flavor no other restaurant comes close to replicating.

I will admit that Chick-fil-A sauce is a better pick when it comes to signature sauces, but where Zaxby’s truly triumphs is with its wing sauces.

Making your Fingerz tossed is a perfect way to zestify your meal and add an interesting twist to the already insanely well-seasoned chicken. You can toss them in any of the wing sauces or BBQ.

While working there I pilfered many of the sauces and brought them home to use on my own meals made at home. Zaxby’s also offers much more sauce in a container than the pitiful Chick-fil-A sauce thimbles. Instead of using 1-2 sauces per meal, Zaxby’s only needs one and you will still have leftover sauce.

Zaxby’s only has one fail for a sauce and that is the Tongue Torch because it is much too acidic. On the other hand, Buffalo Garlic is the perfect medium sauce. It kicks you right off the bat in the taste buds, yet is a thicker sauce than the Tongue Torch so it flavors the food much better instead of making your food soggy. Zaxby’s easily beats out Chick-fil-A when it comes to sauce selection and flavors. Chick-fil-A’s biggest triumph over Zaxby’s is held with the original sauce, whereas Zaxby’s wing sauces completely stomp out the competition.

Sauces which are a pleasure

As Chick-fil-A’s popularity has spread across America, happy customers are pleased with the simple menu options and the classic sauces which add joy to any meal option on the menu.

Due to the demand and popularity, it is no wonder Chick-fil-A started to sell its sauces. If a Chick-fil-A sauce lover were to blindfold themselves and dip a chicken nugget into a collection of store-bought sauces such as ketchup, mustard, mayo, and a Chick-fil-A sauce, it would easily be distinguished from the other grocery store sauces, due to its uniqueness and enjoyability.

The smoky tang of the Chick-fil-A sauce and the perfect amount of sweetness in the Polynesian sauce are the best flavors to add to a chicken sandwich or nuggets.”

As someone who always hoards the two iconic sauces, I can positively say they taste good on eggs. I also eat them with frozen nuggets or other fast food chicken and fries, because they truly are delicious sauces.

After years of eating Chick-fil-A and dipping chicken into their sauces, in comparison, Zaxby’s sauces do not taste like anything to me. The spicy sauces are disappointing and only offer a slight sting on my tongue. The Zax Sauce also tastes strange, and similar to Chick-fil-A’s sauce, except not as satisfying as the chicken.

Whenever I order from Zaxby’s, I dip their chicken into Chick-fil-A’s signature sauce or Polynesian sauce, because it tastes better that way. I prefer the stronger flavor. Chick-fil-A’s sauces have a longer-lasting flavor that lingers in my mouth long after consuming my meal, which is why I love their sauce.

Chick-fil-A sauces beat Zaxby’s easily in terms of their flavor and uniqueness.

If Zaxby’s wants to pick up their sauce game, they are going to have to add a lot more zest to their signature sauce, and a bigger kick to their spicy options. Chick-fil-A sauces all around have more flavor and kick. In addition to this, the sauces can go on anything, so the possibilities are endless.