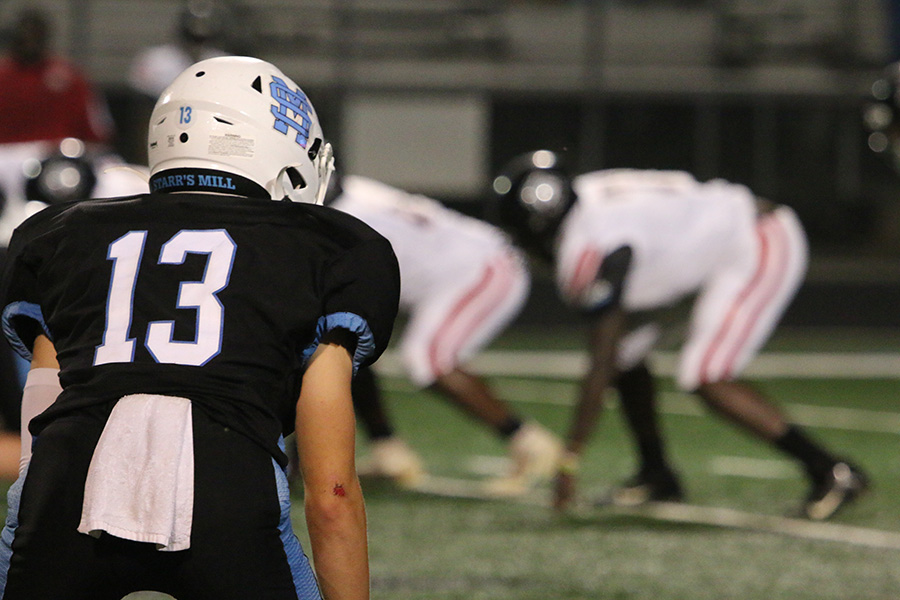 Senior cornerback Jonathan Higle prepares for an upcoming snap during their home game against the Mt. Zion Bulldogs last Friday. The Panthers steamrolled Mt. Zion 35-0 their first victory of the season. In this game, a new name rose to prominence in style, and the defense stayed strong against a crafty scrambler. Unlike most Starr’s Mill games, it was the opponent that was taking control of the game clock while the Panthers coasted with rapid-fire rushing touchdowns.

Last week, the Panthers wanted to take their foundation established against East Coweta and get back to work and improve. Their work paid off in a shutout over the Mt. Zion Bulldogs 35-0. Here are three takeaways from a dominant Panther victory.

With several new talents on the offense, senior Devin Barnett made his name known. In his second start with Starr’s Mill, he took the ball in five carries for 134 yards and three rushing touchdowns. He has proven that he is a fast back with unrivaled topspeed.

[Devin Barnett’s] an explosive playmaker and people are gonna have to deal with him.”

“[Barnett] is a national level decathlete. There’s not too many people out there like that,” offensive coordinator Burt Waller said. “He’s an explosive playmaker and people are gonna have to deal with him, which’ll take pressure off Brandon [Mathis] and [Colin] Bartek and [Will] Yarbrough to have to carry a certain amount of the load. [Defenses] will pay attention to him.”

More than what he is able to do on his own, Barnett adds another option for the Panther offense. We’ve already seen what junior Brandon Mathis can do, and we’re just starting to see what Yarbrough brings to the table under center.

Holding on to the ball was a big issue for the Panthers in week one, and they fixed that this week by not losing a single fumble. If they continue to grind out any other quirks they may have, the offense has the potential to be a thing of beauty.

The Starr’s Mill defense pulled out another great performance with their first shutout of the season. They limited the Bulldog offense to 196 total yards and senior safety and Duke commit Cole Bishop hauled in a safety at the end of the second half.

However, it was not complete domination. Mt. Zion controlled over half an hour of game time. A lot of that has to do with their senior quarterback Taariik Brent scrambling over the Panther defense. Brent had 22 carries for 127 yards. In their lengthy drives, Mt. Zion was pulling off long, incremental drives that kept them on the field with one fourth down conversion after another.

Then again, a shutout is a shutout. No amount of time the Bulldogs spent on the field could get them into the end zone. Though the Panther defense could not get consistent three and outs most of the game, they bent, and bent, and bent. Yet, they never broke. That is indicative of the power in resilience this defense possesses.

Starr’s Mill has always gone with a tried and true gameplan: shut down the opponent on defense, and milk the game clock with a strong rushing attack. This week, it seemed to be the exact opposite. In fact, through the first three quarters, the Panthers did not have a single drive over two minutes.

Starr’s Mill has always gone with a tried and true gameplan: shut down the opponent on defense, and milk the game clock with a strong rushing attack.”

“Every play we draw up is designed to score a touchdown, it just doesn’t always happen like that,” Waller said. “Every once in a while you’ll get a team that overpursues or presses the line of scrimmage so hard like [Mt. Zion] did tonight, so once we pop it there’s nobody left. You end up with big plays, and that’s what we got tonight.”

Sure, this type of game was definitely different from what Starr’s Mill is used to playing. On the other hand, how much time do they need to maintain when you have Barnett blazing down the field for three scores?

More than anything, this game showcased that this team has the pieces to dominate. We did not see everything from the offense, but what we saw from Barnett was extraordinary, and the fantastic offensive line demonstrated why they are a brick wall. Same thing for the defense. They bent, but never broke.

This is a really good place to be for Panther football. They have clearly improved from week one to week two, and made several statements in this game alone. We saw a new lane for the offense in Barnett. We also saw that the defense has it in them to make a shutout happen.

There are two more games left in the non-region schedule. Union Grove, with a 2-0 record and two blowout wins, is going to be a good gauge for where the team is at. Their next game is another tough challenge in Sandy Creek. As we saw from week one to week two, this team has the dedication and willingness to put in the hard work to improve.

This Friday, the Panthers travel to McDonough to take on the Union Grove Wolverines. Kickoff is set for 7:30 p.m. 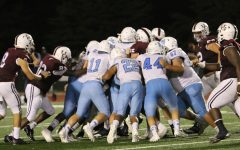 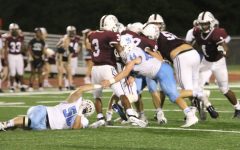 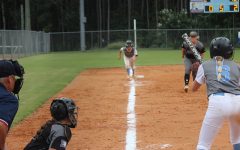 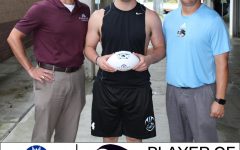