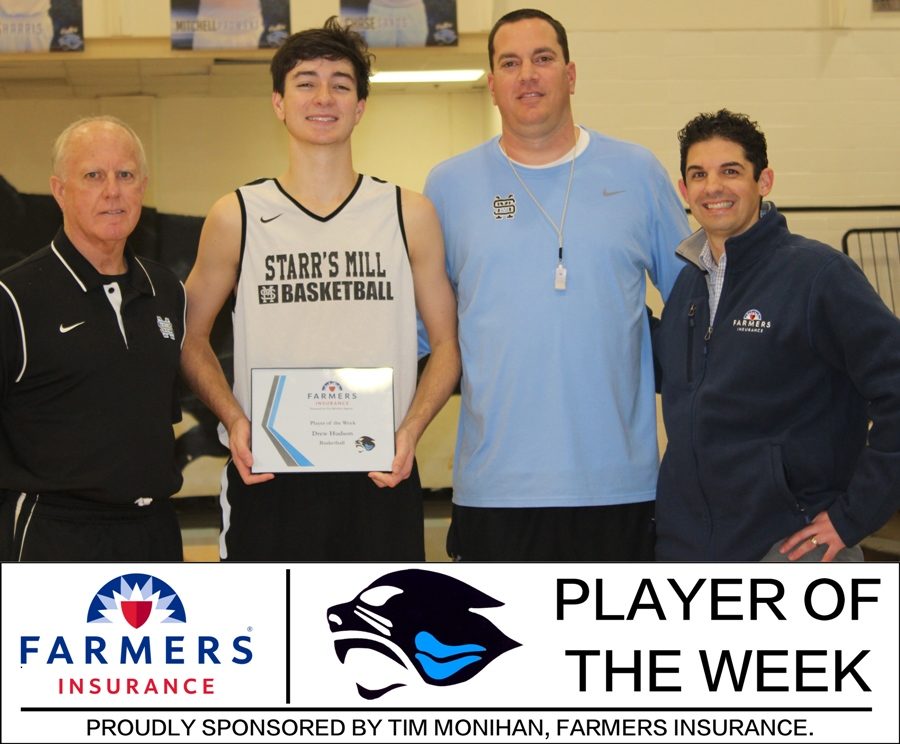 Farmers Insurance selected senior forward Drew Hudson from the varsity boys’ basketball team as the third winter sports Player of the Week. Hudson is playing the best basketball of his high school career while leading the Panthers to a 4-3 start this season.

“[Hudson] has been our leader,” head coach Brandon Hutchins said. “He constantly works hard and plays hard every time.”

Hudson is averaging 17.7 points, 11 rebounds, 2.2 steals, and two blocks per game. While having the ability to score from all over the floor, Hudson is knocking down 48% of his three-point attempts. His all-around game has translated to — wins early in the season, including a second place finish in the North Forsyth Thanksgiving Tournament.

In the Panthers’ only region game this year, Hudson totaled 19 points, 13 rebounds, and three blocks. Despite his performance, Starr’s Mill fell to McIntosh 64-54.

The Panthers will participate two tournaments over holiday break.  First up is the Lambert Holiday Classic beginning Dec. 21.  Then, the team travels to Florida to play in the Hilton Sandestin Basketball Blowout to close out 2017. Following the tournaments, they continue region schedule with games against Whitewater, Morrow and Fayette County on Jan. 5, 6, and 9, respectively.

“We’re doing pretty well this season,” Hudson said. “We have been in every game, but we have had a couple of tough losses.”